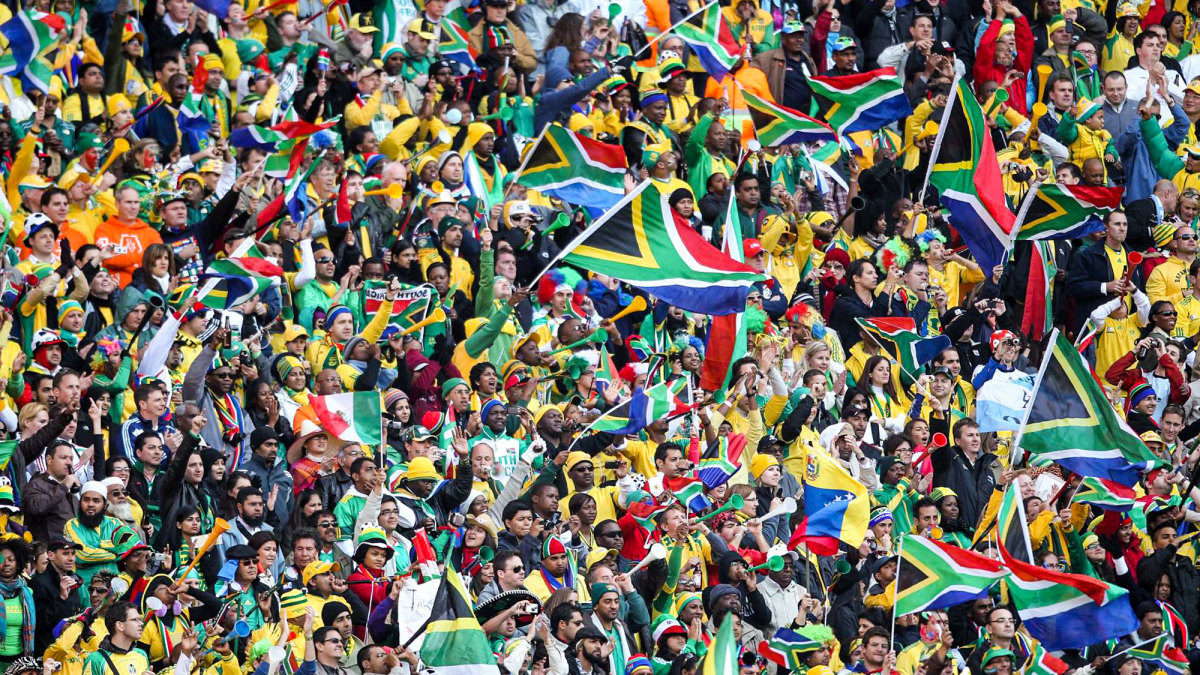 This piece is the first in a series looking back on the 2010 World Cup with a decade’s worth of perspective. Over the coming days, we’ll be dissecting the landmark moments that happened and themes that developed in South Africa and their long-tail legacies.

Briefly, for perhaps 24 minutes, it was possible to believe. The World Cup had come to Africa. FIFA was spreading its arms and embracing the globe, taking the sport into new areas, showing that football really was the world’s game.

Amid feverish excitement in Soweto, the tournament got underway. Siphiwe Tshabalala put South Africa ahead after 55 minutes, with “a goal for all of Africa” as Peter Drury famously and aptly put it on the UK commentary. Don’t examine that too closely, don’t pick it apart: in the moment it felt hugely symbolic.

Then Rafa Marquez equalized for Mexico with 11 minutes remaining, and a sense of realism set in.

But let’s begin with the dream. Staging a World Cup in Africa had always Sepp Blatter’s vision. Blatter, the ex-FIFA president, is now 84 and lives alone in Zurich. He is a slightly melancholic figure these days, chewed up by a world he helped to create. That FIFA was monstrously corrupt under him is undeniable; whether he personally was corrupt is much less obvious. As he would point out, he’s never actually been convicted of anything. And what is often misunderstood about him is that whatever else he may be guilty of, he is, in his own way, a romantic.

It can be argued that he dreamed of an African World Cup because the African bloc within FIFA sustained him in power, and perhaps that is partly true, and perhaps he really did think it would help him to a Nobel Peace Prize, but he also dreamed of an African World Cup because he believed it was a good thing in and of itself. In fact, if Blatter had gotten his own way, the World Cup would have gone to South Africa in 2006. He was defeated by the curious abstention of the New Zealand delegate Charles Dempsey. An investigation into alleged German corruption was dropped last week by Swiss prosecutors under their statute of limitations.

But the reality was always rather different. Vast stadiums were built in cities that simply didn’t need them. New stadiums were built in cities where a pre-existing stadium could have been upgraded. Even three years later, when South Africa took over hosting duties of the 2013 Africa Cup of Nations from Libya, it was clear how many grounds had fallen into disrepair. Basic press facilities had disappeared from Soccer City. The pitch in Nelspruit had been devastated by a fungal infection. In Cape Town, Green Point stadium was losing $1 million a year, and there was talk of converting it into housing, although the arrival of a rugby franchise in 2021 should make it more viable.

When the World Cup was hosted by South Korea and Japan in 2002, it did lead to an improvement in Asian football, or at least in the fortunes of those two nations. Both hosts got through the group stage, and South Korea reached the semifinal. Both have won three games at World Cups since and reached the last 16 in 2010. These are crude measures and the data set necessarily small, but South Korea and Japan have become familiar and respected presences at World Cups. South Africa, meanwhile, hasn’t qualified since 2010. It didn’t even qualify for the Cup of Nations in 2012 and 2017.

Nor has there been anything resembling a surge in African football in general. Ghana, it’s true, would have become the first African side to reach a World Cup semifinal had Asamoah Gyan not smacked a penalty against the crossbar after Luis Suarez handled Dominic Adiyah’s goal-bound header on the line in the final minute of extra-time. But none of the other five African sides made it past the group stage in 2010, while even Ghana would have gone out before the last 16 had Serbia been awarded a penalty it should have earned with five minutes remaining against Australia and then converted it. No African side has reached the quarterfinals in the two World Cups since.

Across the continent, the game remains blighted by poverty, corruption, political intriguing and disorganization. Last year the Confederation of African Football had fallen into such a state that FIFA felt the need to appoint a general delegate to oversee the running of the African game. Perhaps there is a positive in that roughly 10-15 nations now go into each Cup of Nations believing it can win, but the idea of an African World Cup winner is as far away now as it was 30 years ago. The pyramid may have gotten wider, but it is no higher.

Suarez’s handball, perhaps, provided the one iconic moment of the 2010 tournament. It is remembered now for Spain’s consummation, but also for the Jabulani, a dreadful ball that the best players in the world found almost impossible to control, and the constant whine of the vuvuzela. Perhaps just being there was enough. Perhaps there remains a potent symbolism in the game going to Africa. But the World Cup left almost no tangible legacy beyond a phalanx of costly and almost useless stadiums.