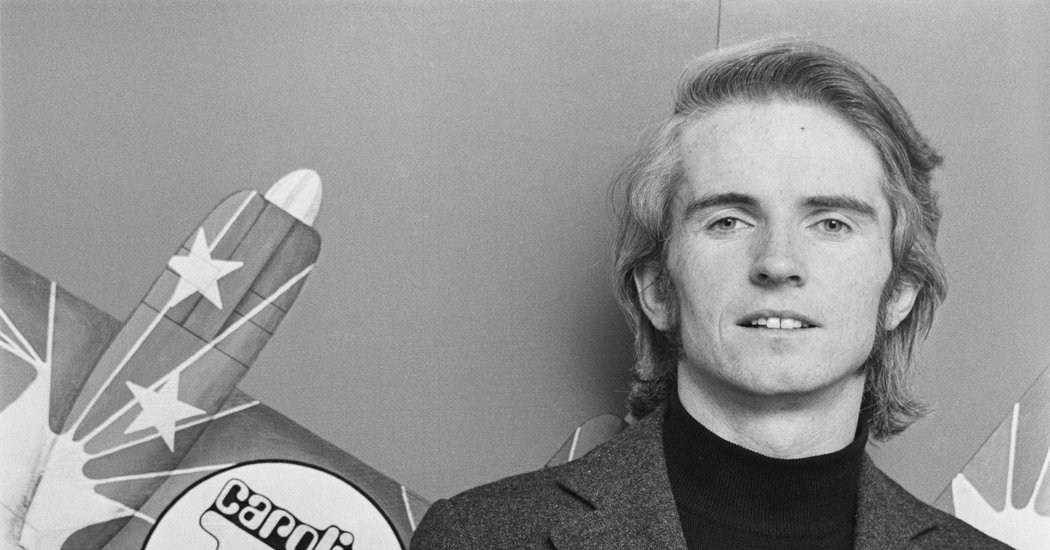 It was on the Saturday before Easter 1964 that Radio Caroline sent out its opening salvo, the Rolling Stones’ cover of Buddy Holly’s “Not Fade Away,” from a rehabilitated Dutch ferry anchored three miles off the coast of England. For British teenagers, used to a bland diet of children’s programs, 1950s ballads and farm news on the BBC — also known by the nickname Auntie — it was a revelation.

And Ronan O’Rahilly, the roguish Irish entrepreneur and showman behind Radio Caroline, who was then just 23, made sure that his operation would become the most famous of the pirate radio stations run from a ragtag armada of ships moored in international waters when the BBC had a monopoly on the airwaves.

Mr. O’Rahilly died on April 20 at a nursing home in County Louth, outside Dublin. He was 79. His partner, Ines Rocha Trindade, who confirmed the death, said he had learned he had vascular dementia in 2013.

Charismatic, deeply eccentric — he was a committed conspiracy theorist and often went by a pseudonym — and with a flair for the grand gesture, Mr. O’Rahilly was at the center of the music scene in London in the early 1960s, or tried to be. He had left his home outside Dublin at 17, worked checking coats in a London night spot, and was soon running his own club, the Scene.

He managed a few acts, too, and when he couldn’t get one of his performers’ records played on the BBC, he began to hatch a scheme to run a pirate radio station from a ship, following the lead of Dutch and Scandinavian operators.

“A hustler of the old school, a King’s Road cowboy,” is how Ian Ross, whose father put up much of the cash for Radio Caroline before it launched, described Mr. O’Rahilly in interviews. In “Rocking the Boat,” Mr. Ross’s 1990 novel based on his experience, Mr. O’Rahilly became a beguiling character called Liam O’Mahoney, “a wolfish idealist who if asked at parties what he ‘did’ would smile terribly and say he was in the why-not business.”

Radio Caroline’s adventures found their way into more than a few books, as well as a 2009 comedy, “Pirate Radio,” starring Philip Seymour Hoffman as a D.J. and based only very loosely on actual events. Mr. O’Rahilly’s character was played by Bill Nighy.

As one story goes, Mr. O’Rahilly named his station for Caroline Kennedy, having been charmed by a photograph of her as a toddler in the Oval Office. Another story proposes that he was inspired by the ideal reader of Queen magazine, a mythical “Caroline” toward whom the editors directed their lifestyle coverage in those days (Queen’s publisher was an early investor in the station). Still another suggests he was inspired by his girlfriend at the time, Caroline Maudling.

As Peter Moore, who has been running Radio Caroline since the early 1990s, put it in a phone interview, “There’s truth, and there’s Ronan’s truth.” (Radio Caroline is now based on land and streams on the internet from an office in Essex.)

It is true that Mr. O’Rahilly was obsessed with the Kennedy family. He had a bust of President John F. Kennedy on his desk — for a time, Radio Caroline’s headquarters were in swanky offices in Soho — and sometimes used the name Bobby Kennedy as a pseudonym. In the last decades of his life, he was at work on “King Kennedy,” a documentary about the assassinations of the Kennedys and Martin Luther King.

Pirate radio of the sort pioneered by Radio Caroline — Top 40 hits, all day long — would go on to be the soundtrack of British and European youth. In the beginning it was a moneymaker, with 20 million listeners and hundreds of thousands of pounds in revenue. Mr. O’Rahilly was no mariner — he suffered from seasickness — and he never spun a record, but he was the station’s handsome frontman and huckster.

In 1967, Parliament passed the Marine Offenses Act, making it illegal to advertise on pirate radio or provide any services to the ships, thereby starving them of cash and supplies and turning D.J.s into outlaws. Radio Caroline’s two ships — the ferry had been joined by a 1920s-era cargo schooner named Mi Amigo — were towed away by the Dutch authorities because Mr. O’Rahilly owed money to Dutch suppliers, and the ferry was sold for scrap to pay its debts.

Then things got really interesting. Mr. O’Rahilly finagled reacquisition of the Mi Amigo, after which he ran the station as a truly renegade operation — the D.J.s were rarely paid, and they all used fake names — to a backbeat of calamity and financial shenanigans as he outfoxed creditors and the authorities.

The Mi Amigo sank in 1980; the five D.J.s on board, as well as the ship’s canary, Wilson — named after Mr. O’Rahilly’s nemesis, Prime Minister Harold Wilson — were all rescued.

The next ship was a German trawler called the Ross Revenge, launched with great fanfare from Santander, Spain. After it ran aground in 1991 off the coast of Kent, Mr. O’Rahilly had had enough of Radio Caroline. (Miraculously, Mr. Moore said, despite Radio Caroline’s many mishaps, nobody died or even sprained an ankle.)

“Any normal group of people would have realized the situation was hopeless,” Mr. Moore said of Radio Caroline’s exploits during the ’80s, “but these were not normal people.”

Aodogan Ronan O’Rahilly was born on May 21, 1940, in Dublin, one of five children. His mother, Marion Philomena O’Connor O’Rahilly, was an American from a wealthy Irish family. His father, Aodogan O’Rahilly, was a well-to-do businessman who sold building supplies and owned the only private port in Ireland for a time, which became a handy resource once Radio Caroline got underway. His grandfather Michael O’Rahilly, otherwise known as The O’Rahilly, was a Republican hero who was killed by the British during the Easter Rebellion in 1916. It was in his honor that Radio Caroline began broadcasting during Easter week.

Despite a reputation for rarely paying his bills, Mr. O’Rahilly inspired enormous affection. Tony Palmer, who worked on the Ross Revenge in 1990, recalled in a tribute to his old boss, “It became a running joke among Radio Caroline staff that if you heard the ‘Old Man’ start a sentence with ‘Hey, I’ve got this really great idea!’ you knew what followed was going to be challenging, if not impractical, dangerous, or downright contrary to the established laws of physics — nevertheless, it would always be interesting.”

Mr. O’Rahilly’s instincts were not always sound. He was, for a short time, the manager of George Lazenby, the Australian actor who played James Bond in “On Her Majesty’s Secret Service” in 1969. Mr. O’Rahilly advised Mr. Lazenby to turn down the next Bond film, for which he was offered $1 million, because he thought Bond was going out of style, Mr. Lazenby recalled in an interview. “Was it a good or a bad thing? Who can say?” he added. “I ran out of money as a result, but then I went sailing and met the mother of my daughter Melanie.”

In 1993, Mr. O’Rahilly married Catherine Hamilton-Davies, a former house model for Yves St. Laurent, whom he met playing snooker at the Chelsea Arts Club. “With his mane of white hair, and Variety in his pocket,” she recalled by email, “he was a Chelsea personality.”

Mr. O’Rahilly and his wife separated but never divorced. In addition to her and Ms. Rocha Trindade, he is survived by three sisters, Nuala Price, Iseult Broglio and Roisin O’Rahilly, and a stepson, Caspian Rabone.

“He was a rogue without a doubt,” said Tom Anderson, a Radio Caroline D.J. who was on the Mi Amigo when it sank (and who rescued Wilson the canary). “But a rogue with a vision. A charming, lovable man. You always forgave him in the end.”