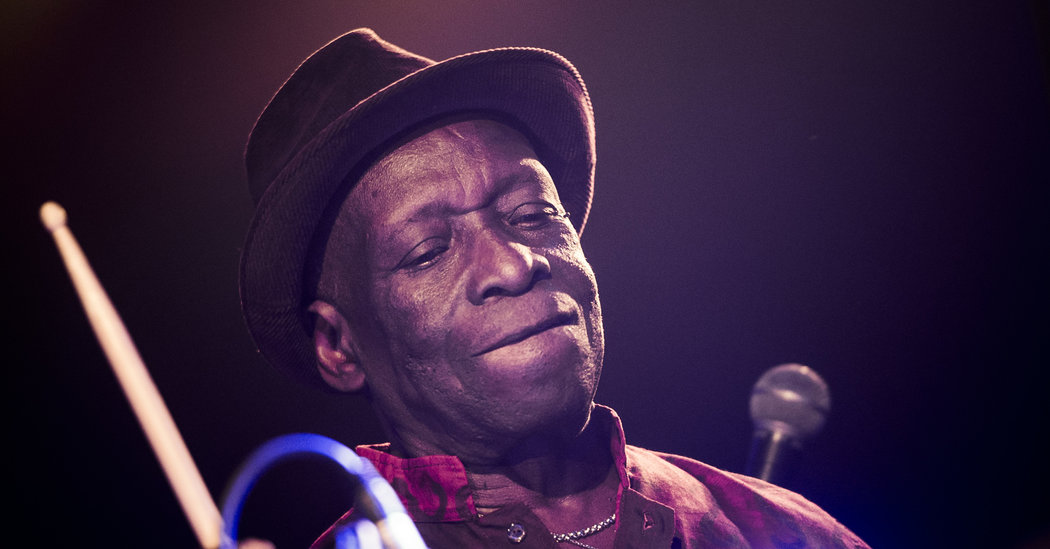 Tony Allen, the drummer who created the steadfast, subtle beat of the Nigerian protest funk known as Afrobeat, died on Thursday in Paris. He was 79.

His manager, Eric Trosset, said the cause was an abdominal aortic aneurysm.

From 1964 to 1978, Mr. Allen worked with the bandleader Fela Ransome-Kuti, who became known worldwide simply as Fela. He was the musical director for Fela’s band Africa 70, which forged music that was both politically committed and danceable, merging West African styles with American jazz and funk.

Mr. Allen made more than three dozen albums with Fela and the band, including the indelible “Zombie” and “Gentleman,” as well as solo albums on which Mr. Allen led Africa 70. The music of Fela and Africa 70 reached listeners and emulators all over the world. On Twitter, Peter Gabriel wrote, “As a musician & aspiring drummer, it was thrilling to get lost in their new, smart, sexy & political music full of killer grooves.”

The songs that defined Afrobeat, with Mr. Allen’s drumming at their core, move at a deliberate, unhurried tempo, geared for marathon six-hour sets and dancing until dawn. On albums, many of Fela’s 1970s Afrobeat songs stretched the length of an LP side.

While Fela composed the parts for the band’s other instruments, Mr. Allen created his own drum parts. His playing was open-ended and improvisatory rather than bluntly repetitive; complex patterns drove a shifting dialogue with every element of the band. “You listen to it flowing like a river,” Mr. Allen explained in a 2016 interview with The Guardian.

After he left Africa 70 in 1979, Mr. Allen went on to an international solo career, leading his own bands and collaborating with rock, jazz, reggae, R&B and electronic musicians. The composer and producer Brian Eno, a fan since the 1970s, once called Mr. Allen “perhaps the greatest drummer who ever lived.”

Tony Oladipo Allen was born on Aug. 12, 1940, in Lagos, then the capital of Nigeria. He was the eldest of six children of James Alabi Allen, a Nigerian auto mechanic, and Prudencia Anna (Mettle) Allen, whose family was from Ghana.

As a teenager he learned electronics and worked as a radio technician — skills that would come in handy in his early days as a touring musician, when he repaired the band’s amplifiers. He didn’t start playing drums until he was 18.

He had grown up listening to West African music, but he also immersed himself in jazz, studying the drumming of Gene Krupa, Art Blakey, Max Roach, Elvin Jones, Philly Joe Jones, Tony Williams and others. “These guys were telling a story by playing different rhythms, and they were doing it with independent coordination,” he said in the 2013 book “Tony Allen: An Autobiography of the Master Drummer of Afrobeat,” which he wrote with Michael Veal. “That’s the way the drums should be played, man.”

As he taught himself to play, Mr. Allen became particularly interested in the pedal-operated pair of cymbals known as the hi-hat, which he felt other African drummers neglected. The whoosh, rustle and ping of his hi-hats animated Mr. Allen’s drumming with an additional layer of polyrhythm.

“I’m creating different patterns with my four limbs,” Mr. Allen told The Guardian in 2014. “They are all playing something different, which means you need to split your mind into four elements with the one central idea running through.”

Martin Perna, the founder of the Brooklyn-based Afrobeat band Antibalas, which performed with Mr. Allen in the 2000s, said Mr. Allen “was the embodiment of rhythm.” He added, “What’s so magical is with all that variation, he’s somehow more hypnotic than a pattern that doesn’t change.”

Mr. Allen soon found work in Lagos highlife bands and groups that played whatever was popular. In 1964 he auditioned for Fela Ransome-Kuti, who was putting together a jazz band, beginning a 15-year musical alliance that survived chronic disputes over getting paid.

That first band’s pure jazz drew only small audiences, and Fela soon decided to combine jazz with African pop; as Fela Ransome-Kuti and His Koola Lobitos, the band played what it called “highlife jazz.”

The group toured Nigeria and neighboring Ghana. In the late 1960s a Ghanaian promoter, Raymond Aziz, came up with a new name for their musical hybrid: Afrobeat.

During a lengthy stay in Los Angeles in 1969 when the band was on tour in the United States, Fela grew politicized by the Black Power movement. When the band returned to Nigeria, Fela renamed it first Nigeria 70 and then Africa 70. His new songs were more streamlined and merged James Brown-style funk with Mr. Allen’s rolling, crackling rhythms.

“I had developed the drumming concept for Afrobeat from many things that I heard while I was growing up,” Mr. Allen said in his autobiography. “It was a fusion of beats and patterns. There was highlife, there was local Yoruba music like apala and sakara, there was jazz, and there was Western popular music like funk and R&B.”

Fela’s new songs also carried messages, at first couched in proverbs and then increasingly direct, that condemned corruption and taunted Nigeria’s military dictatorship. Although Fela and Africa 70 recorded extensively and performed regularly at his club, the Shrine, Fela was repeatedly arrested and beaten.

Africa 70 persisted, and Mr. Allen stayed on as bandleader until September 1978, when, after years of feeling musically fulfilled but financially exploited, he quit.

Mr. Allen was backed by Africa 70 on his 1979 album, “No Accommodation for Lagos,” but he struggled to start his own band in Nigeria. Eventually, after recording in London, he settled in Paris in 1985.

In 1987 he married Sylvie Nicollet. She survives him, as do their three sons and four children from an earlier relationship in Nigeria, along with grandchildren and great-grandchildren. He lived in Courbevoie, a suburb of Paris.

Mr. Allen was frustrated with the first recordings he made in France, on which trendy-minded producers smothered his drumming with electronics. But in the 1990s he forged the blend of Afrobeat and dub electronics that he wanted on “Black Voices,” which featured guest appearances by singers from Parliament-Funkadelic. He found more compatible collaborators in the next decades.

A longtime fan, Damon Albarn of Blur and Gorillaz, appeared on Mr. Allen’s 2002 album, “Home Cooking,” starting a long affiliation. Mr. Allen joined Mr. Albarn in the band the Good, the Bad and the Queen and in a project with Flea, the Red Hot Chili Peppers’ bassist, called Rocket Juice & the Moon. He also made small-group jazz albums and recorded with the reggae guitarist Ernest Ranglin and the techno producer Jeff Mills. This year he completed “Rejoice,” an album featuring the South African trumpeter Hugh Masekela that was begun at sessions in 2010. On Saturday, Gorillaz released a new song with Mr. Allen and the grime rapper Skepta, “How Far?”

“I still challenge myself every time with my playing,” Mr. Allen wrote in his autobiography. “I still want to play something impossible, something that I never played before. That’s what I’m after.”