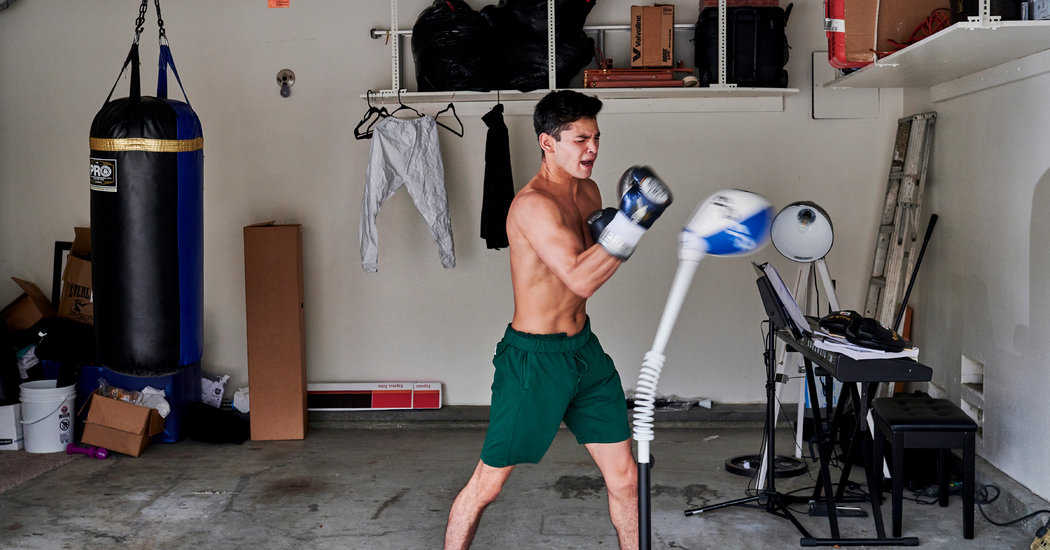 Oscar De La Hoya, the boxing champion turned promoter, spends a part of each day running up and down his half-mile long driveway in Pasadena, Calif., to stay in shape.

In his fighting days, he would run at 9,000 feet above sea level, sometimes wearing combat boots during his favorite part of training. Now, fighters in the next generation are far more limited in how they can train as De La Hoya and other promoters try to somehow give them something to prepare for amid the limits of the Covid-19 pandemic.

Some sports have put events back on the calendar with heavy modifications. NASCAR said Thursday it would run seven races in 11 days in late May, while the track that hosts the Kentucky Derby also planned to return to horse racing with the Derby itself postponed from Saturday until Sept. 5. The Ultimate Fighting Championship, in many ways a rival to boxing in combat sports, planned for at least three cards in Florida starting May 9.

The question of whether or when to bring back boxing underscores a special set of considerations for sports that usually struggle to gain mainstream attention but, because of their small scale, have a rare opportunity for a brighter spotlight — if they can figure out how to come back at a time when larger team sports cannot because they require dozens of athletes and support staff at minimum.

To De La Hoya, who runs Golden Boy Promotions, a comeback for boxing looks like this: a 10-fight card on the weekend of July 4 in any state that will allow it.

There most likely won’t be any fans. No matter, De La Hoya said in a recent interview. There will be competition, two elite athletes trying to win something. He has told his stable of about 90 fighters to stay ready. They have listened. Now all he needs is to work out the logistics.

“People want to be entertained, they want to be distracted,” De La Hoya said. “Boxing has always been a sport that can take you away, whether it’s for a moment, or for an hour or so.”

The obstacles confronting De La Hoya, or any sports executive trying to usher revive a sport, are numerous. A vaccine won’t likely be widely available until at least next year. Fast, accessible testing that people can use often is also necessary. Health officials say high contact sports like boxing pose a higher risk for transmitting the coronavirus than games like golf, archery or tennis.

The Association of Ringside Physicians, which represents the doctors who provide medical services during matches, remains supportive of an indefinite suspension of all combat sports.

“This includes any and all events, regardless of the number of people involved,” the association said in a statement. “Any combat sport taking place during this global pandemic places the athletes, officials, and anyone else involved in the event under unnecessary risk of infection and transmission of Covid-19.”

DAZN, (pronounced “Da-Zone”) the media company that televises Golden Boy’s fights, remains cautious and focused on the return of the major team sports it has partnered with, including soccer leagues outside the United States. It has yet to throw its support behind a specific Golden Boy plan for a major return for boxing.

“Health and safety remain our No. 1 priority,” said Chris Legentil, a spokesman for DAZN. “We’re looking at a variety of scenarios for how the global boxing calendar could come together when sports resume.”

The United States Olympic and Paralympic Committee on Tuesday issued guidelines for returning to training that stated sports with direct or indirect contact, like wrestling, boxing, and basketball, should only resume after public health authorities lift limits on the size of groups that can gather and allow public training facilities to reopen.

De La Hoya and other boxing executives estimate they can hold an event with roughly 50 people, including the boxers, their corners, a referee, judges, television production staff and other support staff.

Without the ability to sell tickets, purses will likely have to be smaller, but most boxers are not on salary and usually don’t make much money if they don’t fight.

“I think most of the athletes want to fight and don’t want to just sit around,” said Todd duBoef, president of Top Rank, another leading boxing promoter looking to hold fights as soon as June. “And I think the smart ones will realize this is an opportunity because there are no sports right now. In my business, attention is currency.”

Ardi Dwornik, a spokeswoman for ESPN, said the network has been in constant contact with Top Rank about possible events in the coming months. “We miss sports, too, and we are looking forward to sports’ return and boxing’s return,” Dwornik said.

Count Ryan Garcia, who has more than six million followers on Instagram, among the boxers itching for competition and exposure. The undefeated (20-0), 21-year-old lightweight has moved from his apartment, in downtown San Diego, to his parents’ home in La Jolla, Calif., a nearby suburb, where he has installed a heavy bag and reflex bag in the garage. There is a treadmill, where he runs as many as five miles a day, and a large living and dining room area, where the furniture is cleared out so he can hit the mitts with his father, practicing his moves and technique as if he were in a ring.

“Of course I want to fight,” said Garcia, who last fought in February and likes to fight at least every three months. “If people wanted to fight me in the garage, then bring them on, and I will fight them in the garage.”

Tristan Kalkreuth, who, like Garcia, is a Golden Boy fighter, turned professional last year, at 17, and was planning to fight six times this year. Now the light heavyweight is trying to stay fit jumping rope, running suicides on his block near Dallas, and holding planks. He is only able to train in a gym once a week and can feel the rust spreading.

“For me it’s about getting my touch back,” Kalkreuth said. “If I can just get one week of sparring in, the next week I will be sharp.”

De La Hoya and others said fighters need three to five weeks to get ready to fight, so first they need gyms everywhere to open, and then the clock can start ticking toward a fight night.

Melissa Nolan, an assistant professor in the Department of Epidemiology and Biostatistics at the University of South Carolina, said for any sport to go forward, access to the kind of testing that provides fast results, even within 10-15 minutes, has to improve. “May is going to be a very telling month,” Nolan said. “If we don’t have those tests by the end of May we are really going to struggle.”

De La Hoya said he has held discussions with officials in numerous states, including Texas, California and Arizona, about a possible venue. DuBoef envisions setting up in a fixed location — maybe Las Vegas — and perhaps having fighters come there to train for several weeks before their fights so their contact with the outside world can be controlled.

“These things aren’t formulated yet, but it is getting close,” he said.

For more than a month, trying to work through these kinds of logistics seemed pointless to De La Hoya. Now that has changed, even as the pandemic has worn on.

“We can see a light,” De La Hoya said from his home in California. “Our governor is going to make some crucial decisions, May 15. We will know then what we can do, but we are going to start revving our engines.”