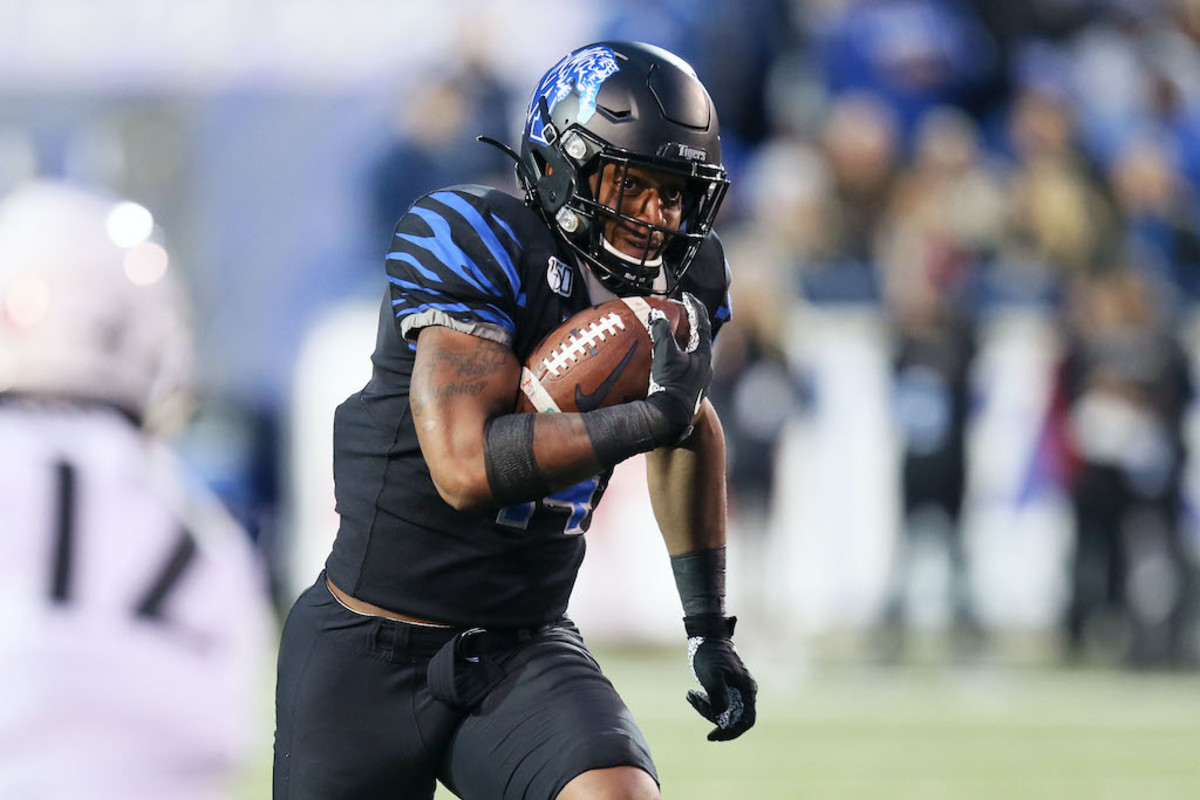 Washington took one of the most intriguing players in the 2020 NFL Draft in running back Antonio Gibson out of Memphis. We are calling him a running back for now, however, we aren’t completely sure he should even be put into that box. So figuring out how he fits on the team from both a football and fantasy perspective is complicated. It doesn’t help that Washington already has a duo of potentially very good young running backs in Derrius Guice and Bryce Love who have serious injury concerns to go along with their immense talent, as well as veteran Adrian Peterson who surprisingly has had a career resurgence in Washington. Beyond that, the team has also added veteran Peyton Barber and pass-catching specialist J.D. McKissic.

So how does Gibson fit in and is this even the position we should be worried about?

Gibson may be the highest risk, highest reward player in the 2020 draft class. He’s a 228-pound former sprinter who is six-foot tall and ran a sub 4.4 40-yard dash. His playmaking ability and versatility is undeniable. Not only does he play running back, he has impressive receiving skills and can return kicks and punts. On just 77 touches, he scored 14 touchdowns and seven of them went for more than 40 yards. Nonetheless, that’s just the issue. He only has 34 career carries and they were all stretches and sweeps. We really don’t know what his ceiling is or what he’s actually capable of if he gets touches like an actual NFL running back.

In Gibson’s final season at Memphis in 2019, he carried the football 33 times for 369 yards and four touchdowns. Gibson also caught 38 passes for 735 yards and eight more scores. He averaged over 19 yards per catch.

At the Combine, Gibson measured in at 6-feet-0, 228 pounds, and ran a blazing 4.39 40-yard dash. Gibson’s build is of a running back, while his speed is similar to some of the top deep threats in the entire NFL.

Gibson is a player who can contribute immediately for the Redskins next season. Sure, he’s not a great route runner, but in today’s NFL, you don’t have to run precise routes to be a dangerous weapon on the field.

The assumption is Peterson and Guice will run a split back system this year in Washington with a pass-catcher working in behind them. Gibson would ideally be that guy. Opportunity could arise as Peterson is 35 years old with plenty of miles on his beat-up body and Guice has already seen injuries pile up.

What many are forgetting is that Love is also in the mix and could have been the first running back taken in the 2019 NFL Draft if not for a knee injury that cost him the end of his college season and his rookie year. It’s not unthinkable he could end up the lead back even if everyone is healthy or barely see the field at all.

Trying to pin down Gibson’s role in 2020 is nearly impossible, but if he is going to give you value it will most likely come as a PPR-reliant running back who is used more on gadget plays and worked in sparingly on the ground. However, dynasty owners should not be afraid to reach for him. He has the talent that he shouldn’t be a full-blown bust on the next level even if he never becomes a true running back who sees double-digit carries per game. There is too much playmaking ability to just not use him.

His upside is Jamaal Charles with the Chiefs who, as I unfortunately know too well, single handedly won many fantasy owners championships while dismantling the Raiders in December of 2013 after a monster season. If you can steal that kind of player in your dynasty draft, you have to take that risk. For redrafts, he’s a late-round flier at best. The fact that we may not see him at all if there is no preseason should be used as an advantage for savvy dynasty owners looking to grab a home run hitter. It should also probably scare most redraft owners off because we have no idea what’s going on in that backfield or if the backfield is even where he’ll be lining up.