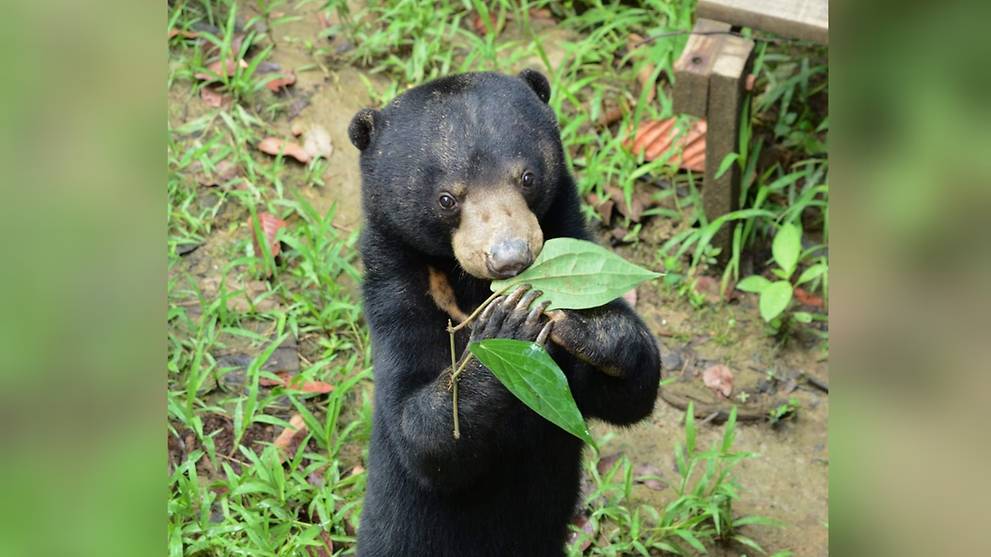 KUALA LUMPUR: On a normal day, the Bornean Sun Bear Conservation Centre in Sandakan, Sabah, would have tourists and schoolchildren coming in droves to see rescued Bornean sun bears, the smallest species of bears, and hiking through part of the Kabili-Sepilok forest complex on elevated walkways.

Since Malaysia’s government imposed a nationwide movement control order (MCO) in an attempt to contain the spread of COVID-19, the centre has fallen quiet. The only activities there now are of the bears roaming the forest enclosure, and the keepers going about feeding their charges and maintaining the centre.

With only essential travel allowed, the country’s tourism has ground to a halt for over six weeks. This has greatly impacted eco-tourism sites like the Bornean sun bear centre, which is also a wildlife conservation and rehabilitation centre for rescued sun bears.

“We depend on tourism revenue for our operations. In 2019, we counted 84,496 visitors through our gates,” its founder and chief executive officer Wong Siew Te told CNA.

The centre has 43 rescued bears and 30 staff members, who are divided into teams in-charge of taking care of the bears, education outreach and tourism. Since its founding in 2008, the centre has released seven rehabilitated bears back into Sabah’s forests.

The Gibbon Conservation Society in Raub, Pahang, is also facing the same predicament. With an aim of rehabilitating the gibbons and releasing them back into the wild, the organisation had always depended on contributions and donations to fund its expenses.

READ: Gibbons’ hope – The city girl who gave up all to save victims of pet trade

It used to take in volunteers, usually university students studying zoology, to help with preparing the gibbons’ feed, running data collection and helping with the gibbons’ learning enrichment.

Not anymore. Project leader Mariani Ramli said she had stopped taking student volunteers just prior to the MCO, which restricts both domestic and international travel.

“As it is, one of our four employees is stuck in Kedah, and can’t return to the centre to help. We managed to get a local volunteer to help with the centre’s daily operations,” she said.

With the MCO disrupting the traditional means of funding for these private wildlife conservation efforts, they are now compelled to re-orientate and source new means of revenue to ensure the animals’ eventual return to the wild is not affected.

Bornean Sun Bear Conservation Centre is cutting costs wherever it can, but there are fixed costs even though it is temporarily shut.

“It takes about RM120,000 a month to run the centre and to pay for the bears’ food and medicines, as well as staff salaries,” Wong said.

The centre relies on a local supplier, who sources vegetables from local farmers in another town. Wong said he would not consider switching to other suppliers who might be able to offer a cheaper price for now.

“Sometimes you have to look at the bigger picture. If I were to start looking for an alternative now, that would mean difficulties and problems up the supply chain. The supplier and farmers  in turn would face problems too,” he said.

But the past nine years educating and working with the local community about conserving the river terrapin along the Kemaman river has borne fruit, she said. Previously, terrapin eggs were part of the locals’ diet, a threat to the population of the riverine turtle known as tuntung in Malay.

“Now they are the ones on hand to help with ensuring that the 700 terrapins hatched at the conservation centre’s incubator are cleaned and fed daily, until they are old enough to be released back into the rivers,” Dr Chen said.

READ: Isolated and short of supplies, Malaysia’s indigenous groups depend on aid to ride out movement control order

Besides conservation, the Turtle Conversation Society also carries out education outreach programmes for both government students and home-schoolers to highlight the local fauna and ecosystem.

The centre derived about one-fifth of its operating budget from small eco-tourism activities, where tourists and visitors could visit the centre and enjoy firefly watching along the Cherating River. The rest came from donations, contributions and merchandising.

All that is gone now, hit by both the COVID-19 pandemic and the resulting MCO.

Dr Chen explained that she could not be at the hatchery, as her home was more than 10km from the conservation centre. Instead, work is currently being carried out by a local, Wazel Mahad, 57, who spends about six to seven hours each day to clean the tanks, refill them with fresh water and also feed the turtles.

“This community-based conservation project was at the back of my mind when we started TCS. It was a long and difficult journey for nine years, but I’m glad it happened, because it has paid off with the local participation,” said Dr Chen.

To ensure their continuous operations, the sun bear and river terrapin centres are ramping up promotional efforts for their “adopt an animal” programmes, besides soliciting donations online.

Donors for specific animals will receive certificates, gifts and updates on the recipient animals.

In the case of the Bornean Sun Bear Conservation Centre, those interested could donate money to a “Share A Bear” campaign for RM300 (US$69) a year, or opt for the more personalised “My Bear” adoption for RM600 a month or RM7,200 a year.

“I am also writing everywhere to apply for grants. The only issue is that grants are tricky, there are not many organisations which provide that sort of funding and they are usually for a specific project and time frame,” said Wong.

He and his non-bearkeeping staff have turned to social media to drum up financial support.

“I’m actually busier than before the pandemic,” he said, adding that he was scheduled to give a webinar for a US audience at 3am local time the next day.

Similarly, the Turtle Conservation Society is also running an “Adopt A Terrapin” campaign, with the adoption fee helping to defray the costs of searching for and incubating the eggs for hatching and release later.

Bulk of the adoption fee will go to microchipping the turtles, Dr Chen explained. This provides another avenue of scientific research come nesting time and if the locals happened upon a turtle carcass.

Dr Chen is also working with the local women’s community to produce and market local handicrafts such as terrapin-motif batik, batu seremban (five stones game) painted with turtles, tote bags and others.

“This doesn’t just raise funds for the project, but also provides them with a way to earn a living during the MCO. Many of the men here earn day wages and are itinerant workers. With the MCO, there’s no work coming in, so it’s a way to help the community as well,” she said.

With everyone working from home, Dr Chen has had to re-orientate herself from doing fieldwork for the moment to learning new skills and settling down to tackle paperwork concerning TCS.

“I will miss out on taking the turtles’ measurements and all this year, but it’s alright, we’ve already built up a large database from the previous years’ sampling. Luckily this MCO wasn’t imposed during nesting season (usually mid-January to mid-March)” she said.

Meanwhile, Gibbon Conservation Society’s Mariani and her team have not run any adoption campaigns, but instead are highlighting the individual gibbons on social media while soliciting for donations in the same post.

“We’ve cut down and are stretching everything as much as we can,” she said.

Previously, the team had a permit letter to travel to the Selayang wholesale market to buy supplies for the gibbons. The market has a lot of variety and prices are cheaper.

Her colleague would drive 90 minutes from Raub to the Klang Valley, decked out in their personal protective equipment (PPE), purchase the fruits and vegetables needed and drive back to Raub again.

As an additional measure, Mariani and her staff also turned to home gardening, and occasionally foraging from the surrounding jungle to supplement their food supply. With the Selayang area now under an enhanced MCO, the centre is also sourcing from local farms.

THINGS WILL NEVER BE THE SAME: CONSERVATIONISTS

While the nationwide MCO has been extended to mid-May, majority of businesses have been allowed to reopen from May 4 onwards under a “conditional MCO”.

However, even if the MCO is lifted one day, things would never be the same, all three conservationists noted.

Dr Chen does not foresee resuming the turtle centre’s eco-tourism activities for a long while. A terrapin gallery that Dr Chen and her colleagues set up at Kampung Pasir Gajah in Kemaman will remain closed. Usually, it is visited by people coming from near and far.

“Life for the centre post-MCO would still be a very cautious one, and we will focus more on education,” she said. Incubation and release would still go on, but she would start exploring alternative channels for her outreach programmes, such as webinars.

The Gibbon Conservation Society’s set-up has also taken on a regimented outlook, with only one staff member designated for supply runs. She undergoes disinfection after every outing.

“Actually, pre-MCO I was already strict about noise levels and human interaction with the gibbons, including who’s to feed the babies and sanitary procedures, to prevent any human-animal disease transmission. Now we’ve just tightened it to make doubly sure,” Mariani said.

The centre will still continue its pared-down operations and continue stretching every ringgit. “Because who knows how long it will be before we can get funds again,” she said.

For Wong, tourists numbers back to Sepilok and his Bornean sun bear centre are unlikely to achieve their former numbers for the foreseeable future.

“We’ll probably not have tourists coming back until the world economy improves, and it’s safe to fly again. But everything’s for the bears. If it means having to work harder and stay up later, it’s fine,” he said.

He also appealed for government help, noting that the his centre was assisting in preserving the country’s wildlife heritage, as the bears legally still fell under the Sabah Wildlife Department’s jurisdiction. At the same time, the centre has long been a favourite destination for tourists in Sandakan.

The drop in funds also has the centre rethinking its previous methods of releasing bears into the wild, where a helicopter was chartered to fly the bear in a transport cage into the middle of Tabin Wildlife Reserve, a 1,225 sq km forest near Lahad Datu.

“We released in the middle of Tabin because it was large and very remote from any human settlement. We will need to think about releasing them in other forests closer to Sepilok, and different modes of transport,” Wong said.

More worrying for Wong though was the possibility of the sun bears being poached for their bile, especially after bear bile was promoted as a coronavirus treatment by the Chinese government.

“People who are desperate for a cure might hunt bears for their gall bladders, further contributing to the decline of the wild sun bear population,” he said.