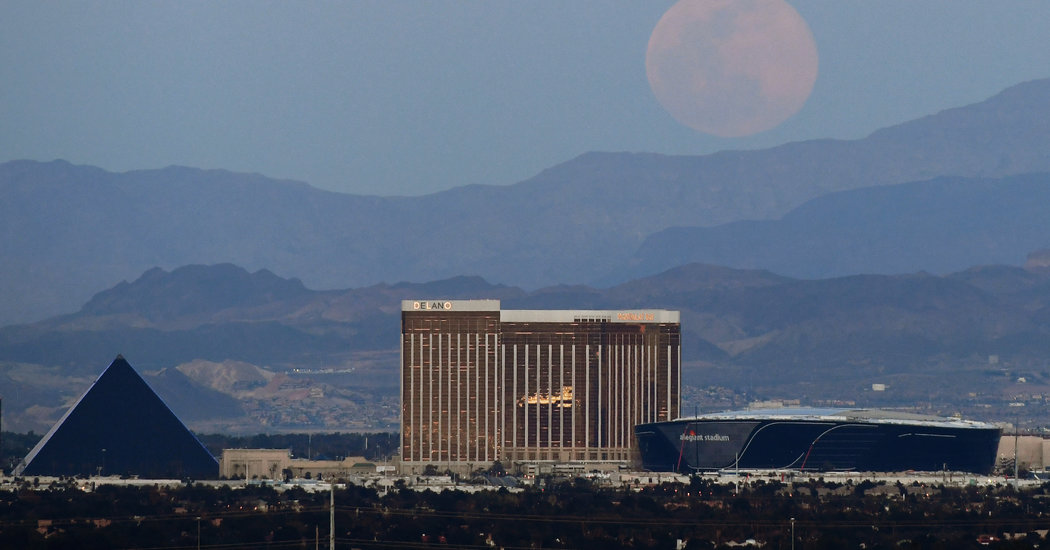 Could they help solve each other’s problems?

MGM Resorts International, the company that has ownership stakes in more than a dozen hotel-casinos in Las Vegas, has pitched several sports leagues, including the N.B.A., W.N.B.A., N.H.L. and M.L.S., on an audacious proposal to house their athletes and necessary support staff to hold their seasons on a quarantined block on the Las Vegas Strip, according to multiple people familiar with the discussions who spoke on condition of anonymity because they were not authorized to comment publicly.

According to a proposal deck sent to the N.B.A. and the W.N.B.A., which The New York Times reviewed, MGM envisions a fully quarantined campus, essentially one full block of the Las Vegas Strip, where players would live and play out whatever schedule the leagues want. The athletes would be joined by their families, league and broadcast media employees, as well as the staff and vendors needed to serve them, with access to lounges, spas, restaurants and all the other perks the resorts offer (yes, even gambling).

Sports leagues have explored any number of options for restarting their seasons, and various news media reports have floated cities like Las Vegas, Orlando, Fla., and Atlantic City, N.J., and even the states of Hawaii and Arizona as possible locations for games in a semi- or fully-quarantined environment. But most league executives have been publicly noncommittal about their plans.

Scott Ghertner, a spokesman for MGM Resorts, declined to comment. On an earnings call Thursday, Bill Hornbuckle, the acting chief executive of MGM Resorts, said the company is in contact with sports leagues. “We have been in an ongoing dialogue with leagues and other sporting activities around televised-only events — I think boxing, M.M.A., N.B.A., N.H.L., etc. — and we can host some of that,” he said.

Hornbuckle also said MGM’s earnings for the first three months of the year were down 29 percent from last year, a revelation that caused its stock price to tumble 11 percent in trading Friday.

The centerpiece of the proposal to the N.B.A. is the Mandalay Bay resort, which has 4,700 rooms at three connected hotels at the southern end of the Las Vegas Strip: the Mandalay Bay, the Four Seasons and the Delano. They are also connected by an enclosed walkway to the Luxor hotel, which is where MGM service staff such as housekeepers and caterers would live.

As many as 24 basketball courts could be built at the convention center at Mandalay Bay, which hosts the Aces of the W.N.B.A. Five would be used to telecast games, while the others would be for practice. MGM also proposed getting access to the Thomas & Mack Center, an arena on the campus of the University of Nevada, Las Vegas, that hosts the N.B.A.’s annual summer league.

The full health and safety procedures necessary are not fully laid out, though they would clearly be quite extensive. “Any person entering the integrated resort would have to go through agreed health, safety and quarantine protocols” according to the proposal, and they would be “required to remain in the integrated resort for the entirety of their stay.” MGM hired a health and safety consultant as an adviser and said it would secure all necessary medical testing equipment.

Representatives of the N.B.A., N.H.L. and M.L.S., declined to comment on the proposals. While some sports organizations, like the Ultimate Fighting Championship and NASCAR, have plans to return to competition at a reduced scale in May, it does not appear that any top U.S. leagues for team sports are close to announcing a comprehensive plan to return.

Many states remain under stay-at-home orders, and even those that have announced plans to lift them are keeping social distancing measures in place. Leagues also need to obtain thousands or tens of thousands of coronavirus tests, which are in short supply, and risk backlash if they are using tests while sick people and health care workers still struggle to obtain them.

“I hope when we get to that point, when we’re going to try and get the sports figures tested, then we will have enough tests so that anybody who needs a test can get a test,” said Dr. Anthony S. Fauci, the leading public health expert on President Trump’s coronavirus task force.

Business in Las Vegas has ground to a halt since mid-March, when the Nevada government ordered casinos and all other nonessential business shuttered. The city’s economy is based upon leisure and hospitality more than any other big city in the country. Those industries have been decimated by stay-at-home orders, flight cancellations, and the shutdowns of conventions, meetings, and high-profile events like U.F.C. fights and the World Series of Poker. One month after Las Vegas missed out on a windfall of tourists betting on the N.C.A.A. basketball tournaments, MGM’s Bellagio casino lost its chance to host the N.F.L. draft, which was held remotely.

The current jobless rate in Las Vegas is estimated to be 25 percent — far higher than it was during the Great Recession, and emergency services are stretched thin. Governor Steve Sisolak of Nevada extended the state’s stay-at-home order through mid-May but has begun loosening restrictions on outdoor activities and some small businesses. Still, it does not seem like casinos and entertainment venues will be open to their full capacity anytime soon.

Carolyn Goodman, the mayor of Las Vegas, has repeatedly criticized Sisolak for being cautious, and she has called for casinos and other nonessential businesses to open.

“We are unique and we depend on crowds, and now we’ve become a mecca for major-league sports,” Ms. Goodman said in an interview. “You can’t enjoy those things, and life isn’t worthwhile if you limit what people can do.” Notably, however, the Las Vegas Strip isn’t actually in the city of Las Vegas, but in unincorporated towns governed by Clark County.

In getting any plan for a quarantined sports campus approved by local and state officials, however, the MGM has a leg up. James Murren, who was MGM’s chief executive for 12 years, left that position in March and was appointed by Sisolak to chair the state’s Covid-19 Response, Relief & Recovery Task Force, a group of businesses supporting the state’s efforts to combat the coronavirus.

If quarantined games are held in Las Vegas, it would further the city’s budding reputation as one of the country’s sports hot spots. Some of the biggest boxing and mixed martial arts fights have long been held in casinos, but for decades the leaders of major team sports avoided the city, concerned about a supposed corrupting nature of legalized sports betting and the city’s party culture.

Things have since flipped. The N.H.L. awarded Las Vegas an expansion franchise, the Golden Knights, which began play in 2017 and promptly made it to the Stanley Cup Finals. The N.F.L. allowed the Raiders to relocate to Las Vegas, where they are supposed to begin play in a brand-new stadium this fall. The federal prohibition that essentially banned sports betting in all states besides Nevada was struck down in 2018, and betting is now legal in more than a dozen states.