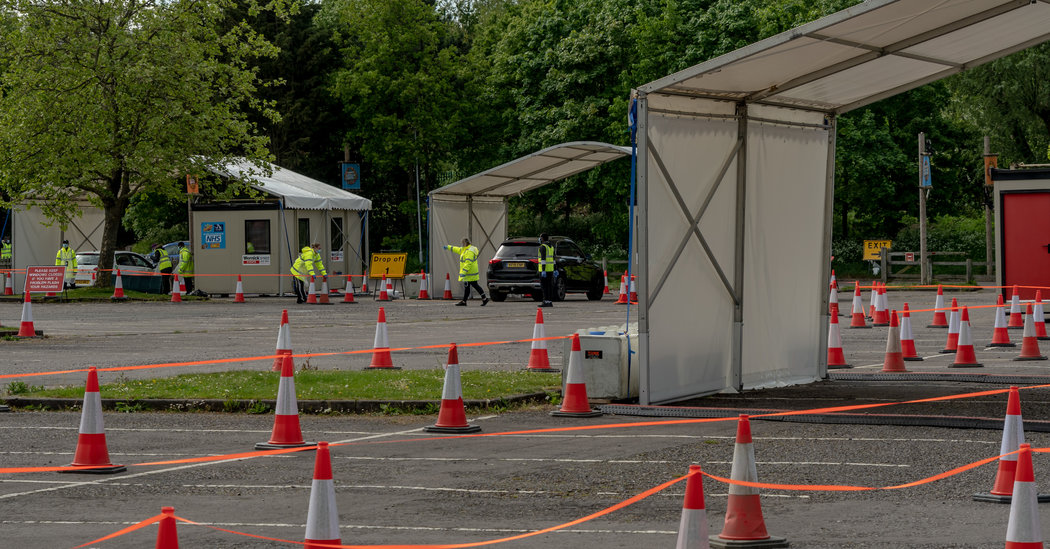 LONDON — For Britons looking to judge their government’s desperate response to the coronavirus pandemic, the verdict has increasingly come down to two numbers: 100,000, the number of tests that officials promised to conduct every day by the end of April; and 27,510, the latest death toll.

On Friday, there was good news and bad news in the numbers: The government announced it had exceeded its testing target, carrying out 122,347 tests on the last day of the month. But with 739 more people dying from the virus that same day, Britain was also poised to soon overtake Italy in a few days as the hardest hit country in Europe.

The fixation on numbers is understandable but misplaced, experts said. Just because Britain can carry out more than 100,000 tests a day does not mean it has built an effective testing and contact tracing program, which experts say is needed to avert another spike in infections if the government eases the lockdown.

And while there would be grim symbolism for Britain in passing Italy in the total deaths, drawing direct comparisons between any two countries is extremely difficult, given differences in population, demographics, population density, and how the authorities collect the statistics.

Still, Britain’s health secretary, Matt Hancock, trumpeted the achievement of 122,000 tests, a 10-fold increase from when he set the goal on April 2, a day after having emerged from isolation himself with symptoms of the virus.

He said the achievement had set the stage for an equally ambitious program of contact tracing — identifying people who have come into contact with an infected person so they can be also isolated, helping curtail the spread of the disease. Mr. Hancock said this program would eventually allow Britain to lift its lockdown and return to a semblance of normalcy.

“I knew it was an audacious goal, but we needed an audacious goal,” said a visibly relieved Mr. Hancock, for whom the target had become a personal crucible. “The challenge we still face is vast, but we are making real progress.”

There were some lingering questions over whether the government changed its policy for counting tests to make its target. While officials insisted they had not changed the rules, they acknowledged having counted more than 27,000 home test kits, and more than 12,000 tests sent to satellite testing centers, at the time they were mailed rather than when they were returned to labs, with results.

Regardless how many tests Britain has conducted, medical experts said the government had yet to build a contact-tracing operation to match its testing capacity. Drawing so much attention to the 100,000 number, critics said, was mostly a public-relations stunt.

“The number of people tested is meaningless,” said Dr. Bharat Pankhania, an expert in infectious diseases at the University of Exeter Medical School. “If you fail to deliver on contact tracing, then you are testing as a ceremony rather than as a way to contain and isolate the outbreak.”

Other experts, however, said there was merit to setting a numerical goal for testing, given Britain’s slow start. In March, officials decided to abandon testing and tracing in the general population in favor of testing only those people with symptoms serious enough to hospitalize them.

“When there is a political priority to do something, then it can happen,” said Professor Devi Sridhar, director of the global health governance program at the University of Edinburgh. “Now we need the same effort and priority given to tracing and isolation, as it goes in a package: test, trace, isolate.”

To some extent, the government is a victim of its penchant for using numbers to reassure the public it has a coherent plan. On March 19, in one of Prime Minister Boris Johnson’s early public statements on the crisis, he said that he believed the British people could send the virus “packing” within 12 weeks.

Alongside the plan to ramp up testing, the government plans by mid-May to recruit around 18,000 people — including around 3,000 in the field — to conduct contact tracing. That is supposed to operate with a cellphone app that is being tested next week in one place, the Isle of Wight.

But so far, Downing Street has been unable to say how many of the 18,000 new employees have been recruited.

Mr. Johnson once set an objective of 250,000 tests a day, though the government now says that was conceived at a time when the search was on for an inexpensive and user-friendly antibody test, which would detect whether a person had been infected in the past. In fact, when it was announced, Mr. Hancock’s 100,000 target also included the possibility of counting antibody tests.

“Targets work when you have confidence that hitting them helps you in meeting your goal,” said Stewart Wood, an adviser to former Prime Minister Gordon Brown. “The problem with this type of targeting is it suggests a level of competence which is not backed up by the strategy.”

From the start, the government has publicly plotted the country’s death toll relative to its neighbors, a comparison that initially looked favorable for Britain. But that data came under scrutiny, since it was based on deaths in hospitals only, while France’s, for example, included fatalities in nursing homes, too.

When non-hospital deaths were recently added into the equation, Britain suddenly appeared headed for among the worst fatality numbers in Europe. That prompted the government to add yet another new chart — based on per capita death rates — which puts it behind Belgium, Spain and Italy.

As of Friday, Italy’s deaths totaled 28,236 — a number that excludes deaths in nursing homes. Its daily fatality rate has mostly declined over the last week, and was at 269 on Friday.

“You can see the shift in government messaging emerge, and the new line is the importance of data comparability,” said Sophia Gaston, director of the British Foreign Policy Group and a fellow at the London School of Economics.

“There is some truth in that,” she said, “but at the same time it is dealing with the realization that Britain is likely to come out of this with a rather ghastly report card.”

The government, Mr. Wood said, would have been better served by explaining the uncertainty over statistics from the start and by being more explicit about the lack of up-to-date figures on nursing home fatalities.

“The public would have understood that lack of certainty,” he said. “Instead, they have stuck with measures which everyone gradually has got to know are not quite right, and then had to shift, almost as a concession.”