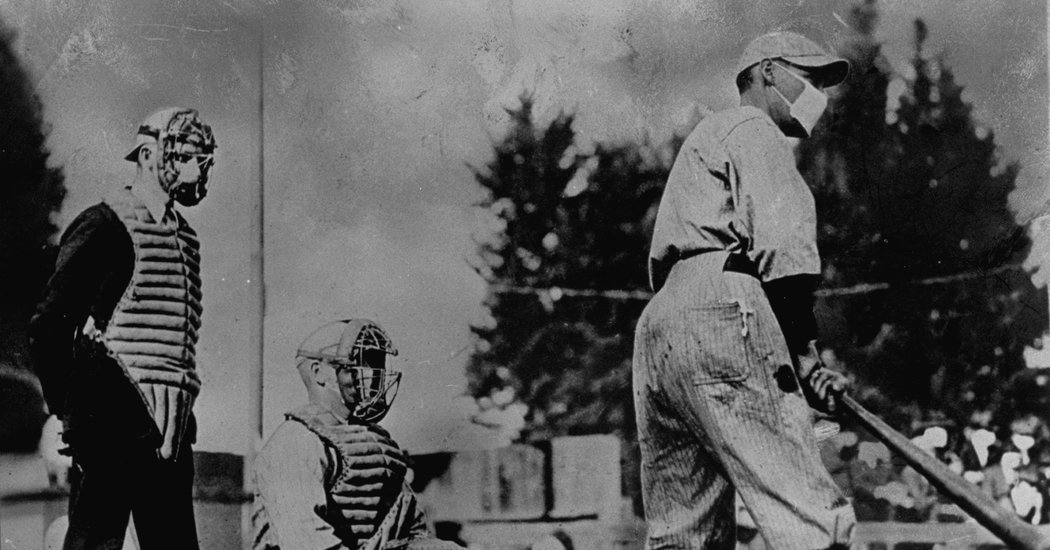 A friend and fellow baseball fan recently sent me a photograph to lift my spirits. Gleaned from the archives of the National Baseball Hall of Fame, the image showed an exhibition game played in Pasadena, Calif., in Jan. 1919. The scene shows the batter, catcher and umpire all wearing surgical masks, as are those watching from the grandstand. The image was captured just a few months before the third and final wave of the devastating influenza pandemic that emerged in 1918.

One hundred years later, we are all wearing masks again — but without the game.

It is a cruel twist of biology that the social distancing required in response to the Covid-19 epidemic has also necessarily robbed us of baseball, something that might help to heal our souls. But wait we must — for a sport that has previously proved nearly impervious to both war and pestilence.

During the pandemic of 1918, the World Series was held after a regular season abbreviated not because of influenza, but because of the Great War in Europe. Though ill-advised from a medical perspective, the Red Sox and Cubs were given dispensation until Sept. 15 to play the World Series, whereupon the war department’s “work or fight” order would be enforced, requiring the ballplayers to do one or the other in service to the nation. The Red Sox defeated the Cubs four games to two, bolstered by the pitching performance of a young lefthander named Babe Ruth.

Baseball continued to play uninterrupted during World War II following President Franklin Delano Roosevelt’s “Green Light” letter written in early 1942 to Kenesaw Mountain Landis, the first Commissioner of Baseball. While F.D.R. noted that the decision about the baseball season was up to the Commissioner and baseball club owners, he recommended that the games proceed.

“I honestly feel that it would be best for the country to keep baseball going,” he wrote. Fans “ought to have a chance for recreation and for taking their minds off their work even more than before.”

The war years saw the games played with rosters largely made up of players either too young or too old to fight. But play they did, providing both welcome diversion on the home front and boosting morale for servicemen overseas, who followed the results in tabloids.

Perhaps there is no greater example of the healing power of baseball than following the attacks of Sept. 11, 2001. The first game played in New York was only 10 days after the tragedy, pitting the visiting Atlanta Braves against the hometown Mets. By all accounts it was a somber occasion, as players and fans alike were brought to tears after the singing of the national anthem and the 21-gun salute to the fallen.

The melancholy lingered into the eighth inning until Mets’ catcher Mike Piazza slugged a dramatic go-ahead home run, causing the fans to erupt in joyous celebration. It was as if a single swing had lifted a collective weight, giving permission for New Yorkers, and perhaps the nation, to cheer again.

Spectator sports have therapeutic benefit in times of both national and personal crisis. For a few precious hours we are distracted, engaged in virtual competition, as the athletes we either watch in person or view onscreen become our avatars. We celebrate their victories and mourn their losses as if they were our own.

As children we imitated a favorite batting stance, pitching motion or even hairstyle, somehow believing this would miraculously transfuse our heroes’ skill into our circulation. We don their jerseys, adorned not with our own names on the back, but that of some famous stranger, sometimes long departed.

That is the special relationship we have with baseball and indeed all sports.

As the world now takes on the challenge of Covid-19, those on the medical front lines too have been hailed as heroes. Perhaps one day soon there will be a Dr. Anthony Fauci jersey, but for now that honor remains within the purview of sport.

Baseball may be medicine for the masses, but for each fan it provides a personal prescription that may be “used as needed.” There is a line in the movie City Slickers in which one character says, “When I was about 18 and my dad and I couldn’t communicate about anything at all, we could still talk about baseball.”

I have found the same is true when speaking with patients. I consider politics and the financial markets off-limits, but the topic of baseball is nearly always welcome, especially in the most difficult moments.

Some years ago I visited a friend in the hospital, a fine internist who was in his final days of battling cancer. In better times we discussed patient care, but at the end we most often talked about baseball. We both longed to see our respective beloved teams meet in a New York-Cleveland World Series, his “Amazins” versus my “Tribe.”

It was not to be.

At our last visit together he said goodbye as only a true fan would, speaking through his pain as I left his hospital room.

“I hope your Indians win it all next year.”