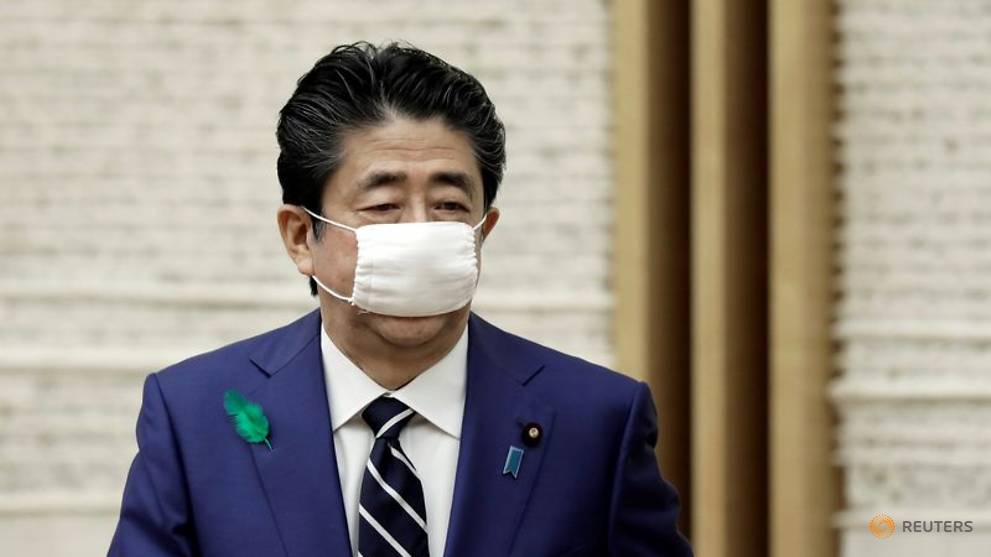 TOKYO: Japanese Prime Minister Shinzo Abe said on Thursday (Apr 30) that the government would consult experts to decide whether to extend the state of emergency beyond May 6.

Abe, speaking in parliament, also said the situation surrounding the coronavirus epidemic continued to be “severe”.

With the current emergency declaration set to conclude at the end of the Golden Week national holidays, there remain worrying signs that Japan’s low testing regime has undercounted many coronavirus cases.

Slumps in factory output and retail sales illustrated the economic blow from the virus.

“We would like to consult experts’ analysts and views,” Abe said in parliament, adding he wanted to make a decision before the last minute.

Tokyo confirmed 47 new infections on Wednesday. Nationwide there have been 13,929 cases and 415 deaths, according to the health ministry, still far lower figures seen in the United States and Europe.

A study using antibody tests among people in the Shinjuku ward of Tokyo indicated close to 6 per cent of people had been exposed to the virus, the Tokyo Shimbun newspaper reported, echoing a similar study of patients at Keio University Hospital.

Japan has performed 1.3 coronavirus tests per 1,000 people, compared with 12 in South Korea and 18 in the United States, according to figures compiled by Our World in Data.

Japan’s parliament is set to approve a US$241 billion supplementary budget on Thursday to fund a stimulus package featuring cash payouts and loans to cash-strapped firms to cushion the economic blow from the pandemic.

The package features cash payouts of 100,000 yen (US$938) per citizen, a move Abe said would offer broad aid to households which saw income fall sharply due to job losses or declines in work hours.

In addition to the cash payouts to households and small firms, the stimulus package includes the cost of beefing up medical systems to cope with the new virus and 1 trillion yen in extra subsidies for local governments.

But the deepening pain from the pandemic, which has forced residents to stay home and businesses to shut down, is already drawing calls from politicians for even bigger spending.

Despite costing the government more than 12 trillion yen, blanket cash payouts would only push up Japan’s economic growth by up to 0.6 percentage points, said chief economist at Dai-ichi Life Research Institute Hideo Kumano.

“The impacts on stimulating consumption will be small because many consumers will still refrain from going out for spending,” he said.

The global economy could this year see the steepest downturn since the Great Depression of the 1930s due to a virus-driven collapse of activity, with Japan’s economy facing stagnation due to its export dependence and soft domestic consumption.

Official data on Thursday showed factory output slipped 3.7 per cent in March from the previous month, a smaller decline than the 5.2 per cent drop in a Reuters forecast.

The reading marked the sharpest fall in production since October last year, and followed a downwardly revised 0.3 per cent drop in the previous month.

Automakers and machinery manufacturers suffered output declines due to slower demand for parts and equipment from factories overseas, especially in China.

Retail sales slumped 4.6 per cent in March from a year earlier, pulled down by tumbling demand for general merchandise and clothing as well as plunging department store sales.

Japan was already struggling with weak demand before the outbreak after the government raised the sales tax to fix its heavy public debt burden, which is more than twice the size of the gross domestic product.

The economy shrank an annualised 7.1 per cent in the three months through December due to the hit from the US-China trade war and the sales tax hike.

With the Bank of Japan pledging on Monday to buy unlimited amounts of bonds to keep borrowing costs low, Japan is set to follow the footsteps of other major economies towards “helicopter money” – money-printing by central banks to finance government debt.

Official data on Tuesday showed the widening hit to the jobs market from the outbreak. The March jobless rate rose to its highest in a year, while job availability slipped to a more than three-year low.