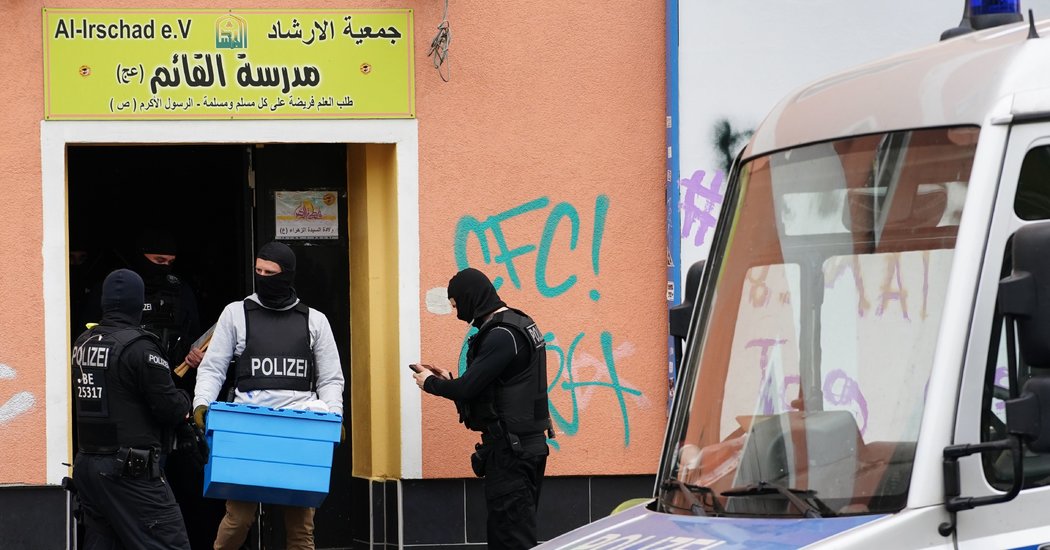 BERLIN — Germany on Thursday banned the Lebanese militant group Hezbollah from carrying out any activity on its soil and declared the group a terrorist organization, in a move, long sought by Israel and the United States, that deals a blow to its ability to operate in Europe.

Interior Minister Horst Seehofer ordered raids on four mosques and organizations suspected of being linked to Hezbollah, as well as some private addresses, as part of the measures.

“The activities of Hezbollah violate criminal law, and the organization opposes the concept of international understanding, whether in its political, social or military structures,” the interior ministry said in a statement.

Britain classified all of Hezbollah as a terrorist organization last year, a hardening in policy that brought it in line with countries including the United States, Israel, Saudi Arabia and, within the European Union, the Netherlands.

In Germany last year, a group of lawmakers pressed Chancellor Angela Merkel’s government to take a tougher stance against the group by including its political organization in the ban to ensure that it would not be able to raise funds in Germany, citing the country’s special responsibility to Israel because of Nazi-era atrocities against Jews.

Hezbollah began as an underground militant group that waged an insurgency against the Israeli occupation of southern Lebanon, which ended in 2000. Since then, it has remained virulently anti-Israel while accumulating greater power in Lebanon and more recently in Iraq and in Syria, where its fighters intervened to help President Bashar al-Assad defeat rebels seeking to oust him.

The group, which is backed by Iran, is the strongest military force in Lebanon, with thousands of trained fighters and more than 100,000 rockets and missiles pointed at Israel. Its opponents accuse it of using violence, including political assassinations, to cement its political power, while its supporters in Lebanon hail it as part of the “resistance” against Israeli and American policies in the region.

The United States designated Hezbollah as a terrorist organization in 1997, but European countries have generally taken a softer approach, which has allowed European policymakers and diplomats to continue to meet with the group’s officials. Hezbollah itself has consistently rejected any differentiation between its military and political activities.

Under German law, the country cannot outright ban a foreign organization, but the move on Thursday has the equivalent effect, making it impossible for Hezbollah to raise money and disseminate propaganda, whether online on in person.

Germany’s intelligence services believe that the group has as many as 1,050 followers in the country. Although they meet secretly in mosques or cultural clubs, they advertise their association openly on the internet.

The terrorism designation prohibits any public display of the organization’s symbols, whether during demonstrations, in print or online. It also allows the authorities to seize funds and investigate associated subgroups.

Richard Grenell, the U.S. ambassador to Germany, who has long pushed for Berlin to move against the group, welcomed the move. “The world is a little bit safer,” he wrote on Twitter.

Among the group’s symbols that are now banned are a yellow flag with a fist holding an assault rifle, previously often seen in an annual anti-Israel demonstration that attracts thousands of protesters in Berlin. The city had moved in recent years to prohibit the flag’s display during the march, which this year is scheduled for mid-May, though it is unclear whether it will go ahead given the restrictions on public life because of the coronavirus.

“Germany must no longer offer a refuge for the supporters of an Islamist organization which, driven by a deep hatred of Jews, incites people to violence and finances terror,” Josef Schuster, the head of Jewish Council in Germany, said in response to the ban.

Israel’s ambassador to Germany, Jeremy Issacharoff, also praised what he described on Twitter as a “welcome and significant decision,” and urged policymakers in Brussels to follow suit, adding: “Persistent threats by Hezbollah against Israel’s security and its efforts to undermine stability in Lebanon, Syria, Iraq, Yemen and more, demand a firm and resolute response.”