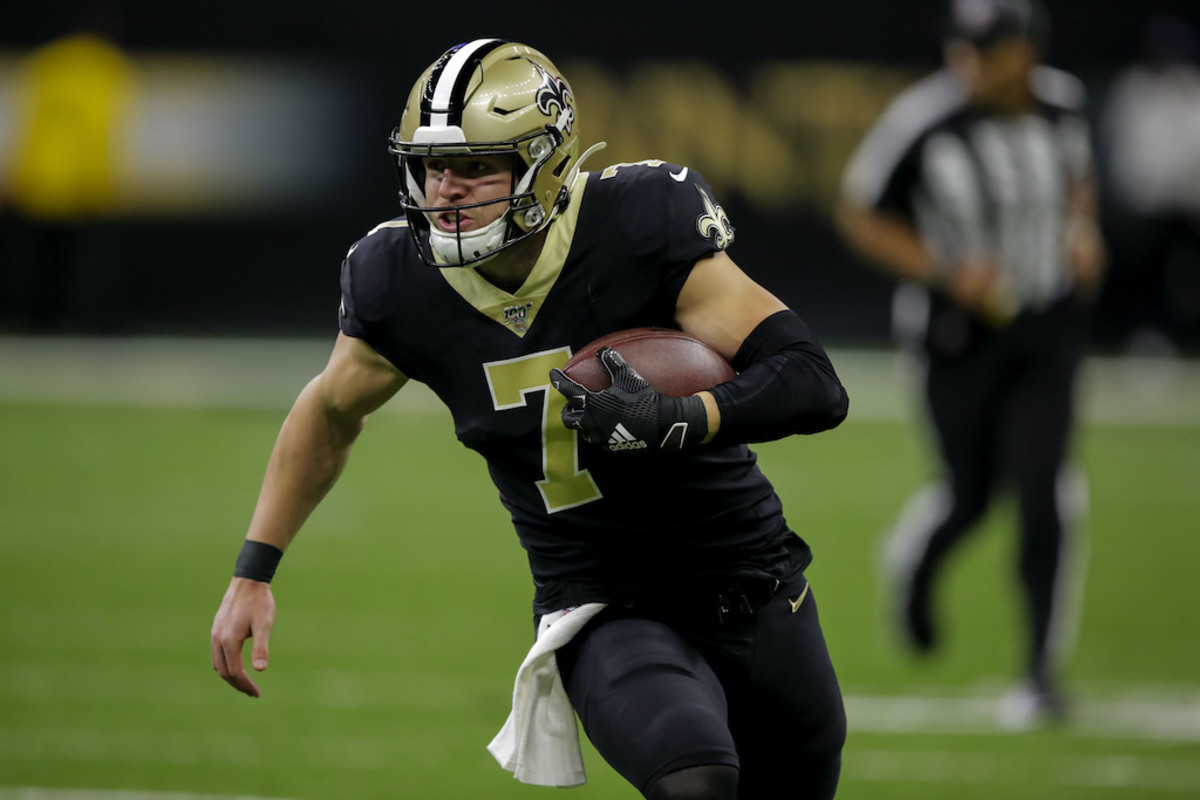 Is Taysom Hill a quarterback? Is he a wide receiver? A tight end? All of the above? Some in the New Orleans Saints community have used the label “offensive weapon” to describe Hill. While that may be apt, there is no “offensive weapon” position in fantasy football.

Hill has been listed, understandably, as a quarterback-only in all major fantasy formats since he came into the league as an undrafted free agent out of BYU in 2017. But calling him a quarterback was becoming more and more questionable given how head coach Sean Payton and the Saints were using him.

Future Hall of Famer Drew Brees has been entrenched at the starting quarterback position since signing with New Orleans in 2006. Between 2006-2018, Brees missed only three starts, so back-ups weren’t exactly getting a ton of reps. That includes Hill, who attempted only seven passes through the first two years of his career. However, Hill was still getting on the field in other ways—he had 40 touches in 2018 (37 rush attempts and three catches) and played on special teams.

Last season is when it became evident that Hill was less of a quarterback and more of a playmaker. Brees missed five starts with a thumb injury, and the Saints turned the starting quarterback job over to Teddy Bridgewater, not Hill. Hill attempted all of six passes in 2019 but touched the ball 27 times in the rushing game and 19 times as a receiver. He scored seven total touchdowns (six in the receiving game) in the regular season and added 75 yards and a touchdown on six touches in the Saints’ only playoff game.

That caused a dilemma for fantasy football league operators. What position(s) should Hill be eligible for in 2020? ESPN was first to make the move away from quarterback.

Quarterback eligibility has been stripped away in favor of tight end. By being listed at a skill position, fantasy managers on ESPN can now also use Hill in a flex spot. What does that mean for Hill’s fantasy value?

Let’s assume you play in a 12-team league with standard positions and PPR scoring. It’s hard to imagine starting anyone that isn’t named Travis Kelce, George Kittle, or Zach Ertz in a flex spot. However, you’d need to have two of those three players to even consider that possibility. Also, if you add Mark Andrews, Austin Hooper, and Darren Waller to that group, one would need to own two of the top six tight ends to ever even consider starting one at flex. So let’s rule out Hill spending any significant time at that spot for fantasy teams. How about tight end?

Hill’s 390 total yards, seven total touchdowns, and 19 catches were good for 100 PPR fantasy points last season. If he were eligible last season, that would’ve ranked as the TE22 just behind Jimmy Graham.

It’s unlikely he increases his touchdown total. The Saints now have a viable No. 2 wide receiver in Emmanuel Sanders and tight end Jared Cook emerged as a significant threat in the back half of the season. Also, only 23 pass-catchers had more receiving touchdowns in 2019 than Hill. So any increased production must come either from rushing touchdowns (they already have Alvin Kamara and Latavius Murray) or more receptions. Neither seems primed for a major boost.

It’s more likely Hill finishes outside of the top 20 TEs than he finishes in the top 15. Keep in mind, this is what a 133-point fantasy season (the average of the last three years’ worth of TE12s) looks like 40 catches, 510 total yards, and seven touchdowns. To accomplish that goal, Hill needs an 111% increase in catches and a 31% increase in total yards while maintaining his very high touchdown rate. I can’t see that happening.

Hill is nothing more than a dart throw if you wait on the tight end position in fantasy drafts. He could be useful at times off the waiver wire during bye weeks, but he should be ranked as a low-end TE2.

These Players Received a Fantasy Boost From NFL Draft Results