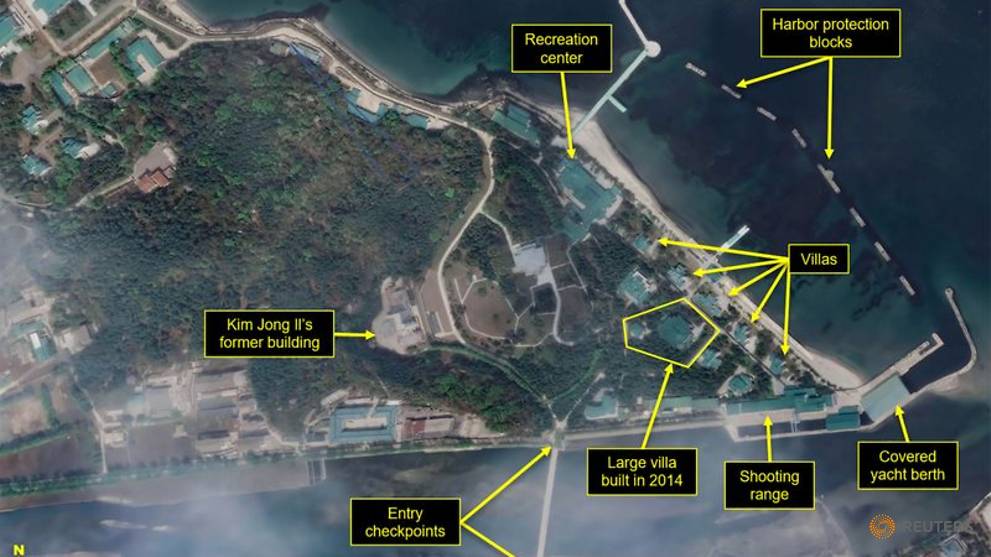 SEOUL: Satellite imagery showing recent movements of luxury boats often used by North Korean leader Kim Jong Un and his entourage near Wonsan provide further indications he has been at the coastal resort, according to experts who monitor the reclusive regime.

Speculation about Kim’s health and location erupted after his unprecedented absence from Apr 15 celebrations to mark the birthday of his late grandfather and North Korea’s founder, Kim Il Sung.

On Tuesday, North Korea-monitoring website NK PRO reported commercial satellite imagery showed boats often used by Kim had made movements in patterns that suggested he or his entourage may be in the Wonsan area.

That followed a report last week by a US-based North Korea monitoring project, 38 North, which reported satellite images showed what was believed to be Kim’s personal train was parked at a station reserved for his use at the villa in Wonsan.

Officials in South Korea and the United States say it is plausible Kim may be staying there, possibly to avoid exposure to the new coronavirus, and have expressed scepticism of media reports he had some kind of serious illness.

They caution, however, that Kim’s health and location are closely guarded secrets and reliable information is difficult to obtain in North Korea.

The last time official media in North Korea reported on Kim’s whereabouts was when he presided over a meeting on Apr 11, but there have been near-daily reports of him sending letters and diplomatic messages.

Kim’s seaside compound in Wonsan, on the country’s east coast, is dotted with guest villas and serviced by a private beach, basketball court, and private train station, according to experts and satellite imagery. An airstrip was bulldozed last year to build a horse riding track, while a boathouse nearby shelters Kim’s Princess 95 luxury yacht, valued at around US$7 million in 2013.

“It’s one of his favourite houses,” said Michael Madden, a North Korea leadership expert at the US-based Stimson Center, who has compared Kim’s affinity for Wonsan to US President Donald Trump’s favoured resort, Mar-a-Lago in Florida.

Madden said Kim is believed to have about 13 significant compounds around the country, though he appears to only regularly use about half of them.

“All of them are set up to serve as the leader’s headquarters, so they are all equipped for him to run the country,” he said.

Wonsan is one of the larger and better appointed compounds, but it also has a useful location that allows Kim to easily travel to other areas along the coast, or return quickly to Pyongyang in his private train or along a special highway designated for use only by the Kim family or top officials, Madden said.

Wonsan also holds symbolic power for the Kim dynasty: It was there Kim Il Sung, who helped found North Korea at the end of Japanese colonial rule in 1945, first landed with Soviet troops to take over the country.

Wonsan is believed by some experts to be Kim Jong Un’s birthplace, partly because he spent his early years at the family’s palace there, although official history has never confirmed where he was born.

The Japanese chef Kenji Fujimoto, who worked for the Kims and visited Wonsan, recounted in his memoirs how a young Kim Jong Un described rollerblading, playing basketball, riding jet skis and playing in the pool at the compound.

The Wonsan area has also become emblematic of Kim’s strategy for survival based on a combination of economic development, tourism, and nuclear weapons. He is rebuilding the city of 360,000 people and wants to turn it into a billion-dollar tourist hotspot.

In recent months, the project has been repeatedly delayed, undermined in part by international sanctions imposed over the North’s nuclear and missile programmes, which have restricted its ability to seek foreign investment.

Wonsan has also been the scene of some of Kim’s renewed military drills and missile tests, which he resumed amid increasing frustration with a lack of progress in denuclearisation talks with the United States and South Korea.