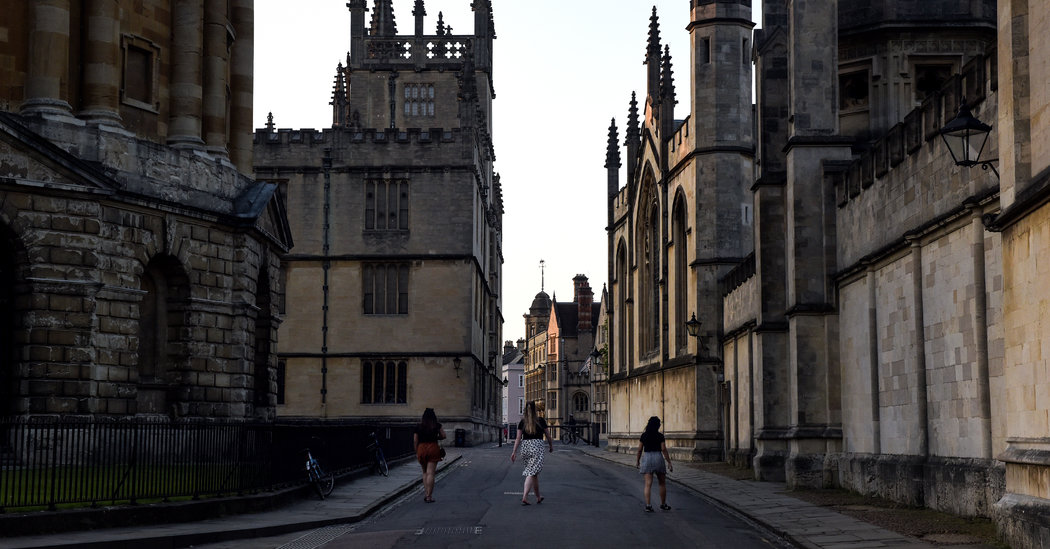 While most research teams have started with small clinical trials on a few hundred patients, scientists at the university’s Jenner Institute are scheduled to test their new coronavirus vaccine on more than 6,000 people by the end of May.

The institute had a head start, having already proved that similar inoculations did not harm humans. If the vaccine is effective and approved by regulators, the scientists say, the first doses of it could be available by September.

Details: Six rhesus macaque monkeys inoculated with the Oxford vaccine and exposed to the virus were healthy 28 days later. The exposure had consistently sickened other monkeys in the lab — a promising, though not guaranteed, sign.

The United States has, by far, the world’s largest Covid-19 outbreak, with more than 987,000 cases. On Monday, the death toll surpassed 50,000, according to data compiled by The Times.

Yet a few states — including Colorado, Minnesota and Mississippi — are beginning to restart their economies. Even New York State, the epicenter of the U.S. outbreak, will allow some “low risk” businesses like construction and manufacturing to reopen after May 15.

Analysis: Three journalists reviewed every word Mr. Trump has spoken on the virus since March 9 — more than 260,000 words. They found a display of presidential hubris and self-pity unlike anything historians say they have seen before.

In memoriam: Lorna Breen, an emergency room doctor at a New York hospital that treated many coronavirus patients died by suicide on Sunday. “Make sure she’s praised as a hero, because she was,” her father said. “She’s a casualty just as much as anyone else who has died.”

Above, the forest at Sandarmokh in northwestern Russia where thousands of Stalin’s victims were executed. Yuri Dmitriev, an amateur historian, had made it his life’s work to commemorate these political prisoners after discovering their graves more than 20 years ago.

Mr. Dmitriev is awaiting trial on what his supporters dismiss as blatantly fabricated charges of pedophilia — accusations frequently used by the Russian authorities to silence unwanted voices.

Iran nuclear deal: Secretary of State Mike Pompeo is preparing a legal argument that the U.S. remains a participant in the Iran nuclear accord renounced by President Trump — a move meant to pressure the United Nations Security Council to extend an arms embargo.

Snapshot: Above, Easter Island, where around 1,000 monolithic statues dot the landscape. The beauty of the island, which is 2,200 miles off the coast of Chile, is the latest in our series “The World Through a Lens,” in which photojournalists transport you virtually.

What we’re reading: This essay in The Paris Review about solitude and writing. “Toward the end of his life, Jean-Jacques Rousseau sought to absent himself from society,” writes Kathleen Flynn, an editor on our Upshot team. “Gavin McCrea, one of my favorite novelists, looks at how this experiment went wrong, and yet succeeded magnificently.”

Cook: It’s the combination of herbs, chile, lime juice and fish sauce that make the Thai dish larb so appealing. You can use chopped-up mushrooms, vegan meat or even chopped fish fillets in place of ground meat.

How social distancing became the strategy

Until a vaccine or some other treatment is found, maintaining distance between people is among the best tools to limit the spread of the coronavirus. The idea is quite literally medieval, but the modern form owes a lot to former President George W. Bush, some dedicated researchers and a 14-year-old girl’s science project.

What was the genesis of this story?

I worked on an earlier article about the failures of the Trump administration’s response. And I was communicating with a bunch of the scientists raising early alarms on what we know as the Red Dawn emails. In the process of getting to know some of them, I learned about the Bush administration’s urgent focus on the probability of a pandemic.

What were the lessons from the 1918 flu?

Different teams of researchers compared the toll in St. Louis — which moved relatively quickly to close schools, churches, theaters, saloons, sporting events and other public gathering spots — to the toll in Philadelphia. That city went ahead in September 1918 with a long-planned parade to promote war bonds that drew hundreds of thousands of spectators. The difference showed in the death tolls. “Timing matters,” said one researcher.

How did a 14-year-old girl’s science project play into this history?

She was fascinated by social networks and how they worked. And her dad was this super-advanced scientist in New Mexico. She did a class project in which she built a computer model of social networks at her Albuquerque high school. Her dad piggybacked on her work, and together they looked at what effect breaking up school networks would have on knocking down a contagious disease.

The outcome was startling. By closing the schools in a hypothetical town of 10,000 people, only 500 people got sick. If they remained open, half of the population would be infected.

Thank you
To Melissa Clark for the recipe, and to Theodore Kim and Jahaan Singh for the rest of the break from the news. Andrea Kannapell, our Briefings editor, wrote today’s Back Story. You can reach the team at briefing@nytimes.com.

P.S.
• We’re listening to “The Daily.” Our latest episode is about the oil surplus during the coronavirus pandemic.
• Here’s today’s Mini Crossword puzzle, and a clue: Starter of a Zoom meeting (four letters). You can find all our puzzles here.
• The Times and Verizon are giving every high school in the U.S. free access to Times journalism through July 6.