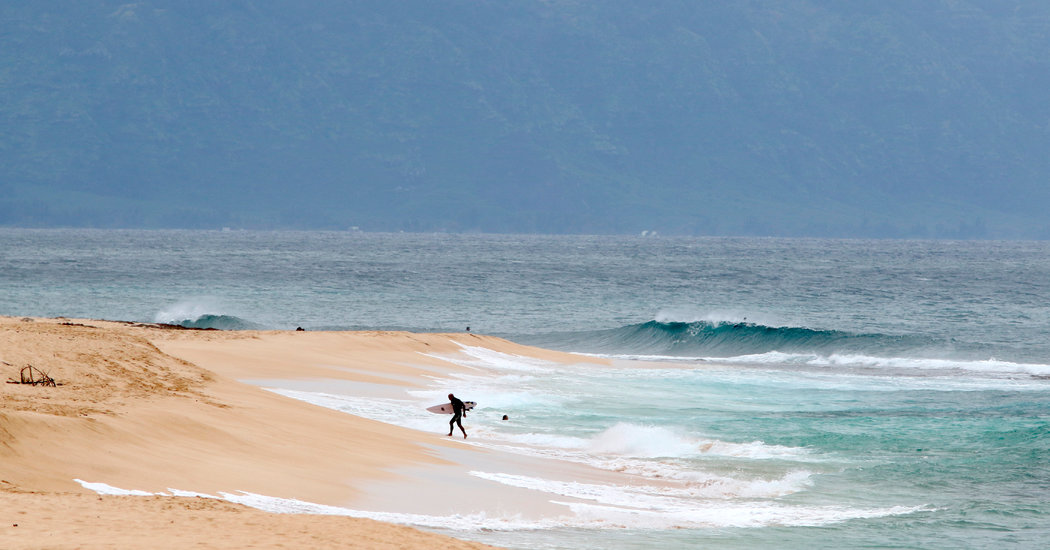 They called it the Covid-19 swell.

Spectacular waves more than 25 feet high barreled on Tahiti’s famed Teahupo’o reef that day a month ago. Audible from miles away, Teahupo’o — home of the 2024 surfing events of the Paris Olympics — normally echoes like thunderous Morse code, calling in the best surfers from every corner of the globe. They would have buzzed to the reef by the dozen, spilling out of boats and riding Jet Skis to tow into waves as film crews in helicopters circled above.

But this time, very few people were out. “Not even one boat,’’ said Tikanui Smith, a Tahiti local and professional surfer whose exploits at Teahupo’o have earned him multiple Ride of the Year nominations from the World Surf League.

Something similar happened as a southern swell broke at Pleasure Point in Santa Cruz County, Calif., on April 9, the first day of what would be a weeklong beach ban. “All we could do was stand there and watch it break,” said Kyle Thiermann, a professional surfer. “On a day that good, usually there are 100 surfers in the water. It made me feel like I’d jumped in a time machine and landed in a time before surfing.”

From Bali to Brazil, Costa Rica to California, the pandemic has widely shut down surfing, either through outright bans on access to beaches or from the inability of surfers to travel to them. But enough spots remain open to foment a schism between surfers who are able to get in the ocean and those stuck at home.

The World Surf League suspended its Championship Tour on March 12, just two weeks before its opening event on Australia’s Gold Coast. The annual tour takes surfers to some of the world’s most famous waves — from the Eastern Cape of South Africa to the North Shore of O’ahu, Hawaii. The announcement rocked the surf world. Four days later, the league canceled or postponed all of its events through May.

But surfers are still drawn to the water, legally or otherwise.

In Australia, decisions on restricting access to the surf have fallen to the local councils. Some beaches in Sydney have been closed for weeks, and others like Bondi Beach have reopened from 7 a.m. to 5 p.m. on weekdays and for water sports only. Laying a towel down can bring a $1,000 fine.

The American surfer Lakey Peterson, the third-ranked woman on the 2019 World Surf League Championship Tour, has been in Australia since before the tour was suspended. Her husband is from Bells Beach, Australia, which was set to host the second Championship Tour event. Peterson has been able to surf four hours a day, expanding her repertoire of tricks.

“For nine years, I haven’t had this much time to be able to work on things and practice,” she said. “I’ve been working on lay backs, aerials a fair amount. Just trying to better myself in the water.”

And across the Hawaiian Islands, lounging or loitering on the beach is prohibited but people have not been barred from going into the ocean.

Kai Lenny, a top-ranked competitor in the World Surf League, had arrived in Tahiti in early March to compete in the Papara Open, a highly anticipated event, but it was canceled, leaving him and other surfers scrambling to get home. He can keep surfing.

“We’ve been very fortunate here,” Lenny said from his home in Maui. “We’re allowed to go surfing, windsurfing and do all these multiple sports, so long as we’re keeping social distance.”

But many of Brazil’s beaches are closed, which means that Gabriel Medina, a two-time world champion and last year’s runner-up, is moored on dry land in Maresias, a beach town in São Paulo state. He was preparing to leave for the airport to catch his flight to Australia when he learned the tour had been suspended.

Even as beach access remains uneven, there is peer pressure to stay local and abide by government restrictions, the three-time world champion Mick Fanning of Australia said. “There’s a big push to surf your postal code,” he said. “I haven’t really ventured south. I just don’t feel like it’s right.”

World Surf League officials said they remained hopeful they could salvage a 2020 Championship Tour. So far, two events — the Corona Open, which was supposed to open the season on Australia’s Gold Coast, and the Quiksilver Pro G-Land in Indonesia, which was scheduled for June — have been canceled. Three other events have been postponed, including the Oi Rio Pro, the league’s chief executive, Erik Logan, announced on Tuesday. Rio is the best attended event on the league calendar.

Logan also announced on Tuesday that the league would build a one-day championship event onto the end of the tour calendar starting in 2021, with the final heat of the year determining the world title. Logan was less clear on what would happen this year.

After staying dry for so long, Medina estimated that he would need three to four weeks of surfing and hitting the gym regularly to be ready for competition.

And for every patient professional there are countless hobbyists desperate for salt water.

The drive to get in the water has manifested in offenses from the comical to the absurd and in enforcement that has varied from shots fired to nothing at all. In Costa Rica, a surfer fresh out of the water sprinted from a police officer who fired on him from behind. In Malibu, Calif., a stand-up paddler defied beach closures to catch over 20 perfect waves, then attempted to evade lifeguard and sheriff’s boats by paddling to safety. Spoiler alert: He didn’t make it.

Last week, beaches reopened in parts of Southern California, including Ventura County, where Mayor Matt LaVere of Ventura advocated a softer closure that provided ocean access but no sun bathing, bathrooms or parking. Oceangoers have to arrive on foot or by bike.

“Ventura has some of the best waves in the world,” LaVere, a surfer, said. “Telling people in Ventura they can’t surf is like telling them they can’t breathe air.”

Chad Nelsen, the chief executive of the Surfrider Foundation, was more circumspect. When the closures began, Surfrider, which has fought for beach access for 35 years and opened scores of beaches to surfers around the world, began its “Stay Home, Shred Later” campaign.

“People are losing their patience, which is completely understandable,” Nelsen said. “But the risk is we open places too soon, we increase community spread, get a second wave of infections, people suffer and we see extended closures.”