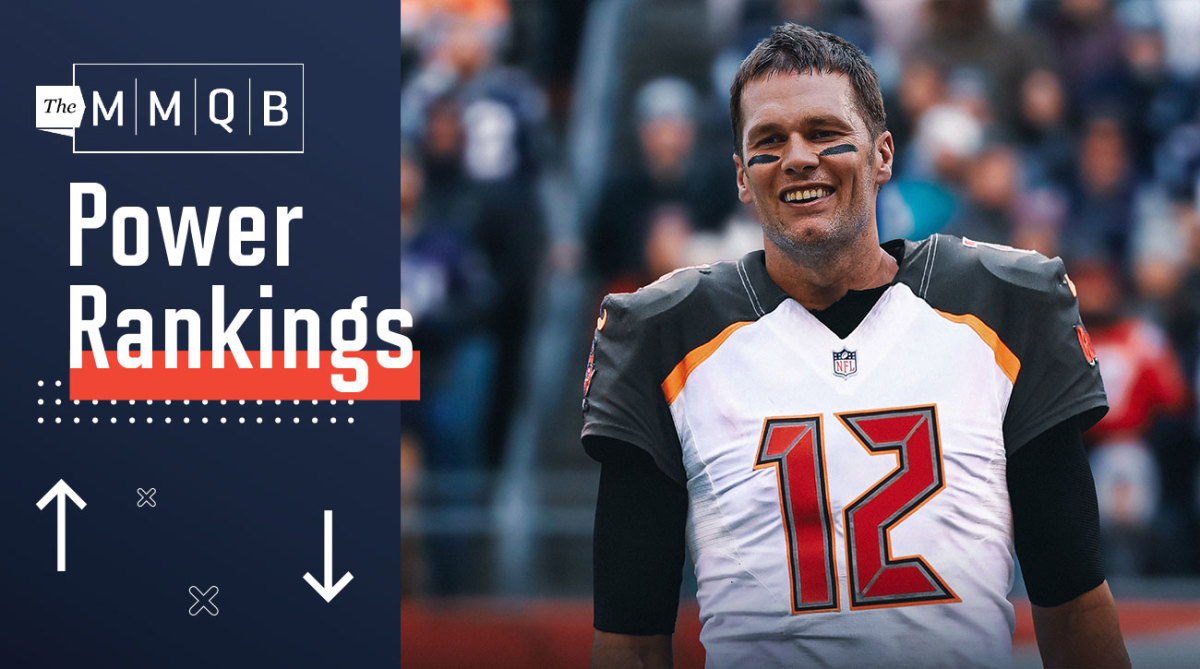 We’ve now crossed a few of the NFL’s major offseason milestones. And while much of the remaining offseason is in flux, one thing is a certainty in this world … power rankings!

Given that Tom Brady’s free agency is the story of the year, it’s no surprise to see the Buccaneers have moved up and the Patriots have moved down since we last voted. But the Pats aren’t alone. Three teams tied for the biggest jump, with the Bucs, Eagles and Lions all jumping seven spots. And the Browns and Cardinals came up six each. So it’s not just about signing Tom Brady, or even upgrading QB. Some of our voters are just expecting bounce-back seasons from a few of 2019’s underachievers.

On the flip side, the Texans joined the Patriots in dropping eight spots. Good luck, Bill O’Brien! Check out how all 32 teams stack up below.

When you win the Super Bowl and follow it up by bringing back 20 of 22 starters, including the consensus best QB in the league, you stay on top of the power rankings.

Patrick Mahomes won MVP in his breakout second season, then won a Super Bowl the next year. The Ravens are hoping Lamar Jackson follows the same trajectory.

The 49ers blew a 10-point lead in the fourth quarter of the Super Bowl, and now they’ll have to fight off the dreaded Super Bowl hangover without players like Joe Staley, DeForest Buckner and Emmanuel Sanders. But they are still expected to be a force in the NFC.

After three straight heartbreaking playoff exits, Drew Brees is back for another crack at it with a loaded roster.

The Eagles didn’t help themselves in the draft as much as many would have liked them to, but our panel is envisioning a bounce-back year for a squad that won four straight games just to reach the playoffs.

The NFC West may be the toughest division in football, but never overlook the Seahawks, who are in the hunt every year.

Could they have used that first-round pick on a player who’d help them in 2020? Sure. But the Packers still have plenty of talent with Jordan Love watching Aaron Rodgers from the bench this year.

The Titans caught lightning in a bottle down the stretch and decided to run it back. How long can they ride that lightning?

AllTitans: Titans Willing to Look Into, Beyond Draft Picks’ Missteps

We know they have the defense, but it’ll be critical for Stefon Diggs to help Josh Allen take a big step forward like the Bills’ front office thinks he can.

The Jason Garrett Era is finally over, and there’ll be plenty of pressure on Mike McCarthy after a great draft in Big D.

Something tells us if Tom Brady throws 30 touchdowns this year, they won’t be accompanied by 30 interceptions. That’s an improvement already.

The Rams have moved on from so many key pieces of their Super Bowl LIII team. Let’s see how much of it was really Sean McVay.

The Vikings extended Kirk Cousins after he won his first career playoff game, and now they’ll try to build on that for another year.

InsideTheVikings: The Best and Worst Day 3 Picks by the Vikings

The Steelers could have easily been a playoff team with a healthy Ben Roethlisberger last year, but our panel wants to see him healthy before we put them back in the top tier of the AFC.

A quiet offseason for the Patriots, who are always a top-three team in our preseason rankings. HEY WAIT A SECOND.

PatriotMaven: A Look at the Patriots’ 2020 Draft Class

The Colts told us they believed in Jacoby Brissett last year, but we expect them to have a higher ceiling with Philip Rivers.

AllColts: Lots to Like About Colts’ NFL Draft Class

The Falcons played well enough in the second half to save some jobs year, but the pressure is on for this coaching staff to keep that momentum going.

Nobody has fallen further since our last rankings than the Texans, a reflection of the DeAndre Hopkins trade and a lack of faith in Bill O’Brien in general.

State of the Texans: Blacklock Looking Forward to Being Mentored by J.J. Watt

The Chargers got their guy in the draft, but a talented roster will have be led by Tyrod Taylor, at least to start the year.

Orr: Justin Herbert Brings the Deep Ball Back to the Chargers

After falling so far short of expectations in 2019, the Browns enter 2020 much more quietly—with a chance to take a jump closer to what we expected of them.

The Cardinals may be No. 21 in these rankings, but they’re going to be a popular sleeper pick September.

The Raiders loaded up on draft capital by trading away Khalil Mack, and now we actually get to find out if that deal was worth it.

BearDigest: Ryan Pace Simply Liked Too Much About Picks to Trade

The jury’s still out on Drew Lock, but he’s got plenty of weapons to take a leap in 2020.

The Lions ended the season on the league’s longest losing streak and we had them ranked last the week after the Super Bowl. Apparently our panel is feeling optimistic.

The AFC East is as open as it’s been in a long time if the Jets can make a leap.

Tank For Tua worked, and they didn’t even tank perfectly. Now Dolphins fans can root for Tua (or Ryan Fitzpatrick) to win every week without feeling conflicted.

GiantsCountry: Third-Round Players the Giants Missed Due to the Leonard Williams Trade

If Joe Burrow is the real deal, Bengals fans won’t mind a little 2-14 season to move on from the Andy Dalton era.

The Panthers said goodbye to some of their long-time fan favorites and now they start from the bottom with Matt Rhule and Teddy Bridgewater.

Washington reportedly considered a QB with the second pick, but just because they chose Chase Young doesn’t mean Ron Rivera is tied to Dwayne Haskins long-term.

Is it Minshew Mania or Tank For Trevor? Might depend how the season starts.

JaguarReport: Marrone, Caldwell Explain Why They Were Sold on Henderson