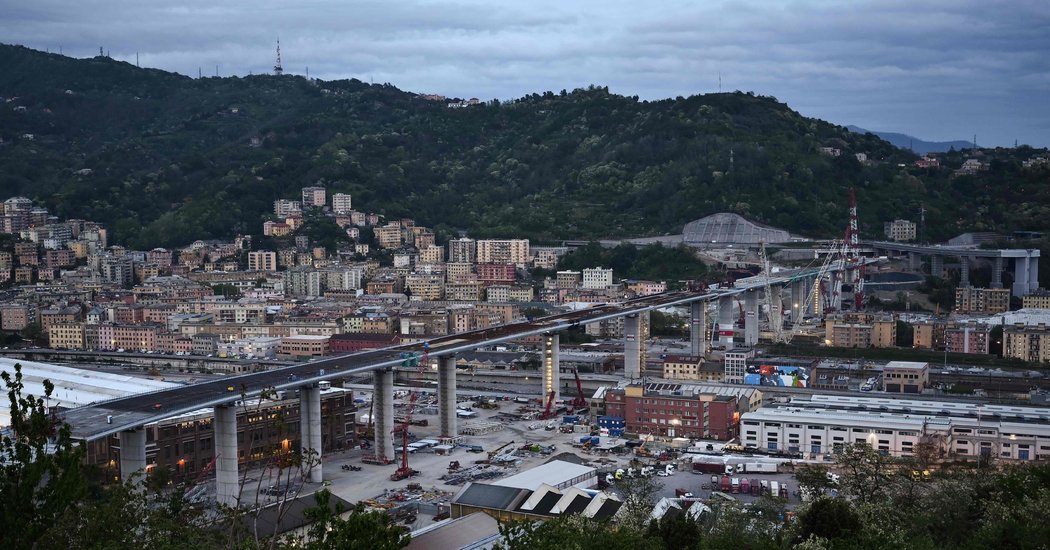 ROME — When the Morandi Bridge, a vital east-west transportation artery in the heart of Genoa, collapsed on Aug. 14, 2018, killing 43 people, there was little reason to think that its replacement would be in the final phases of construction less than two years later.

Public works projects in Italy are not known for efficiency, even under the best of circumstances, and the months after the accident were marked by a series of obstacles: political turmoil that led to a change of government, judicial investigations into the cause of the collapse, and a debate over whether the privatization of Italy’s roadways and other infrastructure had put people at risk.

And that was before the coronavirus struck.

Yet on Tuesday, the last section of the deck that forms the main structure of the new bridge was hoisted into place, completing a 3,500-foot-long spine that remains to be covered in concrete and then finished with a layer of asphalt.

From Genoa, “a new light shines, giving hope to all of Italy,” said Prime Minister Giuseppe Conte, who traveled to the city for a ceremony as the final, 150-foot section was put in place, setting the stage for the bridge to open to the public sometime in late July.

“We have shown everyone that good things can be done in time, in the right way and within cost. This is an example for the city of Genoa, for our history,” said Massimo Bucci, the mayor of the city and the government-appointed “extraordinary commissioner of reconstruction” for the bridge, a position that provided the clout to snip through lots of red tape.

“We now have the virus — we are facing another big challenge but I am certain that we will win, like you, and like all of us, were able to win this challenge.”

When it was built, in the 1960s, the Morandi bridge was widely celebrated for its artistry and innovative engineering. Its collapse 20 months ago, when a section of roadway fell 150 feet onto a riverbed, became a source of national embarrassment.

An investigation into the causes of the collapse revealed shortcomings in the day-to-day maintenance and in public oversight of Italy’s aging infrastructure. The disaster left Genoa effectively split into two, throwing the lives of its residents into disarray.

The new bridge, budgeted at 200 million euros or about $216 million — and presumably the first to be constructed under the constraints of social distancing — will reunite the city and allow many Genoese to go back to living more normal lives. And its completion in record time has become a source of national pride.

Tuesday’s operation was a milestone for its builders, a joint venture between the Italian construction company Salini Impregilo and the infrastructure subsidiary of the state-run shipbuilder Fincantieri.

“As far as we are concerned, the bridge is accessible, albeit only on foot,” said Fincantieri’s chief executive, Giuseppe Bono, during a streamed news conference with Italy’s Foreign Press Association on Monday.

“I understand the celebration, I am happy for that, but as the commissioner of the project I will be happy only when it’s finished,” he said in a telephone interview on Monday.

The bridge was designed by the architect Renzo Piano, who donated his services to his native city. His design includes an underbelly reminiscent of the curved hull of a ship. The bridge will be fitted with sensors and robots inside the deck’s sidings that will continually monitor the structure and carry out basic maintenance. Solar panels on the south side make the bridge energy self-sufficient.

The sensors will allow officials to see how the bridge is responding to traffic flows, and assess what that will mean for the future, said Mr. Bono, and the technology should provide additional security.

The previous bridge, designed and built in the 1960s by the man for whom it was named, Riccardo Morandi, “had not taken into account a future increase in traffic,” he said, and the wear and tear on the structure contributed to its collapse.

Italy was the site of the first coronavirus outbreak in Europe, and it was initially hit harder than any other country on the Continent, but even that did not halt construction. Work was carried out in nonstop shifts, seven days a week, 24 hours a day, though the coronavirus did require some adjustments.

Fincantieri devised its own scanner to take the body temperature of everyone entering the construction site. Workers — masked and gloved — were tracked and their contacts monitored, and social distancing was imposed.

There was only one case of coronavirus at the bridge site, a worker who operated a modular transporter, originally from Bergamo, Mr. Bono said, and 22 people who had been in contact with him were immediately isolated. They are now back on the job, Mr. Bucci said.

For weeks now, the bridge has been illuminated every evening with beams of green, white and red light, the colors of the Italian flag, to pay homage to those fighting the coronavirus outbreak.

The bridge shows that “when it wants to,” Italy “can reach the objectives that it sets for itself,” said Mr. Bono of Fincantieri, which mostly builds cruise ships and had never tackled a bridge before.

“At the start, there was a lot of skepticism,” he conceded. “The truth is, we did it.”

It helped that the reconstruction of the bridge became a national priority, so procedures were streamlined. And Mr. Bucci, the mayor and commissioner of the project, also had a business background, and worked for 22 years in the United States for several companies. As both mayor and commissioner, he said, he had a lot of power from “the administration standpoint.”

When you have power to make things happen, Mr. Bucci said, “you just do it and it works.”

Mr. Bucci said he had hoped to open the bridge to the public by April, but that date was pushed back because the demolition of the Morandi Bridge was complicated by concerns about the spread of asbestos, as well as inclement weather.

Reopening the bridge will have a huge effect on the city, hobbled by the loss of one of its principal connections. Though alternative transportation routes were established, Mr. Bucci said that one study had calculated the additional costs — “due to pollution, time, gasoline consumption, loss of business” — at around €6 million a day.

Pietro Salini, chief executive of Salini Impregilo, said in a telephone interview that the success of the bridge should become a model for future public works projects, which he sees as critical in lifting Italy out of the economic slump that is likely to endure even once the coronavirus is brought under control.

The Genoa bridge shows that “we can always make it,” Mr. Salini said. “No matter how desperate things appear, no matter how sad the future we are facing, it shows that working together we can overcome everything.”