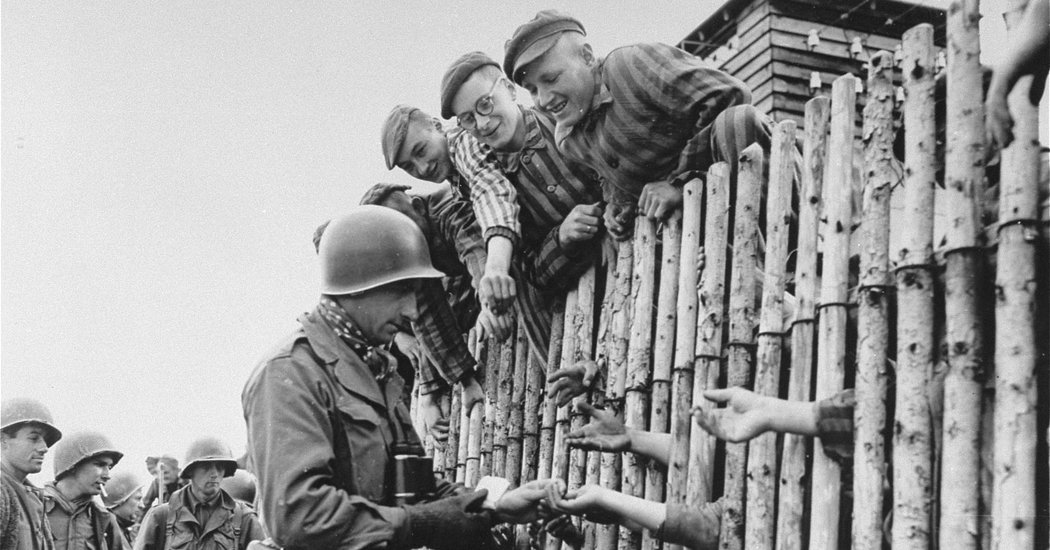 The latest article from “Beyond the World War II We Know,” a series from The Times that documents lesser-known stories from the war, explores the complex and sometimes dehumanizing interactions between the concentration camp prisoners and the Allied soldiers who liberated them.

On April 10, 1945, the 84th Infantry Division liberated Hannover-Ahlem concentration camp. Confronted with walking skeletons and cadavers piled in bins, many service members cried and vomited. After inspecting the squalid camp hospital filled with men he described as “catatonics,” Capt. William J. Hagood Jr., a doctor in the 335th Infantry Regiment of the 84th Division, wrote in a letter to his wife, “You have to see it — and you are so stunned, you only say it was horrible. You can’t think of adjectives. We weren’t in the place two minutes before our eyes filled with tears.”

The liberation of the camps involved more than 30 American military units, such as the 42nd and 45th Infantry Divisions at Dachau, the Fourth and Sixth Armored at Buchenwald and its subcamps, and the 82nd Airborne at Landsberg. These soldiers were responsible for organizing medical care, supplying food and eventually repatriating the freed prisoners, and so served as primordial architects of the survivors’ journeys from camp degradation to the postwar search for their lost humanity. According to accounts, not all soldiers acted equally when confronted with that responsibility, and some further mistreated them, extending the trauma they had endured while imprisoned. It’s hard to imagine that survivors could have suffered further humiliation on their passage to freedom. But the portrayal of liberation in some of their memoirs reveals that the end of the Holocaust opened new wounds. It also offered unexpected opportunities for healing.

As the first presence from the outside world, the Allied liberators presented a dual reality for detainees in concentration camps. Jorges Semprún, a Spanish communist and political activist interned in Buchenwald, wrote in his memoir “Writing or Life” that prisoners attained long-awaited freedom, but the way some liberators treated them reinforced the idea that they had become less than human. “It’s the horror in my eyes that’s revealing the horror in theirs,” he wrote of his first encounter with British soldiers. “If their eyes were mirrors, it seems I’m not far from dead.” At the beginning of their internment, prisoners who weren’t selected for the gas chamber learned quickly from Nazi guards that they weren’t viewed as humans but as animals. Orders were barked, compassion was nonexistent. Semprún hadn’t expected that his liberators would view him in the same way.

Semprún’s brush with his liberators echoed Primo Levi’s description of his interactions with the Soviets at Auschwitz in January 1945. “They did not greet us nor did they smile,” Levi wrote in “The Reawakening.” “They seemed oppressed not only by compassion but by a confused restraint, which sealed their lips and bound their eyes to the funereal scene.” Like Semprún, Levi compared this experience to the sense of shame felt in front of German captors: “It was that shame we knew so well … every time we had to watch, or submit to, some outrage: the shame that the Germans did not know, that the just man experiences at another man’s crime.”

[Sign up for the At War newsletter for more about World War II.]

Some liberators treated the surviving prisoners this way not only because they were disgusted by the reality of the heinous crimes committed upon them, but also because they were poorly prepared for what they would find. The historian Robert Abzug, who studied the way American G.I.s reacted to liberation, found that even the most “battle-weary” service members were stunned, unable to reconcile the Nazi terrors with their bloodiest memories of combat. Yet Allied intelligence had known that Jews were being rounded up, deported and massacred for years. In August 1944, major American newspapers covered the Soviet discovery of Maidanek, an extermination camp near the Polish city of Lublin. Similarly, in late January and February 1945, the Soviet liberation of Auschwitz made headlines, but these reports didn’t seem to prepare the soldiers for what they would find. When Captain Hagood was being taken to Hannover-Ahlem, he thought it was a prisoner-of-war facility, which he might have assumed would follow fair treatment laws outlined in the Geneva Conventions that Germany signed in 1929. He wrote: “All the grisly scenes I’d witnessed in four years of combat paled as I viewed the higgedly-piggedly stack of cadavers.”

Unlike Semprún and Levi, who met their liberators while still in Buchenwald and Auschwitz, Ruth Kluger encountered her first American in the town center of Straubing, Germany, after escaping Christianstadt. In her memoir, “Still Alive,” she recalled that when her mother told him they had fled a concentration camp, he put his hands over his ears, having apparently had his fill of those who claimed to be camp survivors. “Here was my first American, and he deliberately closed his ears,” she recalled. “One thing, I figured, was certain: this war hadn’t been fought for our sake.”

Some of these reactions suggest soldiers were experiencing a kind of shock, while others point to anti-Semitism, even within the most senior echelons of the military. After inspecting displaced persons camps in Germany in summer of 1945, Earl G. Harrison, a lawyer and American representative to the Intergovernmental Committee on Refugees, expressed harsh criticism of the ways Jews were treated by the Americans, claiming evidence of conditions similar to the Nazi-run concentration camps from which they had been freed. He summarized his observations by stating, “We appear to be treating the Jews as the Nazis treated them except that we do not exterminate them.” When President Harry Truman read the report, he ordered Gen. Dwight D. Eisenhower to inspect displaced persons camps. During a visit to a camp in Bavaria, Gen. George S. Patton told Eisenhower that he blamed the refugees for the squalor. He complained they were “pissing and crapping all over the place,” and wanted to open his own concentration camp “for some of these goddamn Jews.” Maj. Irving Heymont, who was stationed at the Landsberg displacement camp, said in his letters that some Americans proclaimed that they preferred German civilians, who seemed normal, to the Jewish survivors, whom they characterized as animals undeserving of special treatment.

Despite these racist views, meaningful connections happened in the days and months following liberation — on physical and social levels. Survivors reported that liberators who handled their bodies gently in the days following liberation — when the slightest medical error meant life or death for those in the most critical condition — brought an immediate sense of restored humanity. Levi compared baths from Soviet nurses to the one forced upon him by American military personnel. The nurses washed “with tender hands” and “soaped, rubbed, massaged, and dried” him “from head to foot.” This bath was not one “of humiliation, no grotesque-devilish-sacral bath, no black-mass bath like the first one which had marked our descent into the concentration camp universe nor was it a functional antiseptic, highly automatized bath, like that of our passage into American hands many months later.”

Survivors also said that social connections, especially talking with soldiers, helped to restore their sense of self in the days and months following liberation. Robert Antelme, a French survivor of Dachau, suggested in his memoir, “The Human Race,” that the need to communicate competed with the need for proper nourishment: “We wanted at last to speak, to be heard. We were told that by itself our physical appearance was eloquent enough.” However, he added that even when they could speak, “it was impossible to bridge the gap we discovered between the words at our disposal and that experience … what we had to tell would start to seem unimaginable.” Survivors were afraid that they wouldn’t be heard, and also that no one would believe them.

Before telling the story of their dehumanization in the camp, some survivors needed liberators to first see them as they had been before the war: as people with passions and professions. Semprún was asked to show Buchenwald to a Jewish-American Army officer whose family had moved to the United States from Germany when he was young. They became friends when Semprún, a philosophy student, referenced Goethe, who had lived not far from Buchenwald. As a gift, the officer took Semprún for a tour of Goethe’s house nearby. Having established their shared appreciation of German literature, Semprún felt able to narrate some of the most painful memories of his suffering.

Levi returned to his family in Turin, Italy, after spending almost nine months in displacement camps. Others remained in the camps for more than a year. Bergen-Belsen, which became one of the largest in Germany, finally closed in 1951, six years after the liberation. Survivors for whom the process of liberation lasted years often had more opportunities to build relationships. Major Heymont took it upon himself to help Landsberg refugees not only improve sanitation in the camp, but also encouraged the publication of a camp newspaper in Yiddish, arrange suitable places for families to live together and locate china dinner plates for a communal mess hall. Irving Lisman, an ambulance driver for the 122nd Medical Battalion, had fabric and sewing supplies imported to the Bad Gastein camp so its inhabitants could make neckties, which were a sign of respect. Captain Hagood wrote to his wife requesting lipstick because, he reported, up to 10 women would share one tube, collectively reclaiming their femininity.

Decades after the war, survivors and liberators sought to reconnect. The 1981 International Liberator Conference held in Washington brought together survivors with 100 Allied soldiers from 14 nations who had taken part in the liberation. Following a rise in Holocaust denial in the United States and around the world, the conference’s task was to collect eyewitness accounts. It also provided opportunities for liberators and survivors to share both the immediate and long-term psychological effects of their experiences. “I couldn’t believe the similarity of the psychological effect shared by these men,” wrote Kenneth Colvin, a liberator of the Mauthausen and Ebensee camps. “Each had suppressed his feelings for about 15 years after the war. Then, the pictures and dreams started to dominate our lives. We all relived the horror and helplessness we felt but would not recognize at the time.”

In his opening speech, future Nobel Laureate Elie Wiesel made the liberators recall their first encounter: “You looked and looked. You could not move your gaze away from us. It was as though you sought to alter reality with your eyes. They reflected astonishment, bewilderment, endless pain and anger — yes, anger above all.”

Wiesel and others connected with their liberators, perhaps to provide irrefutable proof that they had regained their humanity. Perhaps to show they had defied the gaze of death. Liberating the camps was more than witnessing and filming a terrifying spectacle. Liberation was not just about saving lives. It was also about humanizing them. “We were strangers to one another,” Wiesel said, addressing the conference attendees. “We might as well have descended from different planets, and yet a link was created between us. A bond was established. We became not only comrades, not only brothers. We became each other’s witnesses.”

Jennifer Orth-Veillon, a freelance writer and university lecturer based in Lyon, France, holds a Ph.D. in comparative literature from Emory University. Between 2016 and 2019, she curated “WWrite: A Blog Exploring WWI’s Influence on Contemporary Writing and Scholarship” for the United States World War I Centennial Commission.