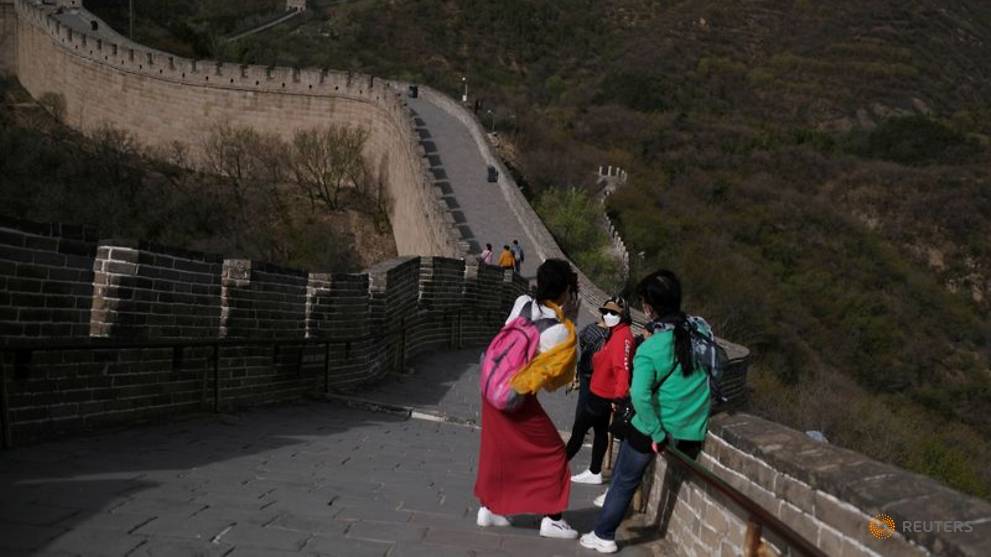 BEIJING: China’s tourists are set to stick close to home and take advantage of discounts as they take time off for the first major holiday since the easing of COVID-19 lockdowns, offering a glimpse of what travel may look like after the epidemic.

A five-day Labour Day holiday from May 1 is being seen as a test for the tourism industry, one of the sectors hardest hit by the coronavirus, which emerged in central China late last year and triggered shutdowns of up to three months.

Travel operator Trip.com estimates about 90 million people will go on holiday for the May Day break, less than half the number who went last year.

But hotels and major travel operators said they were optimistic about presale figures, with Marriott International saying many companies were promoting “staycations”.

Many people were planning to visit places in home provinces or nearby cities, Trip.com said, citing ticket sales.

Half of its presold rooms were for five-star hotels, indicating travellers were seeking better quality accommodation due to epidemic concerns, it said.

They are also taking advantage of cheap domestic flights and hotel deals being offered by airlines and hotel chains eager to get people travelling again.

Prices for popular routes such as Beijing to Sanya, on the southern holiday island of Hainan, have been slashed by up to 90 per cent, with booking on average 30 per cent down, according to Alibaba Group’s travel booking platform Fliggy.

In the financial hub of Shanghai, Marriott is offering guests a 2,202 yuan (US$310) package that includes a one-night stay at its upscale W Hotel, a cocktail and tapas dinner and spa treatments.

Jiang Qin, a 38-year-old Beijing office worker, said she was going away but not too far. She aimed to take her 2-year-old daughter to the nearby city of Tianjin, having scrapped a plan to go to Hainan because of Beijing’s quarantine requirements.

“Tianjin is not the best alternative, but I just want to travel. Anywhere is better than nowhere,” she said.

However, industry executives warn that it too soon to say how robust the recovery in holiday travel will be given concern about a second wave of the coronavirus.

International travel remains out of the question for most, due to border restrictions imposed by other countries, a lack of flights and two weeks of quarantine that await people coming back to China.

Major tourism sites and some restaurants have and been told to limit occupancy to as low as 30 per cent of normal levels, capping any recovery.

The China Tourist Attractions Association estimates that destinations will see an 80 per cent drop in revenue in the first quarter.

“The uncertainties are not completely gone, and no one would be able to tell exactly what will happen,” said Bulley.

“Recovery will continue to come in phases in China, and what we can do is to be fully prepared under the new norm.”

Some small hotels and travel agencies have been forced to shut as the lockdown choked off revenue. Among the most high-profile casualties was Baicheng Travel Agency, which counts deep-pocketed tech giant Alibaba as an investor.

Boutique hotel Fun Deluxe in the Moganshan hill area, a three-hour drive from Shanghai, told Reuters the May Day holiday was giving it some hope of survival, with all of its 29 rooms, which cost up to 2,000 yuan a night, booked.

The hotel had to close in February because of the outbreak and has on average had only one room occupied a night since it reopened on Mar 6 – “not enough to pay our cleaning staff”, said the hotel’s service manager who gave her surname as Zhu.

“The income during May Day is vital,” Zhu said.

“We really hope business will get back to normal after May Day.”