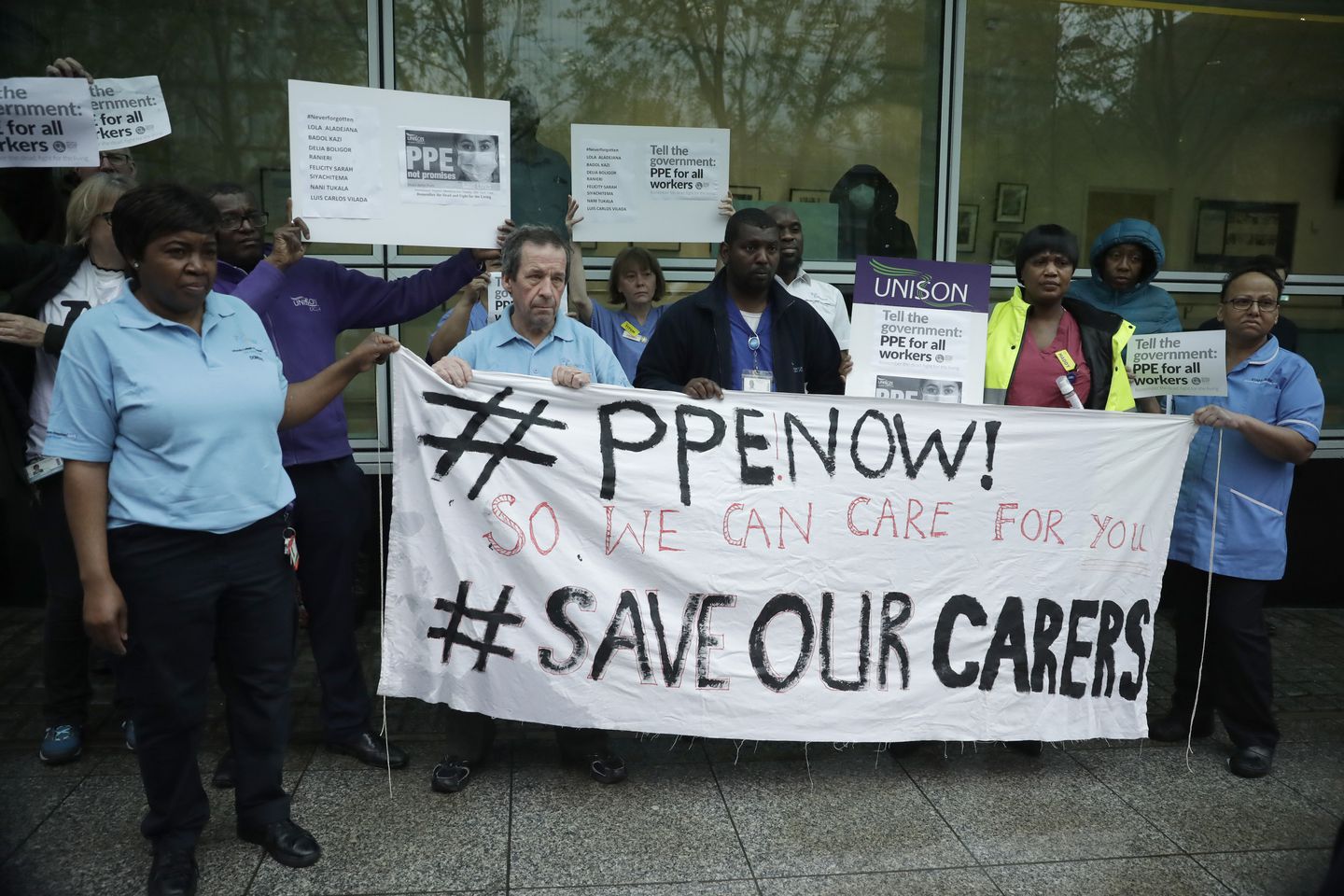 The government says 82 health-care workers and 16 nursing home and social-care workers have died of covid-19, the disease caused by the coronavirus. One website run by nurses says at least 140 have died.

Health secretary Matt Hancock was grilled Tuesday about the government’s failure on PPE. During an interview with Hancock on LBC radio, the son of a doctor called in.

Intisar Chowdhury, 18, wanted to know whether Hancock personally regretted not taking seriously enough his father’s warnings about the PPE shortages.

Chowdhury’s father, Abdul Mabud Chowdhury, a doctor who worked at a hospital in east London, died of covid-19. Days before he was admitted to a hospital after falling sick, the older Chowdhury had publicly urged the prime minister to get front-line health workers the protective equipment they needed.

Hancock told the younger Chowdhury that he was “really sorry” about his father’s death and that “we took very, very seriously what your father said, and we’ve been working round-the-clock to ensure that there’s enough protective equipment.”

The health secretary this month promised a “herculean effort” to deliver personal protective equipment (PPE) where needed. He also said, “There’s enough PPE to go around, but only if it’s used in line with our guidance.”

Hancock suggested at the time that health-care workers might be wasting gowns and masks — wearing them only once, when they could be used to treat several patients. “We need everyone to treat PPE like the precious resource that it is,” he said. “That means only using it when there’s a clinical need and not using more than is needed.”

At a Downing Street news conference Tuesday, Hancock said: “We’ve been moving heaven and earth to get the amount of PPE we need to the front line, both buying it from abroad and also then distributing it. That system is getting stronger all the time, but it is a mammoth effort to do it,” especially because there is a shortage of PPE globally.

Hancock also noted that “a whole host of factories here in the U.K. are turning over their production towards PPE.”

The British Medical Association, the main doctors union, has repeatedly expressed concerns about the lack of protective equipment, with stocks of long-sleeved disposable gowns of particular concern.

Chaand Nagpaul, chair of the union, said the situation was “extremely variable,” with some hospitals reporting enough supplies, while others “literally have been on their last supplies and have had to get emergency supplies overnight to get by. Our worry is you cannot have an NHS that functions on a day-by-day level of uncertainty.”

In addition, he said, the majority of doctor practices don’t have eye protection. Instead, he said, they were relying on schools and local businesses donating face shields and goggles.

British media outlets have said that Johnson’s first meetings back at 10 Downing Street since his vicious bout with the virus have been dominated by the government’s scramble to provide more PPE where needed.

At 11 a.m. Tuesday, the country paused for a minute’s silence to commemorate the key workers who have died in the coronavirus fight. The prime minister joined the tribute.

On Monday, Hancock announced that the families of health-care workers who die on the front line will receive a payment of 60,000 pounds, or around $74,600.

Asked about the money in a separate interview, the son of the dead doctor, Chowdhury, said, “If I’m being honest, rather than the 60k for my family, I would rather the efforts go into giving more PPE to NHS.”

In its investigation, the BBC reported that Britain’s stockpile, which was created in 2009, did not include vital items in its disaster preparation kit and that the government ignored warnings to purchase missing equipment.

Last week, doctors and nurses unions criticized the government over an update to its clinical guidance that suggested that health-care staff reuse protective equipment and wear plastic aprons if necessary.

The government also has been criticized for the low number of tests for health-care workers and the public, and the soaring numbers of deaths in nursing homes.

Figures from the Office for National Statistics published Monday showed that a third of all coronavirus-related deaths in England and Wales are happening at nursing homes.

The figures differ from the tally given by the government’s health department, which includes only deaths in hospitals

Michael Gove, a senior politician in the Conservative Party, told lawmakers Monday that the numbers were “deeply concerning. The coronavirus pandemic has affected our communities. We’ve had outbreaks in hospitals and particularly distressing outbreaks in care homes.”

Jennifer Hassan contributed to this report.