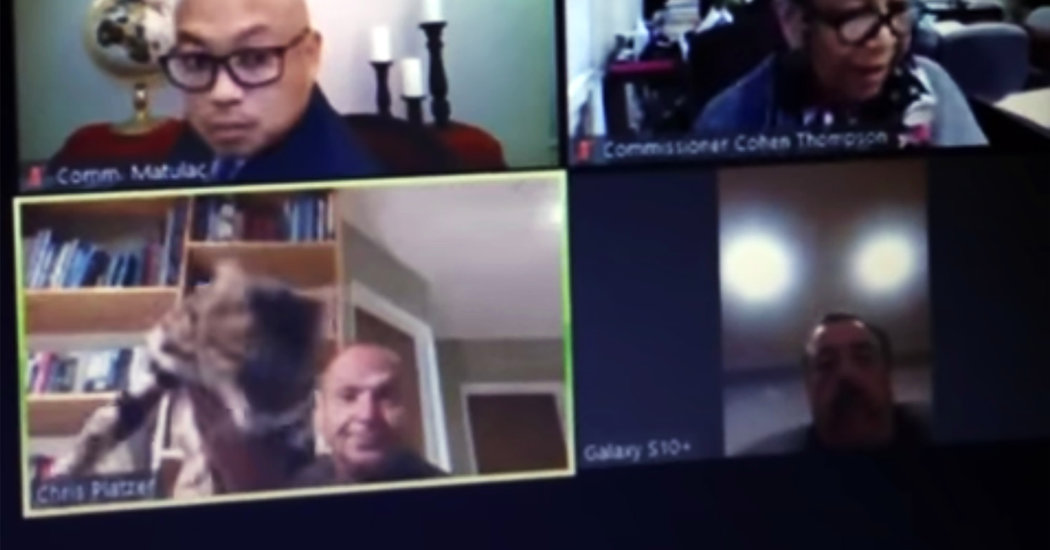 The city Planning Commission meeting in Vallejo, Calif., last week followed the same humdrum pattern of so many municipal meetings: There was the Pledge of Allegiance and a roll call, followed by various reports.

That posed the usual challenges: Commissioners with microphones muted when they were trying to be heard, some of them appearing half offscreen at times or talking over one another.

But things took an unexpected turn about 2 hours and 24 minutes into the session after one of the commissioners, Chris Platzer, was asked if he had any comments after reviewing a project application.

“Yes, this is the section where you can, Commissioner Platzer,” the commission’s chairman said.

The cat meowed loudly again. “OK, first, I’d like to introduce my cat,” Mr. Platzer said, lifting it close to the camera and then, with two hands, tossing it off screen.

The cat squeaked as it was being thrown, and a thud could be heard.

One commissioner on the videoconference put his hands to his forehead and covered his eyes in response.

The meeting concluded 26 minutes later, but that was hardly the end of it.

Bob Sampayan, the mayor of Vallejo, which is about 30 miles north of San Francisco, and Robert McConnell, a City Council member and the liaison to the commission, have asked for the council to consider Mr. Platzer’s immediate removal at a meeting on Tuesday, a city spokeswoman, Christina Lee, said on Monday.

After the planning meeting adjourned, Mr. Platzer was heard using expletives, she said, adding that the mayor and Mr. McConnell discussed his behavior immediately after the episode and called for his removal within 48 hours.

Stephanie Bell, senior director of cruelty casework for People for the Ethical Treatment of Animals, said the group was prepared to place the cat “in an understanding, loving home” if Mr. Platzer’s “lack of patience or understanding” made cat guardianship inappropriate.

“The cats in our care rely on us for everything, including food, respect and affection, and no one should ever punish them for seeking our attention,” she said. “While cats are known for agility, this cat was thrown and could have slammed into furniture, the wall or the ground.”

As of Monday morning, the city had not received a formal resignation from Mr. Platzer, Ms. Lee said; however, The Times-Herald of Vallejo reported on Saturday that it had received an email from him suggesting that he was stepping down.

Mr. Platzer, who could not be reached on Monday, was appointed to the volunteer position in August 2016 and his term was set to expire in June.

“I did not conduct myself in the Zoom meeting in a manner befitting of a planning commissioner and apologize for any harm I may have inflicted,” he wrote in the email, The Times-Herald reported. “I serve at the pleasure of the council and no longer have that trust and backing.”

He added, “We are all living in uncertain times and I certainly, like many of you, am adjusting to a new normalcy.”

The Zoom episode was one of the latest to surface as officials adjust to remote working. In Florida, a judge this month admonished lawyers for getting too lax in their dress during their videoconference court appearances.