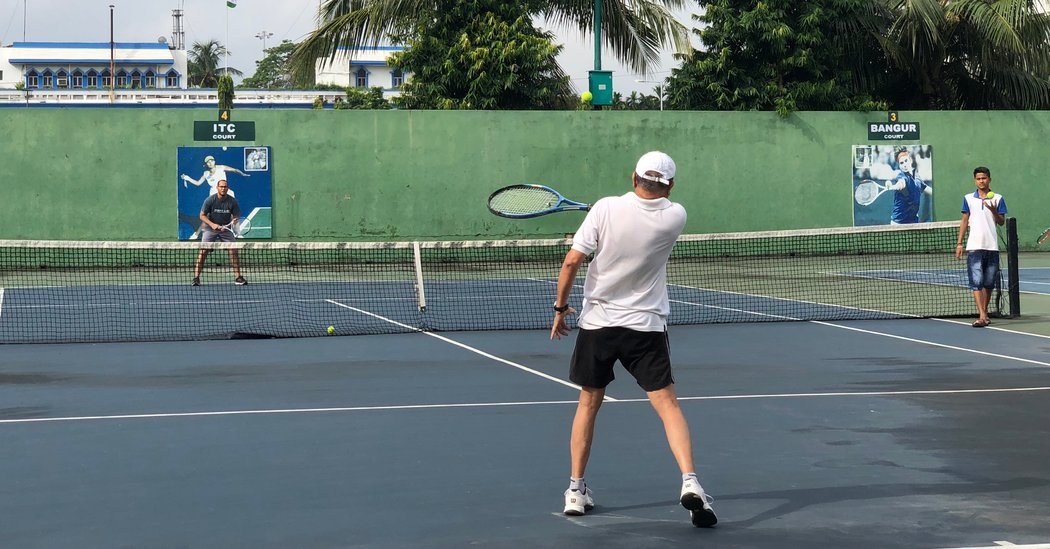 Most of my childhood friends from our predominantly white New Jersey suburb have a story about how their love of sports began — usually involving their fathers. Shaun’s played catch with him for hours in the backyard and took him to baseball card shows, hence Shaun’s love of baseball. Matt’s brought him up watching Knicks games in the basement, so Matt loved basketball.

Not me, though. I had to find another way in. My father, Shyamal Kanti Deb, emigrated to the United States from India in 1975 and never cared for sports. He never understood any of it. I began watching games on television, usually by myself or with my older brother, Sattik. Or sometimes at a friend’s house with their dad. My earliest sports memory is being wowed by a rookie basketball player in 1996 named Antoine Walker, who played for the Boston Celtics. Something clicked, and I became a lifelong Celtics fan at age 8.

As I found my way into sports fandom, resentment for my father grew. I was jealous of the Shauns and the Matts of the world. Several of my classmates had fathers who were coaches of whatever team sport they were playing. It felt like every other kid had bonded with their father over a shared passion for athletics, and I hadn’t found a way to bond with my father at all. Clearly, it was serious: I was jealous of Matt getting to watch the Knicks with his father.

An electrical engineer by trade, Shyamal’s idea of a fun night was memorizing the periodic table, which would make perfect sense if you could see him hunched over the kitchen table in his thick, horn-rimmed glasses. He has always been an academic, wowed by calculus and physics, rather than dunks and home runs. The idea of playing catch with me was foreign to him. Shyamal didn’t know the basic rules of, well, any sport, except maybe soccer, which he played some growing up, and cricket, which is as essential to living life in India as oxygen. Like many South Asian parents of his generation living in the United States, his focus was on survival and trying to get to the next day. On behalf of their children, it was on professional and scholastic pursuits. Anything else was a distraction.

Even though we never discussed it, he knew that I looked longingly at my friends’ fathers. And he tried — in his own awkward way — to bridge the gap between him and his American son. One time, when I was about 12, he came to one of my Little League games, armed with a brand-new point-and-shoot camera. My mother had signed me up for baseball — not because I loved playing, but in the hope it would help me develop the focus I needed to get good grades.

It was my turn to bat. I promptly struck out — as usual. But my mild disappointment shifted quickly to horror as I looked up at the stands on my way back to the dugout. My father was clapping wildly at my strikeout and taking pictures. His son, as he understood it, had not had to endure the punishment of running around this diamond-shaped field, which he took to be a major victory. (By this standard, I was Babe Ruth.)

Adding to the chasm between us was the toxic arranged marriage that my Bengali parents found themselves in for 30 years before finally divorcing when I was in high school. There was no warmth between my parents to blossom into warmth toward their children. After the divorce, our short, stilted conversations became less frequent.

The door seemed to fully close on our relationship when, during my freshman year of college, my father moved back to India permanently and without warning. We didn’t see each other again for more than 11 years. By my 30th birthday, he was little more than a distant footnote from my past. Still, the lack of a bond had continued to gnaw at me, and I decided I couldn’t let him pass away without giving our relationship another chance — away from the tensions of my childhood home.

Really, it would be our first chance.

In summer 2018, I traveled to India for the first time with my then-girlfriend (now fiancée), Wesley, to see him again. Expecting a frail old man in his late 70s, I was shocked to see a fit, vibrant man striding toward us outside the Kolkata airport. He had as much hair as I did, and exuded life in a way he hadn’t before.

He had decided to fill his remaining years in Kolkata with all the activities he hadn’t pursued in his “money-hunting days in America,” he told me. And that included, much to my surprise, a variety of sports. He played tennis three times a week and had a coach. He was a golfer and a runner. He had taken up yoga. His arms looked toned.

I was still wary of him, not yet understanding why he had left the United States so abruptly. We sat and talked for the first time in my life, opening ourselves up to hard conversations that would prove cathartic for us both. We shared a beer for the first time. But an opportunity to bond with him over sports was not something I could pass up, and shortly before our time in Kolkata ended, I challenged him to a tennis match.

He was going to kick my butt. I hadn’t swung a racket in 20 years. Yet I wanted to do this for Shyamal: to give him the opportunity to be a father who played sports with his son. If I am being honest, I wanted that for me too.

“Oh boy, I’ll tell you, Sopan. I’m thrilled that I’ll play tennis with you,” Shyamal exclaimed gleefully, followed by his crisp chortle. He kept saying, “This is the dream of my life!”

“I’m not very good,” I said cautiously. “I haven’t played in many years.”

“To play with your father, you don’t have to be any good,” Shyamal said. “I’m not good either.”

He was being nice.

When I woke up at the crack of dawn the next day to prepare for our match, I didn’t have high hopes. But, even though Shyamal was about to win handily, this was about showing up.

My father fretted over the weather, but it was perfectly sunny when we arrived at the courts. He wore a white polo shirt and a matching baseball cap. He had rented a racket for me and hired a ball boy for our game. We took our places on opposite sides of the court and began.

My forehands, if you could call them that, sent the tennis ball flying well outside the lines. Every couple of minutes, I’d put my hands up to signal “My bad!” which should have been “I am bad!” I was swinging my racket like a baseball bat. The poor ball boy was sweating profusely as he chased after all my errant swings.

There was one other issue, though: Shyamal was terrible too. Really bad. I mean, so was I, but I had an excuse. This was not a grand display of tennis on either side. This was the opposite of Borg vs. McEnroe. It was more like two Muppets facing off. I stopped feeling bad for the ball boy once I saw him openly laughing at some of our volleys. Shyamal trotted from one side of the court to the other, flailing at my serves, which were surprising each time they made it over the net.

I had thought he was being polite by playing down his tennis skills. He actually was terrible. What was his coach teaching him that whole time?

After an hour, we mercifully ended our eyesore of a match. Neither of us kept score, but we didn’t need to. We both lost.

“If you’re out of practice, your focus is not right,” Shyamal said as we walked back to my hotel, to which I laughed. He was still beaming with pride. “Initially, the ball was going South Pole and North Pole. As you started playing, you’re getting the grip back.”

If this journey was about searching for answers, I got the most concrete one that morning: Why wasn’t I good at sports? It was in the Deb family blood. Or, rather, that talent wasn’t.

We left Kolkata the next day, but that humid, happy morning stayed with me. At least once, Shyamal got to be the dad to me that Shaun and Matt’s were for them, instead of just my father. It hadn’t been too late for us to find common ground on the clay court. As my father would say, this was the dream of my life.

Sopan Deb is the author of “Missed Translations: Meeting The Immigrant Parents Who Raised Me” from which this essay is adapted.