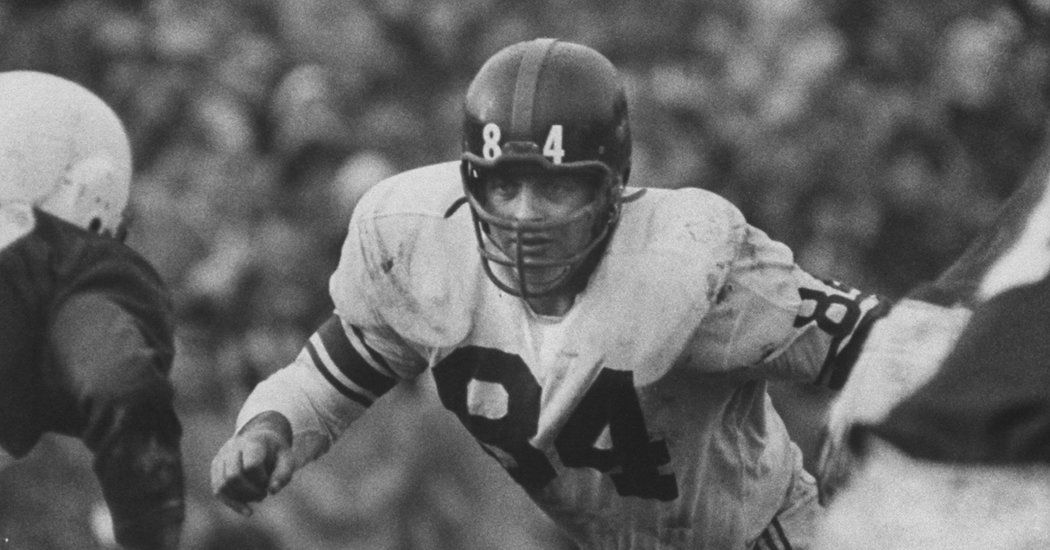 Harland Svare, who played linebacker in the celebrated defense that helped take the Giants to three N.F.L. championship games in the 1950s and became, at the time, the youngest head coach in the N.F.L.’s modern history when the Los Angeles Rams hired him in 1962, died on April 4 at a nursing home in Steamboat Springs, Colo. He was 89.

Svare’s death was confirmed on Monday by the Yampa Valley Funeral Home in Steamboat Springs. His son-in-law, Cory Anderson, said that the cause was listed as respiratory arrest, although he had tested negative for the coronavirus.

Playing for eight pro seasons, his first two with the Rams before joining the Giants in 1955, Svare was acclaimed for his football smarts at a time when shouts of “Dee-fense!” cascaded from the stands at Yankee Stadium, the Giants’ home field.

Svare played in an innovative alignment installed by Tom Landry, the Giants’ defensive coach, with four down linemen in place of the customary five- or six-men lines, a strategy to stymie the growing emphasis on the short passing game.

Lining up at left linebacker, Svare was positioned alongside Sam Huff, the middle linebacker, whose ferocious tackling, portrayed in the CBS documentary “The Violent World of Sam Huff,” came to glamorize defensive play.

The Giants routed the Chicago Bears, 47-7, in the 1956 N.F.L. championship game, then lost to the Baltimore Colts in the memorable 1958 sudden-death overtime title game and again in 1959.

At 6 feet tall and 215 pounds or so, Svare was relatively undersized even for a linebacker of his time.

“Svare didn’t have a muscle in his body, but he possessed remarkable intensity,” Frank Gifford, the Giants’ Hall of Fame back, recalled in “The Whole Ten Yards” (1994), a memoir written with Harry Waters Jr.

Svare became the Giants’ defensive coach in 1960 even while continuing to play, after Landry had left to become head coach of the expansion Dallas Cowboys. He retired as a player but remained the defensive coach under Allie Sherman when Sherman succeeded Jim Lee Howell as the Giants’ head coach in 1961. The Giants again went to an N.F.L. title game that season, losing to the Green Bay Packers. Svare left afterward to join the Rams as defensive line coach.

He was named the head coach of a losing Rams team midway through the 1962 season without any head-coaching experience at the college or pro level. At 31 years, 11 months old, he became the youngest head coach in the National Football League’s modern era, a distinction that has twice been eclipsed, by Lane Kiffin (31 years, 8 months), who was hired to lead the Oakland Raiders in 2007, and by Sean McVay, who holds the record as the youngest (30 year, 11 months), when he was named by the Rams in 2017.

Svare’s Rams went 0-5-1 for the remainder of the 1962 season, then posted losing records over the next three years. Svare was fired with a coaching record of 14-31-3.

He was the Giants’ defensive coach again in 1967 and 1968, then joined the Washington Redskins in 1969, overseeing their defense under Coach Vince Lombardi, the former Giants’ offensive coordinator who had forged a Packer dynasty. Lombardi died of cancer in the summer of 1970, and Svare was out of a coaching job again.

But he was hired by the floundering San Diego Chargers as their general manager in February 1971, replacing Sid Gillman, who remained as head coach.

Svare took over the coaching as well late in the 1971 season, his Chargers going 2-2 under him.

In November 1972, the Chargers’ owner, Eugene Klein, startled their fans when he gave Svare a new five-year coaching contract, though the team was continuing its losing ways. The Chargers finished that season at 4-9-1.

The 1973 Chargers were at 1-6-1 when Svare resigned as coach, his teams having gone 7-17-2. After that season, the N.F.L. levied a total of $40,000 in fines against eight Charger players as well as Klein and Svare. The players were found to have possessed drugs, and Svare and Klein were penalized for lax oversight. The league did not disclose the nature of the drugs, but Svare said marijuana use was involved. At least one of the fined players said, however, that he had used amphetamines.

Svare was fired as general manager in January 1976.

Harland James Svare was born on Nov. 15, 1930, in Clarkfield, Minn., in the rural southwest part of the state. His father, Rolf, and his mother, Inga (Niebokken) Svare, were farmers. He was a lineman at Washington State and was selected by the Rams in the 17th round of the 1953 N.F.L. draft.

Since he came from a state with a large Scandinavian population, he became known as Swede Svare, which was presumably pleasing on the tongue, although he was of Norwegian descent.

Svare had nine career pass interceptions, one for a 70-yard touchdown run, and recovered five fumbles. He blocked a late Detroit Lions field-goal attempt to preserve a 19-17 victory leading to the Giants’ overtaking the Cleveland Browns to reach the 1958 N.F.L. championship game. He was named a second-team All-Pro by United Press International that season.

After leaving football, he founded an institute devoted to physical therapy and promotion of good health habits.

Svare is survived by his daughter, Mia Anderson; two granddaughters; and a brother, known as G.O. His wife, Annette (Colangelo) Svare, whom he met when she was the personal secretary to the Giants’ owner, Wellington Mara, died in 2008.

Reflecting on his time as a head coach, Svare felt that he hadn’t been properly prepared despite his knowledge of the X’s and O’s.

“I know I was old enough at 31 to handle the football problems,” he told The Los Angeles Times in 1992. “But I also know that I didn’t handle people well at all. I was immature. I was inconsistent, too inconsistent.

“Nobody likes to be criticized,” he continued, “but unless their faults are pointed out to them every time, football players just don’t develop, regardless of how much talent they have.”

As for how he should have behaved: “I’d be a tough guy with a warm heart.”