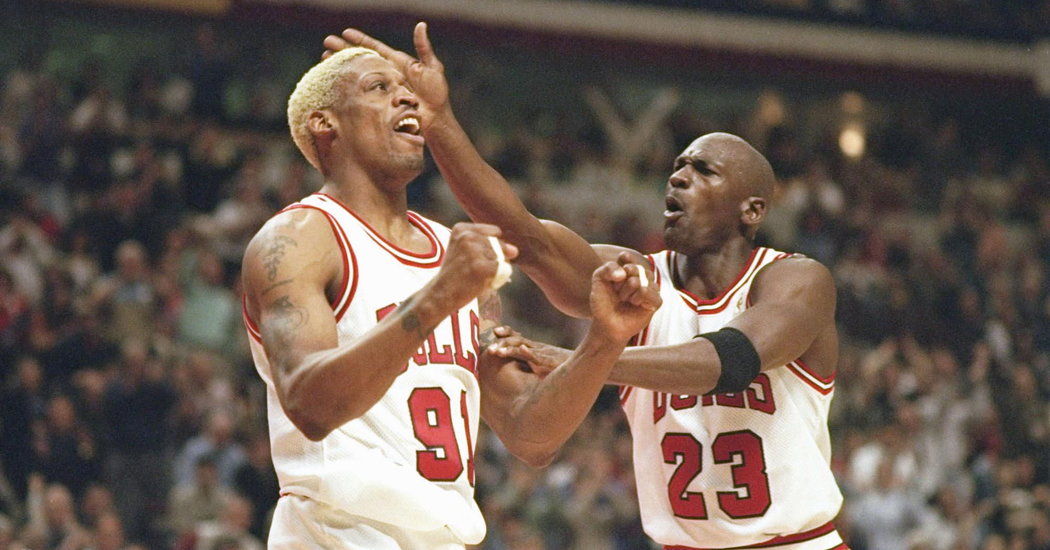 The telephone calls from reporters and television producers are more sporadic now. But Lonn Reisman still hears from people who want to know more about Dennis Rodman, and that has been the case again thanks to “The Last Dance,” ESPN’s 10-part documentary series on Michael Jordan’s final season with the Chicago Bulls.

Two more episodes aired on Sunday night, and Rodman — Jordan’s teammate for three championship seasons — had a star turn in all his multicolored glory. For a sports-starved audience, the series has offered a reminder of Rodman’s basketball genius: part rebounding savant, part defensive menace, part provocateur.

“I give a lot of credit to Michael Jordan and Scottie Pippen and Phil Jackson, especially, because Phil was a psychologist,” Reisman said in a telephone interview. “But what Dennis brought to that team was glue. He played his role as hard as anyone could possibly play it.”

Reisman, 65, is the vice president for intercollegiate athletics at Tarleton State in Stephenville, Texas. In 30 seasons as the men’s basketball coach before he was succeeded by his son in 2018, he won 654 games. But Reisman also understands something else about his legacy: that it will always be tied to Rodman.

In 1982, Reisman was an assistant coach at Southeastern Oklahoma State, an N.A.I.A. program in Durant, Okla., when he heard about a lanky forward who was demolishing opponents for Cooke County College, a two-year school in Gainesville, Texas, that is now called North Central Texas College. Reisman made the drive south to take in a practice, and that was when he saw Rodman for the first time.

“Oh, we probably can’t get this guy,” Reisman recalled telling himself. “But you always dream about it. He was raw but very athletic and he had a motor that I had not seen.”

A few weeks later, Reisman returned to Cooke County to watch Rodman play in a game — or at least that was the plan. Rodman was nowhere to be found. Reisman was informed that Rodman had left school and returned home to Dallas. The problem for Reisman was that school officials, citing privacy issues, declined to give him Rodman’s phone number.

“So I kept calling the school,” Reisman said, “and finally, one day, I got a student on the phone. I said: ‘I really need to talk to this young man. We’re trying to give him a scholarship, and I think it would be beneficial for his life.’ And she gave me his phone number. When you’re young and you’re a recruiter, persistence is the No. 1 thing you need.”

“He opened the door, and I don’t know what it was, but we just had an instant connection,” Reisman said. “You have that with some recruits.”

That same afternoon, Reisman left to head back to Southeastern Oklahoma State — with Rodman riding shotgun. They wound up playing H-O-R-S-E in the school gymnasium, Reisman said, then sat together in the bleachers for a quiet conversation. Reisman told Rodman that he had a tremendous amount of talent.

“Do you really think so?” Reisman recalled Rodman asking him.

Reisman soon persuaded Rodman to stick around. After cluttering the box score in his first game, Rodman told Reisman that he hoped he had not disappointed him.

“I hope you disappoint me every night,” Reisman recalled telling him.

And when Reisman broke the news to Rodman that he had been named an N.A.I.A. all-American after his sophomore season — the first of three straight selections — Rodman was taken aback: What was an all-American? Reisman had to explain that it meant he was one of the top players in the country.

In the N.B.A., Rodman could be maddening, distracting and exhausting for opponents and teammates alike. The ESPN documentary touched on the notorious midseason vacation that Rodman took to Las Vegas, where he appeared to indulge in all the various excesses that befitted his playboy lifestyle while the Bulls plodded along without him. But then he returned — miraculously — in tiptop shape, according to Jordan. It was as if Rodman’s Sin City sabbatical had never happened. It was another feat in a career full of them.

But it also served as an example of how Rodman’s eccentric personality often overshadowed his greatness as a player. And his greatness was the result of an approach that ran counter to the popular narrative that he helped stoke: He worked incredibly hard. He was a blue-collar welder who merely dressed as if he had tickets to Comic-Con.

When Rodman was playing for the Detroit Pistons, Reisman introduced himself to Chuck Daly, the team’s coach.

“Lonn,” Reisman recalled Daly telling him, “this guy is as fast as a Ferrari and he never runs out of gas.”

Coaches would tell Reisman about Rodman playing 40 minutes — and then riding an exercise bike for an hour after the win.

But Rodman was no basketball-playing robot. He was altogether human, which was part of his appeal. He would make mistakes. He would cry. So much feeling always seemed to be simmering at the surface.

Even in retirement, Rodman has been uniquely unconventional — and no stranger to controversy. Reisman himself referenced some of the things that Rodman had done “politically,” an oblique nod to Rodman’s friendship with Kim Jong-un, the North Korean leader. Rodman made several trips to North Korea in recent years, selling them as a way of building diplomacy.

When reports surfaced last week that Kim was ailing, Rodman told TMZ that he was praying for him.

Reisman has kept in touch with Rodman, though he can be tough to track down.

“He doesn’t sit still, I promise you,” Reisman said.

But Rodman always struck Reisman as someone who cared: about people, about his friends. When Rodman was enshrined in the Basketball Hall of Fame in 2011, Reisman was the first person he thanked.

“It brought tears to my eyes,” Reisman said, “that he hadn’t forgotten about me.”