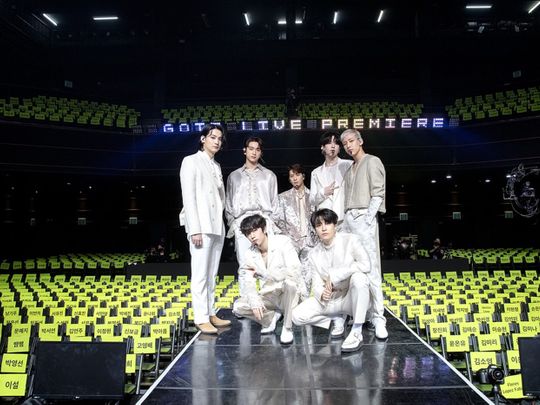 GOT7 charted high on the UAE iTunes chart with their latest comeback once again.

Last Monday, JYP Entertainment’s talented septet hit the music scene with brand new EP, ‘Dye’, showcasing a whole new style with their romanticism, medieval ballad concept. As expected, it took local fans over the moon as their music made an appearance on the local iTunes chart.

Their new musical offering debuted on the top of the all-genre, pop and K-Pop albums chart on its release date. ‘Dye’ also reportedly managed to take the number one spot in 39 other countries.

Expressing a vow of unchanging love, the heart-rendering pop title track, ‘Not By The Moon’, which was revealed to have been partly written, composed, and arranged by JYP Entertainment founder chief producer, Park Jin-young, landed on the second spot right after BTS’s ‘Inner Child’ on the iTunes Top Songs chart.

In addition to this, their enchanting ‘Not By The Moon’ music video hit 20 million video as of April 23, the band confirmed on their official Facebook page.

GOT7’s music always manages to dominate the local iTunes chart. Their previous 2019 EP’s ‘Call My Name’ and ‘Spinning Top: Between Security & Insecurity’ are no different.

Much like their previous discographies, the GOT7 members — consisting of Jinyoung, Mark, BamBam, Jackson, Youngjae, JB, and Yugyeom — participated in the production of the new album of which includes tracks like ‘Crazy’, ‘Love You Better’, Aura’ and ‘Trust My Love’.

It’s GOT7’s first music release for the year since EP ‘Call My Name’ in November. Joining other K-Pop groups, GOT7 also launched their own TikTok account on their comeback day to connect with fans.