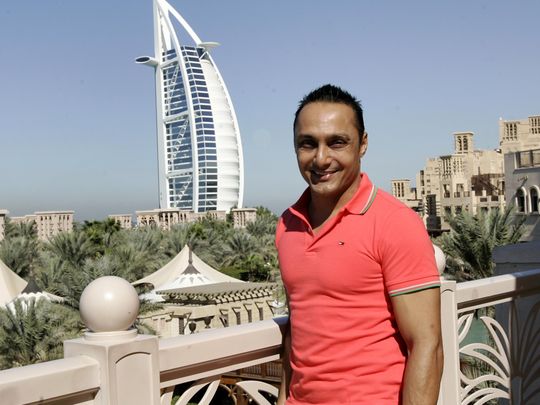 In the wake of the coronavirus contagion and with more than 90 countries in quarantine, there’s another debilitating casualty: women who get battered and bruised after they are forced to be home with their abusers for an extended period of time.

These domestic abuse victims — trapped inside four walls and with no communication to the outside world — have no escape. But Indian actor and activist Rahul Bose has his finger firmly on the pulse of that ‘shadow pandemic’ — the rising violence against women during COVID-19.

On April 20, Bose — known for his cerebral personality and powerful, anglophile roles — used his celebrity and clout to put together a star-fuelled video in which a galaxy of Bollywood actors, including Anushka Sharma, Madhuri Dixit-Nene, Farhan Akhtar, Nandita Das, Vidya Balan, Karan Johar and Dia Mirza, urged their fans to report cases of domestic abuse.

The one-minute video titled ‘Lockdown on Domestic Violence’, also featuring Bose, proved to be a powerful reminder for everyone to take a firm stand against domestic violence.

The video, an initiative of NGO Akshara Centre, Special Cell For Women and Children and Government of Maharashtra, gained momentum when Bose — a committed activist — gathered his Bollywood friends for a good cause. The video, since its release on April 20, has been widely shared by celebrities and their fans with millions clicking on the video.

“They were not just giving lip-service here. The celebrities that you see in our video were really invested in the cause and understood the gravity of the issue. For instance, director Zoya Akhtar is not in the campaign, but she personally reached out and spoke to Madhuriji and got her on-board,” said Bose in an exclusive interview over the phone.

The National Commission For Women record shows up to 257 cases of domestic abuse being reported in the first week of April in India alone and it has been reported that globally there’s been a surge in domestic violence cases with hotlines lighting up relentlessly.

Excerpts from our exclusive interview over the phone with Bose and Nandita Shah, Akshara Centre’s co-director…

What were your thoughts when this proposal for a video to raise awareness towards domestic violence came to you?

In any calamity — man-made or natural — it is the women are always at a disadvantage. If it’s a massive calamity, they are often left homeless and they fall prey to violent forces. They become financially destitute too. During a pandemic like the one we are facing, a lot of women face domestic abuse. The occurrence of abuse increases dramatically during times like these. This is happening all over the world. So when Nandita [Shah, co-director of Akshara Centre] asked me, I was happy to be a part of it. I think my contribution to this campaign is not so much intellectual, as it is artistic and creative. I offered to speak to a few people who would hopefully join this campaign and nobody said no.

Virat [Kohli, cricketer], Anushka [Sharma], Farhan [Akhtar], Karan [Johar], Madhuriji [Dixit], Dia [Mirza] and just about everybody said ‘yes’. Nandita and I went through the script and once everybody was happy with it, I sent it to everyone. Even Sachin Tendulkar, Shabana Azmi, Nandita Das didn’t say ‘no’. They just recorded what they had to say and this whole campaign was born. We had a huge backing from the government of Maharashtra driven by Aditya Thackeray. He supported us actively. There were three big contributors to this campaign including the Maharashtra government, Akshara Centre and all those celebrities who helped us bring attention to the cause.

Bollywood stars are known to live in their insular privileged world and many are sceptical about their charitable efforts. Your thoughts…

This campaign got millions of hits and its reach shows that the celebrities genuinely believe in that cause. And if they are earnest, then people automatically respond to their genuineness and their depth of feeling … This video was always going to be timely. There is always going to be domestic violence and our campaign underlines that the government [of Maharashtra] has understood it too. It’s not just about pandemic or covid-19 testing alone. There are other issues involved too … And remember, there are different ways to alleviate pain. Somebody might donate Rs100 million or somebody might read to the visually challenged one hour a week and somebody might work on a campaign like domestic violence. There are different ways in which you can help and no one way is superior to the other. There cannot be any kind hierarchy of what is more important or what is less important. Everything and everyone has to work together.

So we shouldn’t judge ideally…

Everybody in the chain has a part to play. If a loaf of bread reaches your house today, is the farmer more important or the guy who drove your loaf of bread from the factory to your home more important? We have a tendency to make things into hierarchy and that time has gone. Now we realise that the people we thought didn’t matter, matter so much for our daily existence. I love what is emerging out of this pandemic. People are now beginning to see those invisible faces. Before this pandemic, would you have remembered your grocer or milkman’s face? But now it’s a face you will never forget. This pandemic is making every single face visible because we now know how interconnected we are.

Can a woman outside India who is trouble call your number for help?

No. This is a government of Maharashtra initiative. The support service are only for women in Maharashtra. We are hoping that other states in India and beyond would pick it up and highlight this issue. This is our silent hope. We don’t have the power to work on it nationally. We are only working with the government that we know.

What were your challenges while putting together this campaign?

Pandemic or no pandemic, there are some issues that will always require a strong civil society support towards their campaigns … So we have two choices: the first option is to ignore it or feel beaten down by it and the other is to keep hammering away at what seems to be an insurmountable problem. In a country like India, the numbers are staggering. So when you are confronted with those formidable numbers, you can either lose heart saying there’s no hope for this country or keep chipping away till you see change. The change that we aspire and dream for may be not in our lifetime, but one day the change shall occur where the growth of domestic violence comes down. And that’s what I hope for.

Nandita Shah, the co-director Akshara Centre and activist, gender trainer and writer, on …

On the challenges faced for ‘Lockdown On Violence’ campaign:

“None of the stars asked us ‘why now’. And when we approached the government we found that there was a positive response where they said they will take action and that is shouldn’t happen in our state. So I think the issue was only really the challenge that we were facing was how do we create a back-end and how do we not over-burden the existing machinery and still be able to respond to violence against women. This campaign featuring Bollywood stars is an entirely pro-bono effort by everybody.”

Who prodded awake the activist in Rahul Bose?

“2002 is when I dipped my toe into the world of social service with Askhara Centre. They used to call me to counsel 80 to 100 of their women who were poor and from very orthodox, patriarchal, caste-bound, religion-bound families … These women had to fight to leave their homes to come to the centre to meet me.

Back then, we talked about their problems, their frustrations and I would sit with them and we would actually found 2 or 3 ways on how to gradually change the patriarchal system. We spoke about how to gradually expand their availability of open spaces and trigger dialogue. While I feel I didn’t make much difference, I understood the work that Akshara did and how important it is.

Nothing matters in this world if you don’t succeed in reducing pain. Any thing you do or any cause you back, if it doesn’t translate to lessening pain, then it’s of no use.