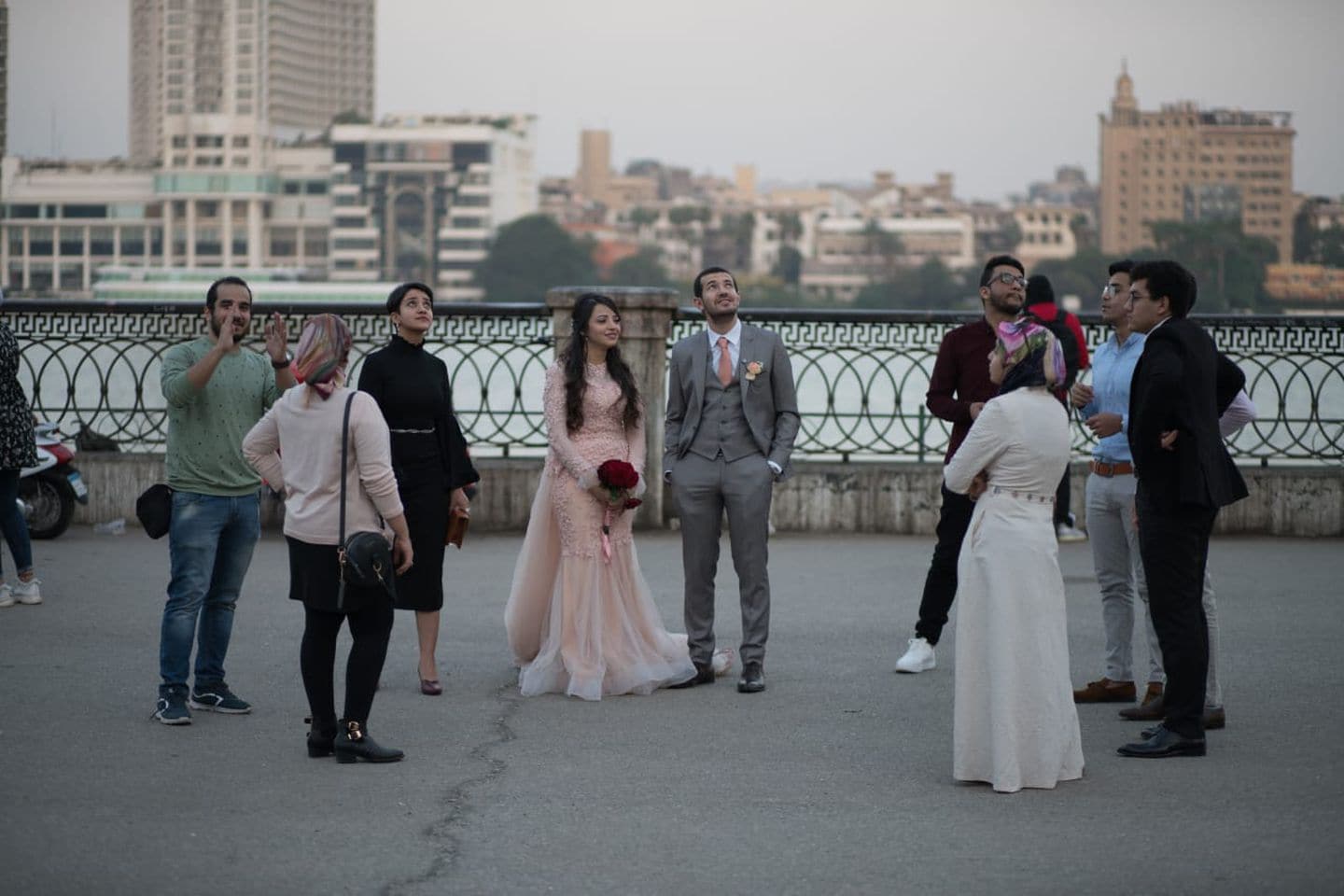 Across the world, the epidemic has forced the postponement of countless weddings, which are top social events of the year in many traditional societies. But some couples are somehow still finding a way to tie the knot — because they just can’t wait or are convinced it’s now or never.

“I read a lot about the deteriorating situation in Italy, the number of total deaths every day, I was terrified,” Taweel recalled. “I woke [my partner] up in the middle of night telling him, ‘If the world is about to end, we have to hurry up to live some days together first,’ and he super agreed.”

After the Nile engagement earlier this month, everyone hurried home to their Cairo apartments ahead of curfew to video chat on Zoom with those who could not attend. The couple hopes to be married in a few months. Somehow.

“We didn’t care a lot about the ceremony. It was about us, me and him and our need to be together,” she said.

Many governments have recognized the risk of the virus spreading during weddings and moved quickly to close down weddings halls and ban gatherings. In a tragic case in Morocco, just days before a lockdown was declared, a wedding in the country’s tiny Jewish community and its celebration of the Purim festival resulted in dozens of infections and 12 deaths from the coronavirus.

In Dubai, the glitzy Persian Gulf emirate known for its high-end lifestyle that even promotes wedding tourism, the industry has been devastated. A multitude of weddings have been postponed and there is little idea of when they can resume.

“Honestly for us, in the events business, we will be the last ones coming back,” lamented wedding planner Stefanie Heller, who had to refund five couples this month who either canceled or postponed their weddings.

Authorities in the United Arab Emirates suspended weddings and divorces to keep people out of government offices, but then, in apparent recognition of a need, they instituted online Muslim marriages. A wedding license can be obtained from the Ministry of Justice website and then a date will be set for a video conference with an imam reciting the Koran. On Sunday, the government announced that a couple from Abu Dhabi, the capital, had become the first to use the service and be married via Zoom.

Yet it is not the ceremony that everyone remembers but the party with friends and family from all over. With this in mind, Indian couple Preet Singh and Neet Kaur decided to conduct their whole wedding party online; the bride and groom were not even in the same city.

The couple abandoned their plans for a series of wedding events in Mumbai, stretching across several days and three venues with 150 guests flying in from Australia, Dubai and Canada. Instead, the couple organized a wedding ceremony and then a party over Zoom with 50 relatives and friends.

“We thought if everyone is working from home, attending school, college and even yoga class from home, why can’t we get married from home?” Mumbai-based Singh said. “We eventually found a way to get married while fulfilling our duty of staying at home and also got to set an example of social distancing, which is the need of the hour.”

The couple, fittingly, had first met online a year ago, and clips from their Zoom chat show the guests in their own homes wearing colorful wedding finery, dancing and giving congratulatory speeches.

Kaur, who lives in New Delhi, said there had seemed to be little chance they could get the entire family together. “For me, a small wedding with all our loved ones takes precedence over a lavish wedding any day.”

For Kidan Levy in Israel, small was also beautiful. As the number of infections escalated in Israel, the government moved to shut down social gatherings. Weddings were broken up by police or even held in supermarkets to circumvent restrictions.

For Levy, the increasingly grave situation resulted in the incredible shrinking wedding, going from 250 guests in a grand venue to an event with 100 — until new directives said no more than 20 could gather. “Up until the last minute, we did not know where we would get married or even if we would get married,” she said. With aging parents, they decided to call the whole event off.

Except their parents wouldn’t let them. And so they held it with 20 people in the backyard late last month.

“We had planned something very large, and then we had a very small wedding and it was beautiful. Me and Moran were high on the clouds for days,” Levy said. “A force larger than us made us have a wedding that was smaller and more intimate and, in the end, it was much more suitable for both of us.”

In Gaza, May Tiryaqi initially postponed her wedding to June. She then decided to go through with the original date after all, even though her father could not attend because he was in quarantine. She told the Palestinian news agency WAFA that after a year of engagement, it was not clear whether they would even be able to marry in June so it was best to proceed since they had already paid for so much.

“We decided to have the marriage now despite of all of these problems. It will be less costly of course, as it will be limited to the two families, no filming, no hall, nothing, but I will wear the white dress,” she said.

In the video of the wedding, Tiryaqi is resplendent in her bridal dress with a matching white mask and gloves as she takes selfies with a similarly masked groom. After the ceremony, the couple dances in a courtyard, surrounded by a few masked relatives while neighbors applaud from the balconies.

Not everyone has gotten the message. In the crowded Baghdad neighborhood of Sadr City, the wedding party is alive and well. Zuhair Al-Atwani, a well-known wedding photographer from the neighborhood, says he still works as much as ever.

“Weddings are still going normally, but they don’t gather in wedding halls because they are all closed. It’s just driving on the streets in a convoy consisting of many cars of the groom’s family . . . to the bride’s house and picking her up, [and there is] lots of dancing on the streets and shooting.”

In a wedding video Atwani posted on his Facebook page, there is little social distancing as friends dance around the groom while he gets ready, waving Kalashnikov rifles. Then, when guests arrive at the home where the celebration takes place, everyone greets each other with kisses on the cheek.

As night falls, the men dance packed together in the garden. A few people wear masks, some wear one glove or two. At one point, one of the groom’s only friends with a face mask turns to the camera, whips off the mask and flashes an enormous smile before he continues dancing while twirling it on a raised finger.