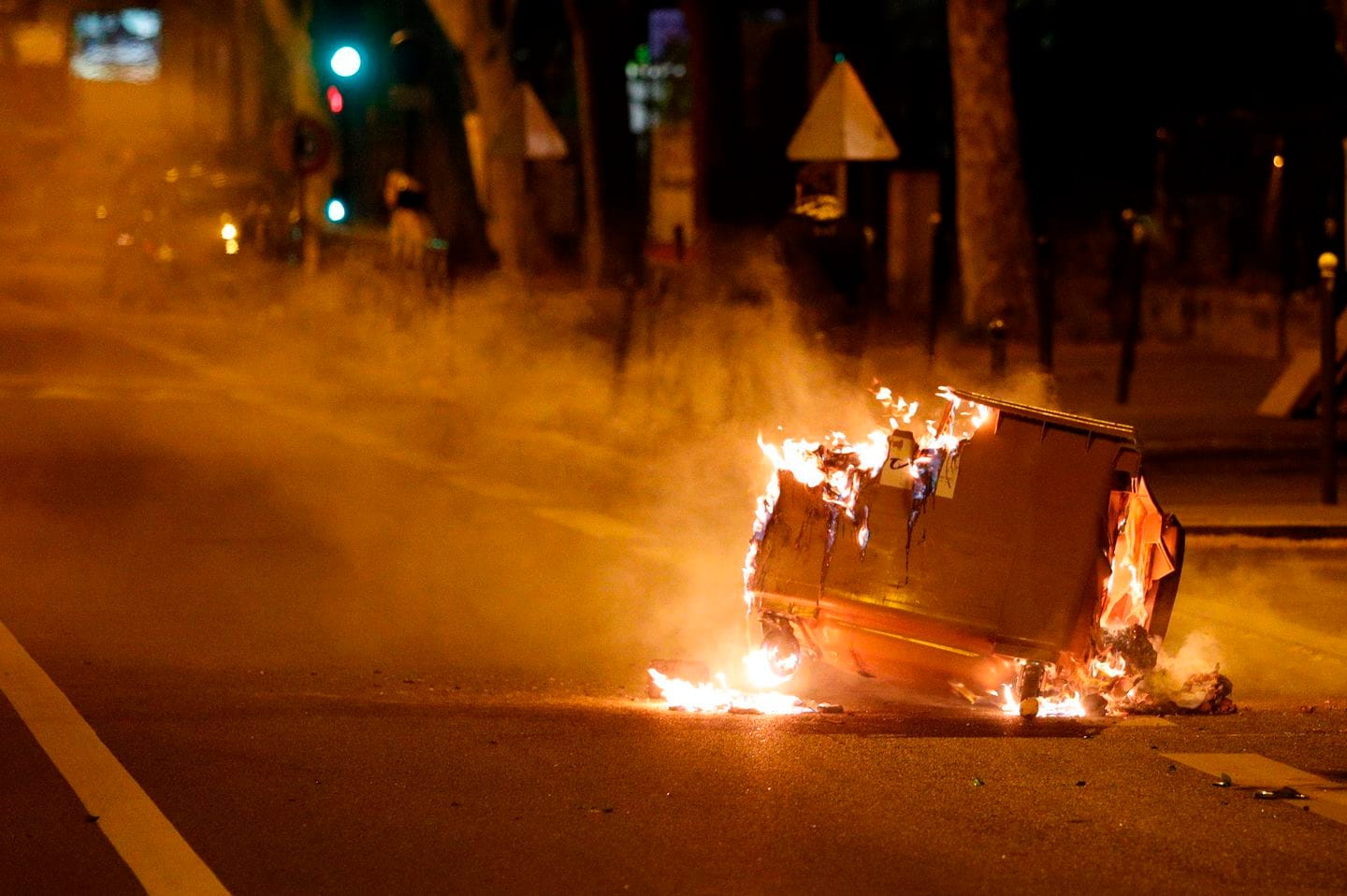 But, coming five weeks into a lockdown that has exacerbated inequalities, the incident brought simmering tensions to a boiling point in France’s poor and densely populated suburbs.

Video footage from Villeneuve-la-Garenne this past week showed protesters aiming fireworks at police, who responded with tear gas. The violent demonstrations spread to other Parisian suburbs, including Hauts-de-Seine, where an elementary school was set on fire on Tuesday night. Additional clashes with police, involving projectiles thrown at officers or the torching of trash cans and cars, were reported as far away as Toulouse in southern France and Lyon and Strasbourg in the east.

These protests have been small — nothing on the scale of the “yellow vest” demonstrations that rocked France for months in 2018 and 2019. But the violence stands out within Europe, where streets have been largely deserted and people have been largely accepting of the coronavirus-related restrictions imposed by their governments.

The riots in France have been first and foremost about heavy-handed policing — a preexisting controversy. But they are also about the strains of the outbreak and lockdown on working-class families, many of immigrant origins, who live in small apartments within crowded public housing buildings.

France’s restrictions on movement — in place since March 17 — allow people to leave home once a day for either exercise or essential shopping, but advocates say police have been monitoring for infractions in the suburbs more frequently than in the streets of central Paris.

Some of those who live in communities like Villeneuve-la-Garenne are essential workers — bus drivers, postal workers, grocery cashiers — who have had no choice but to continue working, and putting themselves at risk, through the lockdown.

Others have been confined to their apartments, with children home full-time, and with little ability to create any social distance from their neighbors.

These communities have been devastated by the coronavirus in ways wealthier Paris has not.

Directly north of Paris, Seine-Saint-Denis — colloquially known as “the 93,” after its administrative number — is the poorest department in the country and serves as something of a national metaphor for all of France’s suburbs. The total number of deaths recorded in the 93 between March and April 2020 is 128 percent higher than it was in the same period of 2019, according to data released by Insee, France’s national statistics agency. This is the second highest figure in France — behind only the Haut-Rhin, where France recorded its first major coronavirus cluster.

As a point of comparison, Paris saw a total mortality increase of about 68 percent during the same period this year — nearly half the amount of Seine-Saint-Denis.

If not all of those deaths would necessarily have been related to covid-19, the disease caused by the coronavirus, experts are now turning to these figures for a fuller, if still imprecise, sense of the pandemic’s scope. The umbrella totals, the reasoning goes, also include the deaths of those who were never tested for the coronavirus or who died at home without seeking medical care.

“It’s true that today, inequalities are killing in Seine-Saint-Denis,” wrote a group of six mayors and elected officials from the department in an open letter published in France’s Le Monde newspaper earlier this month.

The mayors blamed spending cuts that have whittled away at the department’s infrastructure for years and that, before the arrival of the coronavirus, were still a priority of President Emmanuel Macron’s government.

“These deep injustices, which no one can choose to ignore, will have to be tackled head on, with action,” the mayors wrote in their letter. “The new world, one after the pandemic, which even members of the majority are calling for, will no longer be able to follow the logic of budgetary austerity that sacrifices lives.”

“What the confinement has done is reveal huge inequalities that existed before,” said Goundo Diawara, a middle school counselor in Garges-lès-Gonesse, another northern suburb of Paris.

She said she and her colleagues have been regularly in touch with families by phone since the school closed, and she’s heard from parents who feel guilty about having to continue to work and not be available to supervise their children’s lessons, or about not being able to provide the tools their children need for remote learning, such as computers and Internet access.

These students, Diawara said, are “the least able to follow their courses, and they are the ones who need them the most.”

Macron’s government has taken these critiques to heart, promising to reopen schools first when France begins a slow emergence from its lockdown.

“Many children are missing out of school,” Macron said, “and there is an inequality in that there are those who don’t have Internet access and who can’t be helped by their parents.”

The plan is for the youngest students to return starting the week of May 11, with most schools back in session by May 25.

But that is unlikely to resolve tensions. While Macron has said going back to school will be voluntary, that parents concerned about the virus can continue to keep their kids home, lower-income working parents may not have that flexibility. Meanwhile, teachers’ unions are threatening to strike, potentially leaving the most disadvantaged students with even less support than they have now.

“When we compare ourselves to the U.S., we try to think, we French, that we’re way ahead of you guys,” said Eros Sana, a political activist in the Paris suburbs and the editor of bastamag.net, an online magazine that covers ecology and social justice. “You have people in so many states lining up to get food. But, the thing is, we have the same thing here. In Seine-Saint-Denis, Aubervilliers, people are queuing because they need to eat. We have the same issues.”

For Rokhaya Diallo, a journalist and anti-racism activist, the lockdown period has exacerbated already high tensions between the banlieues’ black and Muslim residents and the French police.

The lockdown requires all who leave their homes to carry “attestation” forms that justify the reason for their trip, in theory for police inspection. What this means in reality, Diallo said, is more frequent contact between two groups that historically do not trust each other.

The Paris suburbs have been the site of protests against police brutality before.

In 2005, for instance, violent riots followed the deaths of two teenagers who were being chased by police and ended up being electrocuted at a power substation in Clichy-sous-Bois, an eastern suburb of Paris.

France also saw Black Lives Matter demonstrations in 2016, after a 24-year-old black construction worker, Adama Traoré, died in police custody in Beaumont-sur-Oise, a town about an hour north of Paris.

But now, there’s the added danger that such demonstrations may advance the spread of the coronavirus.

The 30-year-old man injured in last weekend’s motorcycle incident, whose name has not been disclosed, has filed complaint against the police, while local authorities have opened an investigation. But the man called for an end to the protests in a video statement from the hospital.

“I ask you to go back to home, to stay calm,” he said. “Justice will be served.”