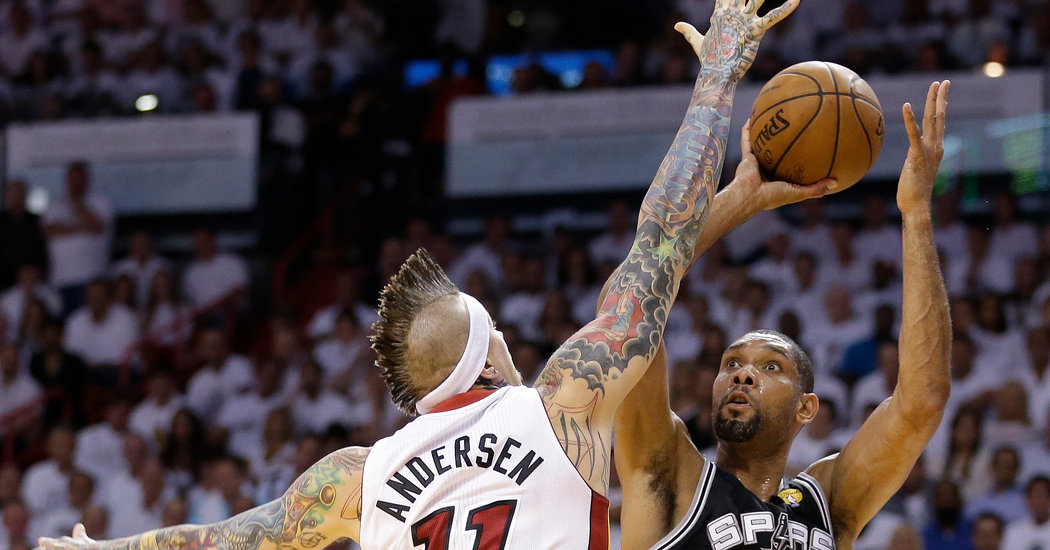 Gushing praise for Duncan’s unflashy but lethal weapon may have been rare when he was still playing, but McCollum answered one tweet by describing it as “legendary.”

Jason Kidd had similar praise when reached by telephone. With memories still fresh of his Nets having to cope with a dominant Duncan and that bank shot in the 2003 N.B.A. finals, Kidd offered this scouting report:

The same naturally applied to Duncan’s Hall of Fame candidacy. For all the sizzle his career and his go-to move supposedly lacked — for all the cries that the bank shot helped make Duncan and the San Antonio Spurs, by extension, boring — he was a lock to headline the Basketball Hall of Fame’s 2020 class alongside his longtime rivals Kobe Bryant and Kevin Garnett and the W.N.B.A. star Tamika Catchings.

“He had the face-up game, the back-down game, the bank shot,” Nowitzki continued. “He had hooks over both shoulders. He was an exceptional defender with a super high basketball I.Q. The total package.”

Playing under Coach Gregg Popovich the entire time, Duncan is the only player in N.B.A. history to amass 1,000 or more victories with one franchise. Their teams never missed the playoffs.

Coach and player shared a deep contempt for the spotlight and a fondness for the game’s elementary principles, leading Popovich to eventually mix bank-shot drills into his practices and occasionally wonder aloud why more players didn’t try to master the skill.

Yet the way Duncan so consistently and efficiently converted midrange jumpers off the backboard prompted Shaquille O’Neal, one of his foremost individual rivals, to concoct Duncan’s most memorable nickname: the Big Fundamental.

“You know how I played: I tried to intimidate guys and ‘bow guys, but none of that ever fazed him,” O’Neal told me in 2016, referring to the elbows he used to throw. “As far as giving me problems, he’s right behind Hakeem Olajuwon. Not because of his moves. Because of his mind.”

The only thing missing from Duncan’s résumé was back-to-back championships. The Spurs, at their peak, won titles in 2003, 2005 and 2007. But almost as often as they ruled the league, they were subjected to playoff heartbreak — including Derek Fisher’s dagger with four-tenths of a second left in a 2004 win by the Los Angeles Lakers, Manu Ginobili’s costly foul on a driving Nowitzki in 2006, and the agonizing losses in Game 6 and Game 7 of the 2013 finals in Miami before the Spurs bounced back to humble LeBron James and the Heat in 2014.

The Spurs’ place in basketball history would surely be even loftier had they merely repeated as champions once, but the unflappable Duncan never worried about that — or how unfashionable his pet shot was. Dating to 2003-04, when the league began tracking bank-shot data, Duncan made 945 of them, converting 59.1 percent of his banked attempts over his final 13 seasons.

In the 2006-07 season, Duncan shot a ridiculous 116-for-165 on bankers — 70.3 percent. To illustrate what a lost art that is: Anthony Davis, Giannis Antetokounmpo, Joel Embiid and Karl-Anthony Towns, according to research by my longtime colleague Micah Adams on these four of today’s elite power players, combined to covert only 25 bank shots this season, led by Davis’s mere seven.

Malik Rose joined the Spurs as a free agent shortly after Duncan was drafted in 1997 and quickly established a close friendship with Popovich’s prize rookie. As Rose recalled, Duncan — originally a swimmer — frequently told stories of his late introduction to basketball while growing up in the Virgin Islands with limited access to basketball courts. Rose, now an assistant general manager for the Detroit Pistons, said Duncan mentioned a teenage friend whose makeshift hoop had a plastic backboard.

“Timmy would say there was a spot on that backboard where, no matter how hard you hit it, it was going in every time,” Rose said. “So that’s what he aimed for every time. That’s how he perfected his bank shot — or just grew his love for the bank shot.”

From there, Rose shifted to the retelling of Duncan’s first trip to the N.B.A. playoffs. San Antonio swiped Game 1 on the road against Phoenix in April 1998, back when first-round matchups were best of five. Duncan scored 18 of his 32 points in the fourth quarter.

“Hot Rod Williams must still have nightmares from that game,” Rose said. “Timmy was giving him the business with the bank shot from both sides. It was money.”

Such tales have to come from observers because Duncan has been even more consistent in his refusal to share them himself.

He did say a few words in a brief ESPN interview and in two video clips distributed by the Spurs after his Hall of Fame selection was announced — in stark contrast to the silence Duncan insisted upon when he retired as a player after the 2015-16 season and then unexpectedly joined Popovich’s coaching staff as an assistant last summer. But Rose cautioned against expecting Duncan to expound during his induction speech.

“It’ll be the shortest speech of the night,” Rose said.

That’s a safe forecast. Duncan always preferred to let his game do the talking and seemed to relish the lack of hoopla he generated by banking in shot after shot off the glass.

“He could have played in any era, from the ’60s to today,” Kidd said. “He just brought his hard hat and his lunch pail to work and played. He was the Big Fundamental.”