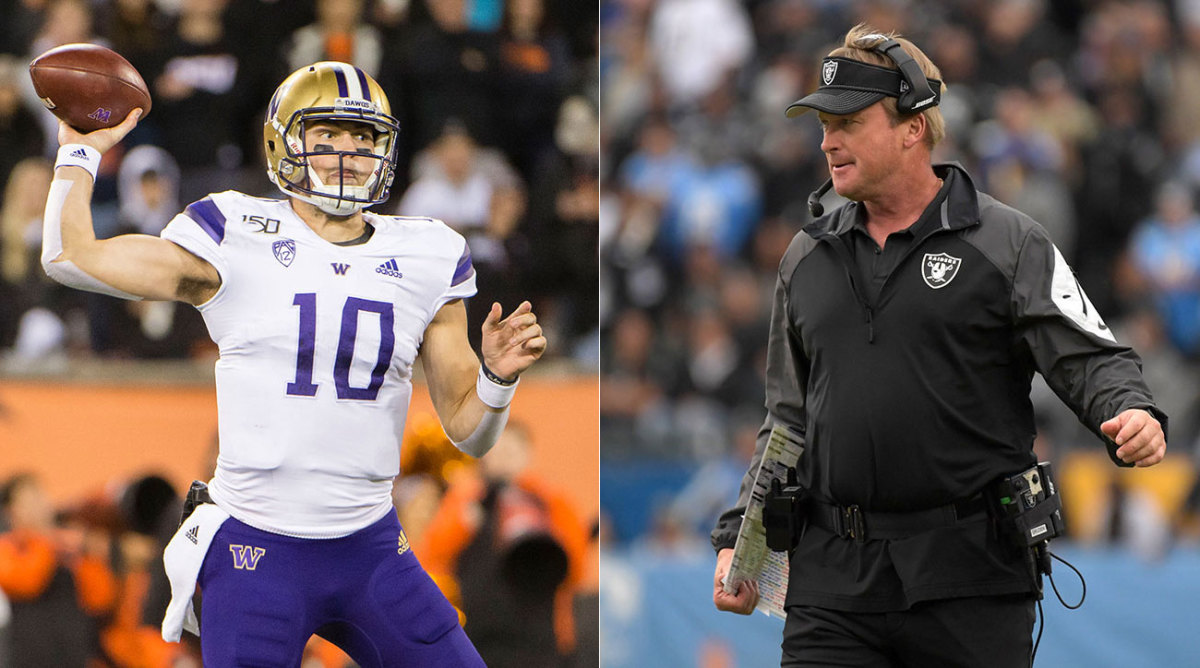 The depth of this year’s class helped turn Day 2 of the NFL draft into less of a trivial viewing afterthought and more of an extension of the first round. Some teams made serious power moves, others continued to shrink in the moment and a good dog stole our hearts.

Bill Belichick and his dog

If you are a dog owner, this time of isolation has probably made you aware of a special, if unconscious bond you have with your four-legged friend. For me, it might be when my cairn terrier, Ernie, wedges himself between me and the couch and we both flip through a magazine together. For Belichick, it’s when he lovingly feeds his dog, Nike, a scrap off his plate after drafting a versatile cover linebacker or D-II defensive back.

There was a great deal of personal anticipation on my end as to how Belichick would handle the intrusive home cam setup. This is a person who defiles NFL-labeled merchandise, wears non-logoed pullovers and whips Surface tablets just to thumb his nose at the powers that be. Was there any question that he would come up with a beautifully passive-aggressive solution to having a camera placed in his quaint Nantucket pad?

One overlooked aspect of hiring a recently-imported head coach from college football is that they bring with them a unique perspective on the incoming draft class. Matt Rhule recruited for and competed against a good deal of 2020 players, as he spoke about with our Albert Breer, and he’s handling the board as such.

It’s hard not to imagine that Rhule got Week 1 starters with each of his first three picks—Derrick Brown, Yetur Gross-Matos and Jeremy Chinn. This was a foundational draft for the Panthers, who seem to be expediting any kind of rebuilding process. At nearly every critical position this winter and spring, they’ve gotten cheaper, younger and faster.

What a difference capable bodies make in the front office. A Washington draft hasn’t felt this clean since Scot McCloughan was running the show. Seemingly overnight, Ron Rivera has upgraded his defensive line to top-five potential and added Antonio Gibson who, if you have yet to see his Memphis tape, I urge you to take a few minutes.

We can get carried away with the idea of versatility in today’s NFL, especially if a player doesn’t do any of the myriad roles particularly well. That’s not the case with Gibson, a player we’re going to see shifting everywhere in the backfield and out wide causing coverage fits for the defense.

This was a critical draft for both the Giants’ Dave Gettleman and Jets’ Joe Douglas for different reasons. Both had rosters perforated with holes, though Douglas is at the beginning of a long rebuild while Gettleman is beginning to feel the pressure after a third straight year with significant high draft capital. Both seem to have checked some boxes Friday night.

Douglas snagged both Baylor wideout Denzel Mims and Cal safety Ashtyn Davis, players who can sensibly plug in to critical roles immediately. Davis, especially, will give Gregg Williams some positional flexibility in the secondary. Mims will join a long list of Jets’ wide receivers that come into camp with great promise and potential.

As for the Giants, Xavier McKinney is a first-round talent who helps upgrade the back end and give Joe Judge some more versatile coverage options. McKinney played everywhere at Alabama and even rushed the passer a bit. He spent a little more time in the box than the slot, but was still adept in coverage, holding opponents to a 56% catch rate in 2019.

After a scattershot round one, Gruden and Mike Mayock used back-to-back picks in the third round to shore up the back end of their receiver depth chart. The team was critically low on weapons a year ago and adding Lynn Bowden in particular gives Gruden and Carr a modern slot option, with experience in an RPO offense, who eats up yards after the catch. (He even attempted 79 passes at Kentucky.)

As much as we tease Gruden in this space, there was most definitely a promise to his offense that we weren’t able to see because of their troubles at receiver. Layering the depth chart with cost-controlled talent increases their chances of hitting on at least one.

If you were to draw up a game plan to passive-aggressively needle the Packers’ fan base and franchise quarterback over the course of 24 hours, taking Aaron Rodgers’s eventual replacement in the first round and a running back in the second would’ve been a good way to start. Green Bay took A.J. Dillon out of Boston College with their highest Day 2 pick, despite having a talented back in Aaron Jones on the roster already.

First-round pick Jordan Love told ABC that he had a conversation with Rodgers during Friday’s draft show, but it’s difficult to imagine this was a series of events that pleased the future Hall of Fame quarterback. And, in case Brian Gutekunst hasn’t realized, Rodgers will find a way to make that known at some point. It will be a hurdle to get over.

Georgia’s Jake Fromm and Washington’s Jacob Eason, both believed to have fringe first-round or second-round potential, remained on the board at the close of business Friday. Only Alabama’s Jalen Hurts went on Day Two.

This was a difficult time to be a developmental project without a versatile skillset like Hurts. The Eagles have not been secretive about their desire to add more diverse weapons to their offense, including a second quarterback who can throw and run. Fromm and Eason are going to have to crack a roster in the more traditional sense and work their way up.

Given the glut of quarterbacks on the board and the ones available in free agency or via trade, it might be harder than normal to break through the noise.

Whether it was Check out my M&M’s Roger or Let me lean back casually on my bespoke leather arm chair Roger, nearly every cutback to Bronxville, N.Y. was painfully awkward. I have long maintained that Goodell is a fascinating person who we’ll never truly get to know. Even the virtual booing, which could have been a moment to confront the stiffness he’s long exuded, turned into a bit so uncomfortable that I found myself longing for the days when an orangutan announced selections from the Indianapolis Zoo.

Baltimore is hitting its stride right now, dominating not only free agency but the early portions of the draft. Adding J.K. Dobbins at the top of the second round, followed by Malik Harrison at the end of the third, the Ravens continue to double down on the elements of their offense and defense that made them a breakout team in 2019.

Despite a quantum leap at offensive line for the Browns, and the Steelers nabbing the talented Chase Claypool at the top of the second round, it seems like Eric Decosta and Co. are putting some serious distance between themselves and the rest of the division.