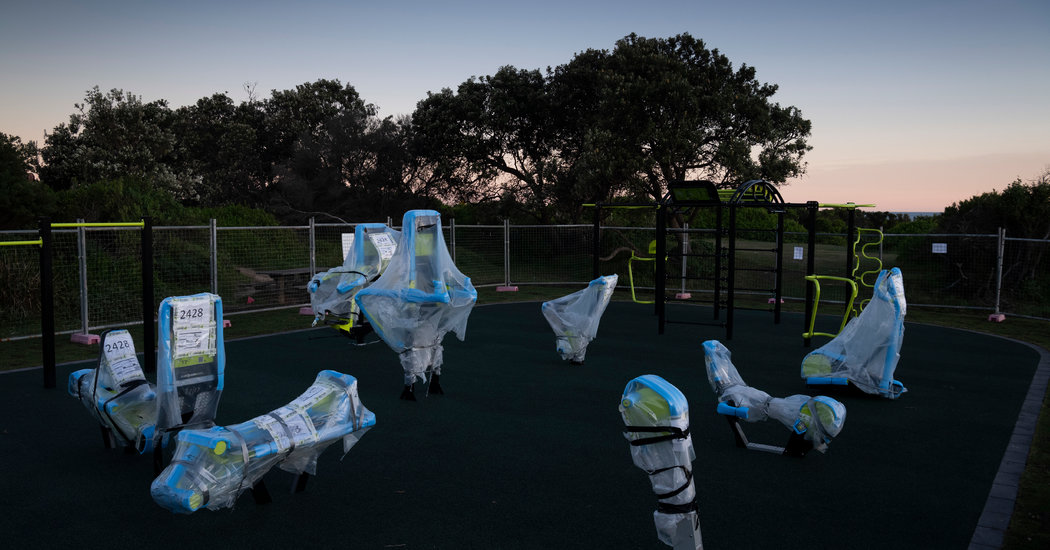 This past week, I’ve had multiple stressful dreams involving my friend Debbie, who lives in Atlanta. I couldn’t figure out why until the most recent dream, in which Debbie was in Melbourne, stranded because international flights were suspended due to the coronavirus.

“That’s OK, you can just stay with us until this is over,” I told her.

I woke up awash in calm until I realized that Debbie isn’t here, she’s still in Georgia, along with many of my other closest friends. (My first newspaper job was in Atlanta, where I lived for six years.) Debbie has an autoimmune disease that makes her especially vulnerable to coronavirus.

Meanwhile, in Australia, our extreme social distancing and lockdown measures appear to be working. This week, Damien Cave reports on Australia and New Zealand’s “rapid suppression of the coronavirus outbreak,” with only a handful of new cases reported each day:

The results are undeniable: Australia and New Zealand have squashed the curve. Australia, a nation of 25 million people that had been on track for 153,000 cases by Easter, has recorded a total of 6,674 infections and 78 deaths. It has a daily growth rate of less than 1 percent, with per capita testing among the highest in the world.

New Zealand’s own daily growth rate, after soaring in March, is also below 1 percent, with 1,456 confirmed cases and 17 deaths. It has just 361 active cases in a country of five million.

This stands in stark contrast to the dark news coming in from the U.S.A, where more than 42,000 people have now died from coronavirus, a figure that will likely be tragically out of date by the time you read this.

There’s an extreme emotional dissonance in feelings of gratitude for Australia’s relative safety, when so many people I know and love are in the U.S. where things seem out of control.

Debbie is just one member of my close circle with circumstances that induce nightmares. My mother, who lives in California, is over 70 but still working. She’s doing so from home for now, but it’s unclear how long that might be possible.

Will she be asked to return to the office before it’s safe?

While I do my shopping easily at Woolworths, where distancing is strictly enforced and there is hand sanitizer on entry and exit, friends in L.A. line up for hours to enter supermarkets, distanced but also surrounded by a population in which infections continue to rise.

I have relatives here in Australia who are doctors and nurses, and I worry for them too. My family, like many Australian families, is under extreme financial and emotional stress thanks to the pandemic and resultant shutdown. I am also horrified by the predicament of temporary visa holders here who can’t return home but aren’t eligible for government support.

Despite all of these things, I have never felt so thankful to live in Australia.

Is there something about this situation that makes you particularly grateful? Let us know at nytaustralia@nytimes.com.

Here are this week’s stories:

Last week, we wrote a remembrance of Tim Brooke-Taylor and The Goodies, and asked if there has been a coronavirus loss that particularly affected you. Here’s one reader’s response:

I have been in events management for a number of years now, and part of that time I have spent being an Artist Liaison. Doing this work has allowed me the opportunity to meet some of my heroes, but a particular thrill for me was meeting the American record producer Hal Willner. I was lucky enough to work with him on three projects in Australia, and was warmly welcomed into the extended group of talented people that were in Hal’s orbit.

Hal was a person who was truly loved by people from all areas of arts and music. The celebrity roll-call of musicians who gladly worked with Hal is both long and august, drawing from the craziest extremes of experimental jazz and spoken word, through to the sweetest soul and avant-garde rock.

At this time when grief seems to be our daily condition, the news of his passing felt like a waking slap. The death toll grows and grows, and you keep it at arm’s length, not wanting it to infect you. You get on with your life, and look after your family and yourself, and you live in your little bubble of privilege.

But then a person you know is taken, so swiftly, by this indifferent plague, and it is still a shock. All the hand washing and mask wearing you like won’t change that.