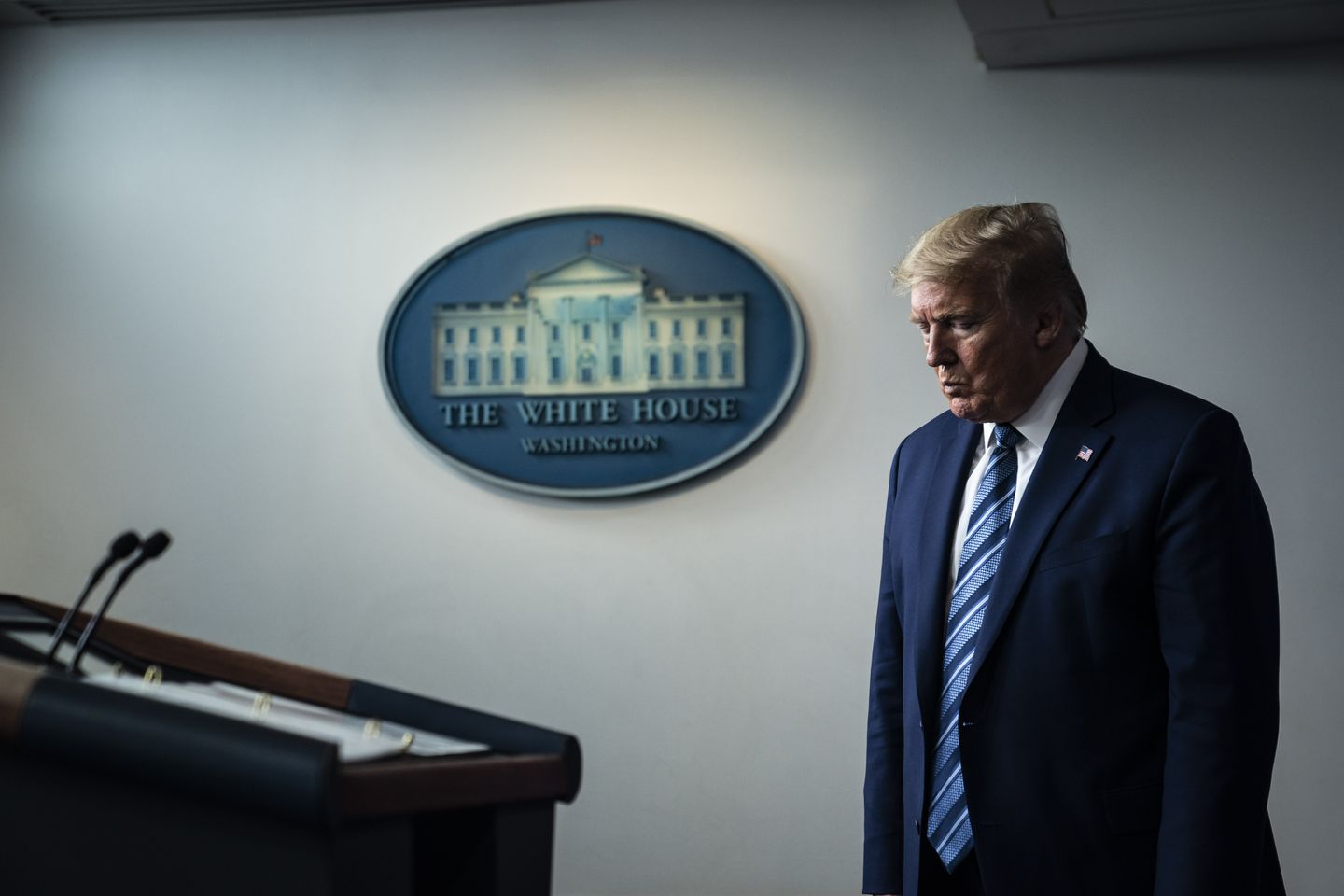 For thousands of people in the process of becoming U.S. residents, the already substantial hurdles to securing the holy grail of U.S. immigration — the green card — have been raised higher by the order this week, which bars certain categories of immigrants from entering the United States for 60 days. The aim, Trump has said, is to protect American jobs while the country combats the coronavirus. He has said the initial term could be extended.

The decree isn’t as sweeping as Trump first suggested. It doesn’t affect applicants already in the United States, medical workers, farmworkers, the spouses of U.S. citizens or their children under 21. Many families, made anxious by Trump’s tweeted announcement on Monday, voiced relief when details emerged Wednesday.

Yet now that the details are known, many others face more uncertain futures.

Spouses of green-card holders now face indeterminate waits to reunite with husbands, wives and children. The decree halts many employment-based immigration visas, as well as those for parents and siblings — a system Trump and other critics call “chain migration” and have sought to clamp down on.

The following are based on oral accounts and have been edited for length and clarity.

Drawn to the warmth of American culture

My American dream began at age 16. I traveled from my home in Rio de Janeiro to Florida, where I competed in the 2002 Pan-American Championships in my sport of Brazilian jujitsu. We Brazilians are known for our hospitality, but the warmth of American culture, the friendliness of the people, sincerely moved me. One day, I told myself, I would move to the United States.

I found international success in the years that followed, competing and winning top championships. As Brazilian jujitsu became a global phenomenon, I became sought after for coaching and gym management jobs. In 2007, I applied for and received a temporary U.S. visa that allowed me to work at a gym in Georgia. That only redoubled my desire to make the U.S. my forever home.

I was living and working in Saudi Arabia with my wife and two children when I applied for permanent residence in the United States last May. Brazilian jujitsu, to me, is more than a sport — it’s curative of social ills and provides kids a chance to stay away from drugs and build up self-esteem. I had plans to partner with schools in California and Florida, develop a curriculum for special-needs children and open a gym that would generate new American jobs. I’d passed most of the hurdles in the immigration process and was expecting good news any day. Then I saw the news on Twitter. President Trump was suspending the program.

I felt deflated. And yet, I get it. We are in the middle of a global crisis, and millions upon millions of Americans are out of work. I guess the president is doing what he thinks is best for his country.

But I hope he reconsiders and understands that I and other foreigners can offer talents even in these difficult times that are impossible to find elsewhere. We don’t know how long this delay will last. But our hope springs eternal that one day we can still live our American dream.

A family at risk of falling apart

When I first read President Trump’s decree, I felt like the ground was caving in beneath me.

For three years, my family has been separated, waiting for the day when the U.S. government would finally allow my 4-year-old daughter and me to reunite with her father and my husband, Jorge Luis.

I met Jorge, a Cuban doctor, when he was working in Brazil. He legally moved to the United States in 2016 under a program created by President George W. Bush to encourage Cuban medical professionals to seek asylum there. We submitted piles of paperwork — marriage certificates, birth certificates, clean criminal records. All the while, we remained apart. He worked as an Uber driver in North Carolina while I learned to be a single parent, all the time waiting for the day when we could again be parents together.

“Check the mail,” my daughter would constantly plead, hoping for news on our visas and when she could see her father.

I didn’t know how to tell her that now, there might not be any immigration letters coming for a long while.

President Trump’s decree could destroy my marriage and break apart my family. Because my husband is a green-card holder and not a U.S. citizen, he is not specifically exempted in the new decree. It’s left me emotionally destroyed. I’ve put my life on hold for the last three years, believing in the promise of that green card.

My husband and I followed the legal immigration process and never once broke the law. We pay U.S. taxes and contribute to the economy. Now he is working 55 hours a week at an Amazon distribution center in Texas, shipping groceries, books and toys to help American families get through this quarantine.

Meanwhile, his own daughter does not know when she will be able to hug her father again.

I made a mistake but was inching closer to a solution that would take me back to my family in the United States. Then I saw a tweet about President Trump’s decree.

Two decades ago, I entered the United States on a tourist visa. I was 18 years old, and my father had already immigrated and was living in Massachusetts. I desperately wanted to join him, to escape the violence and death I lived every day in Medellín. So I overstayed my visa and lived as an undocumented migrant.

My life took unexpected turns, some wonderful, some not. My mother joined us in East Boston and, along with my father, earned her green card. But my irregular status haunted me, even when I met the love of my life. We could not legally marry, but we had two beautiful children. I built a cleaning and maintenance company, which we kept under my mother’s name.

In 2010, my parents started the process to try to normalize my status. Last year, I was told, the paperwork for a green card had to be filed back in Colombia. So I left my family — my children — to try to make things right.

Now I am stuck here, in a country that is no longer mine, because any lifeline I had to a green card has been put on hold by the presidential decree. I vacillate between sadness and frustration. My family depends on me. Back home in Massachusetts is a company I built. My mother — now a widow — is struggling to run it. My children, one of them in college, need me there.

I am not taking away jobs from Americans — I am creating them. I am afraid that my company will fail in my absence and that my family will fall into poverty. I fear a prolonged separation that I cannot bear. I know not everyone sees me that way, but I feel American. I feel it when I celebrate American holidays, when I cry about the tragedies that strike my country, the United States.

It is very hard to see the country that I love so much now so desperate to keep me out.

On the final day for the green-card lottery last year, my husband, Andrii, and I submitted our application. Lots of people also applied at the last moment, temporarily bringing down the website. As a result, ours went through five minutes after the deadline, but it still went through, probably the last to be accepted. I said to Andrii, “Our application has to be successful.”

I’m a person of action, and I don’t just talk about a situation. I take action. I want to change my life for the better, especially for my children. They’re 4, 6 and 10 years old. I like the system of education in the United States, how teachers work with their students. Our system of education in Ukraine is different.

In America, there are so many financial and investment opportunities. I want to be a part of that. I like Americans. I like their way of thinking. Most of all, I like how Americans respect other people and their human rights. This is the main value in your country. And this is how I want my children to grow up — in an atmosphere of respect for their rights. It was the reason we applied for this lottery.

I work at one of Ukraine’s most prominent law firms. Andrii is also is a lawyer — we’re a lawyer family. If the lottery is delayed because of President Trump’s decision, it means that we will still follow through with our U.S. plans, although maybe it will take a little longer now. My husband has a job. I have a job. We are successful in life. We will live as we did before until our time comes.

And if we’re unsuccessful now, we’ll try again. Maybe it’s even better, because we’ll have more time to plan. But I know that one day we’ll get there.