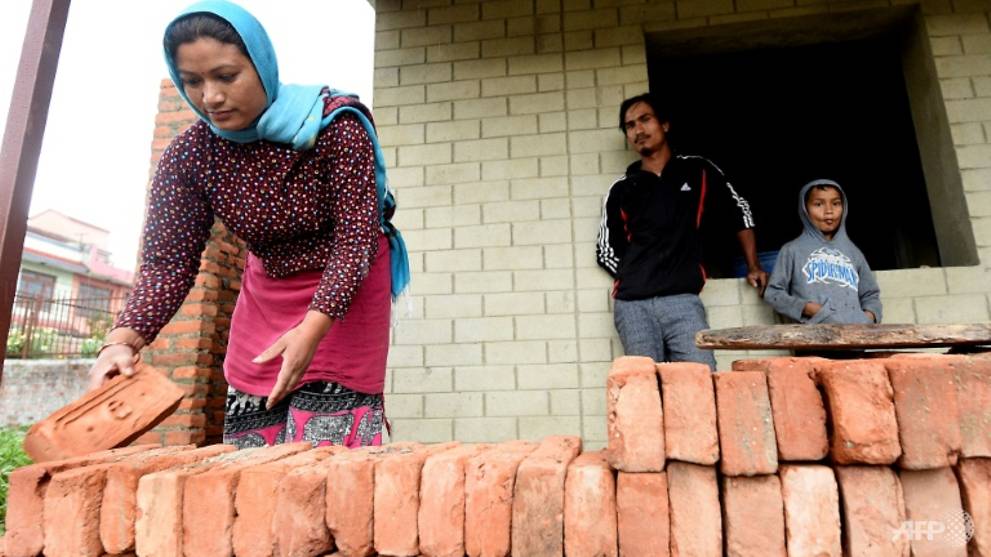 BHAKTAPUR: It has been five years since an earthquake devastated Nepal, but Krishna Maya Khadka is still struggling to come to terms with losing her husband and the home she lived in for generations.

Like hundreds of thousands of Nepali quake victims, the 68-year-old now lives in a small one-bedroom hut with a blue corrugated iron-sheet roof – one of many that scar the picturesque villages turned to rubble by the disaster.

Since the 7.8-magnitude quake struck on Apr 25, 2015, killing nearly 9,000 people and leaving millions homeless in the Himalayan nation, the government has faced criticism over the slow pace of reconstruction.

The rebuilding efforts have been hit by political infighting, bureaucracy and confusion.

About a quarter of victims’ homes have yet to be rebuilt, although authorities say the remaining houses are expected to be completed within a year.

Those who have new homes, like Khadka, say a 300,000 rupee (US$2,450) government grant to build the quake-resilient structures has been woefully insufficient and left families having to cram into tiny, suffocating spaces.

“Those who have money have no problems, they are already building, it is poor people like us who suffer,” Khadka, who lives with her daughter and several goats and chickens in one of the worst-hit districts, Sindhupalchowk, told AFP.

“This is nothing like our old home, now we eat and sleep in the same room. It is very difficult… It was impossible for me to make anything bigger, I had to take a loan to even make this small house.”

But a survey last year showed the number of homes measuring 26 sq m to 50 sq m, typically with only two rooms, doubled after the quake.

In Bhaktapur city near the capital Kathmandu, Anjana Tajale is about to finish building a two-room hut funded with the sale of her family’s ancestral land.

Tajale and her family of seven spent the first year after the disaster – the worst quake to hit Nepal in 80 years – in a temporary shelter in the shadow of their damaged home.

They had to resort to selling their land to move out of the unsafe building.

But the new, modest structure will be a tight squeeze for her in-laws and two children.

“I hope the government pays attention to how the people are rebuilding … their economic conditions,” Tajale told AFP.

“It would be better if the government understood that and gave more aid to those who need it.”

An immediate priority of the government had been to ensure affected families had a home, said Faris Hadad-Zervos, Nepal country manager for the World Bank, which offered up to half a billion dollars to finance reconstruction.

Nepal’s rebuilding chief Sushil Gyewali, who helms the estimated US$9 billion recovery fund, said the grants for families were sizable for the impoverished country.

The national reconstruction body was working with local governments “so that if anyone wants to expand they can do so while keeping the house resilient”, Gyewali added.

But with houses just a fraction of the size they used to be, some people have resorted to returning to their old, damaged houses, or to building flimsy extensions that are not quake-resilient.

“We are already seeing the trend of people expanding their small homes vertically or horizontally to meet their needs,” said Minar Thapa Magar, national coordinator at the Housing Recovery and Reconstruction Platform, which commissioned the survey.

“That makes them even more vulnerable (to earthquakes) in the future,” he told AFP.