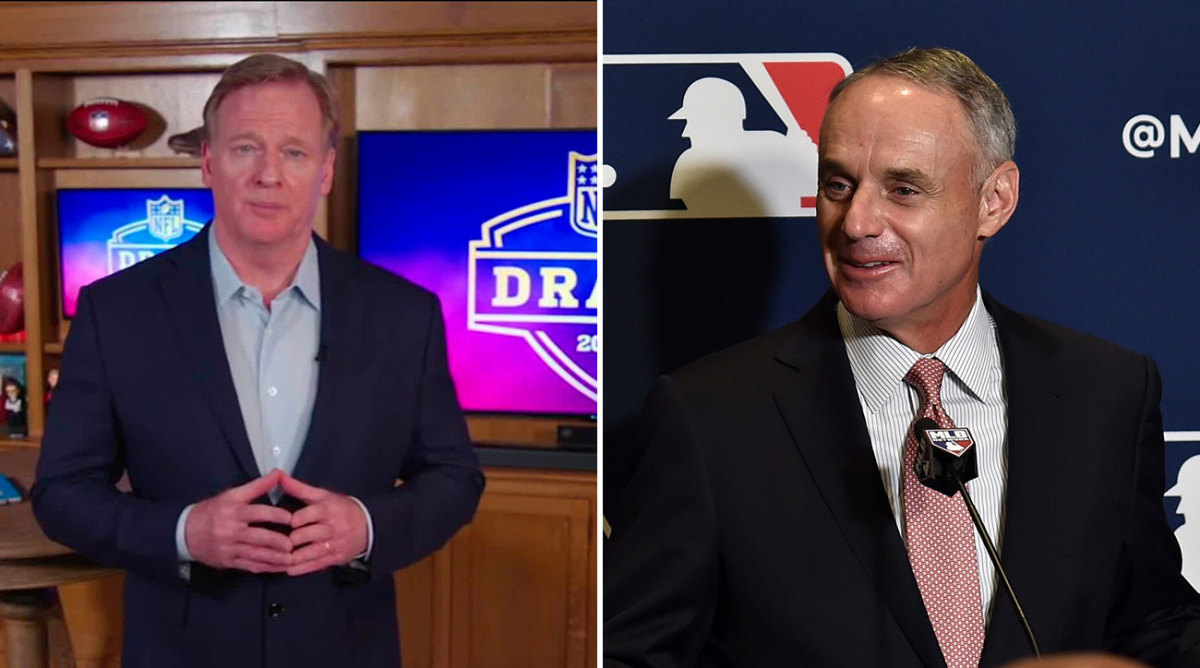 Welcome to the era of the virtual draft. The WNBA kicked the sports world off here last week, and, after much agonizing over the question of tech support, the NFL joined on Thursday. So what does it mean for MLB?

The answer might ultimately be nothing: In last month’s joint agreement between MLB and the MLBPA, the league built in the ability to move the draft from its originally scheduled date of June 10 to as late as July 20. Depending on public health guidelines this summer, the event could look more or less normal. (Or, at least, as close to “normal” as you can get with a draft that will be shortened to as few as five rounds, a result of the same agreement that created the flexibility around its date.) But it could just as easily look like what we’ve seen from the drafts this month—appropriately social-distanced, with the accompanying fear of possible tech problems and plentiful opportunities to judge home offices.

Of course, MLB’s draft has never been anything close to a glitzy hype-machine like the NFL’s annual event. (Look no further than the fact that baseball’s original spicy draft move for this year was “Let’s move it from Secaucus to Omaha” while football’s was “Let’s have the players cross by boat to the stage in the fountains of the Bellaggio.”) MLB is used to a world in which first-round picks learn their fate via phone call; a virtual baseball draft wouldn’t have to feel much different from what we’d see under normal circumstances. But if there was ever a time to try to make the format more engaging—to have it feel a little more like an event and a little less like an administrative necessity—this could be it. So based on what we saw Thursday from the NFL, let’s have a little fun with the lessons that could translate for a similar situation in MLB.

• Lean into the environment. Okay, yes, it’s hard to think that MLB could produce any draft location as gloriously meme-able as Kliff Kingsbury’s living room (Peloton commercial!) or Jerry Jones’s mega-yacht (Bond villain!) But there would still be fun to be had in putting general managers and scouting directors in the spotlight—comparing A.J. Preller’s setup to Brodie van Wagenen’s to Brian Cashman’s. Who’s got a dozen monitors on his desk? Who’s in his basement? Who includes their kids? Who leaves a piece of paper with potentially important information in view of the camera? It’s as humanizing as it is entertaining.

• More room to focus on the players. The MLB draft has previously been the domain of prospect hounds, diehards, and few other fans. It’s understandable for a sport where draftees often won’t be able to make their mark on a franchise for several seasons. But if summer rolls around, and the country is still in a place where it’s starved for fresh sports, this could be an opportunity for the draft to go with something different. It’s a chance to really showcase these players—not just their performance on the field, but who they are off of it, which can be especially crucial for a sport that still receives so much hand-wringing over its marketability.

• Robes for all. On that same point, what better way to let players (and, for that matter, front-office execs) show some personality than by encouraging them to wear whatever they want?

What Not to Do

• Try to make it what it isn’t. A mid-pandemic draft is probably going to require some concessions. (Such as… the fact that we still don’t know what month it’ll be in, or whether it’ll have a central location, or exactly how many rounds it’ll include.) But that’s understandable, and with creative planning, it should be perfectly feasible to work around them. What’s less understandable is trying to ignore them or hide them with cheesy workarounds. (See: Roger Goodell piping in pre-recorded boos for Thursday’s Round 1.) It’s possible to acknowledge that an event has to be different this year without spamming viewers with forced reminders.

• 30-second interviews with draftees via shaky video connection. There are plenty of fun features to meet the aforementioned “focus on the players” goal without this awkward one.

• Leave any virtual doors open with old passwords. Hey, baseball’s been burned by this one before.