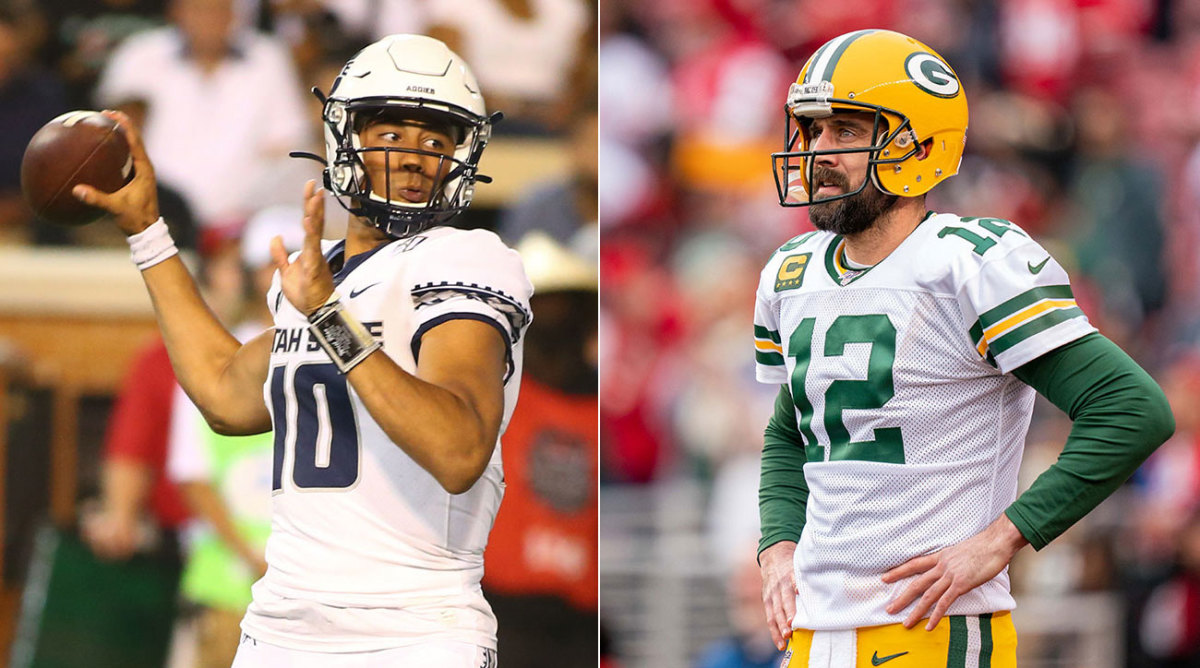 Suddenly, the Packers were on the clock, and … wait, why was the ESPN broadcast taking us inside Jordan Love’s living room in Bakersfield, Calif.? Why were two of the people in the room filming him with their cell phones? What … was … happening?

Just the biggest surprise of the first round (narrowly edging out Jerry Jeudy asking Roger Goodell to join him in a TikTok): The Packers had not just drafted Utah State QB Jordan Love, they’d traded up to do so, spending a fourth-round pick to move up four slots.

Aaron Rodgers was hoping for a different kind of offensive weapon than a player the team clearly sees as his eventual replacement. Rodgers is 36. Brett Favre was 35 when the Packers drafted Rodgers in 2005, a masterful move that netted the Packers their next Super Bowl-winning QB, but also set up a very awkward changing of the guard. It’s a price the Packers no doubt would be willing to pay again for the same outcome.

The remote draft broadcast had cameras trained on both head coach Matt LaFleur and GM Brian Gutekunst as LaFleur began to dial the number of his future QB, looking like a big grin was ready to peek through. The reaction most of us were wondering about, though, was that of LaFleur’s current QB, who had pointed out in an interview on the web show of former Colts punter Pat McAfee that his team hadn’t picked a skill player in the first round in a decade-and-a-half. This wasn’t even a subliminal message to his team’s decision-makers; it was a direct one.

The LaFleur-Rodgers partnership had much success in year one, with the Packers advancing to the NFC championship game. After the lopsided loss to the 49ers, Rodgers deemed the team’s proverbial “window” to still be open, mentioning the need to continue to add pieces to the roster. But this piece—Love—is about the next window, rather than the current one.

Gutekunst, who has worked for the Packers since 1998, was an area scout when Ted Thompson made the decision to draft Rodgers. In that circumstance, though, Rodgers was famously still on the board (and in the green room) at No. 24 despite having been in consideration to be the first overall pick. In this case, the Packers didn’t break a top player’s fall—they made a decision to go up to get Love, so they didn’t miss out on him.

Earlier this offseason, Gutekunst told beat reporters that, “sure,” he would consider taking a QB at No. 30, referencing back to Thompson’s decision to take Rodgers. But it seemed very possible that was just a cover-all-bases, we-explore-everything type of answer. The Packers, after all, were a 13-win team last season that was just one win from the Super Bowl, and they had plenty of other roster holes (like receiver) that a first-round pick could plug.

The other side of the coin is that despite the team’s success last season, Rodgers couldn’t always summon the magic that has defined his career. Opposing teams noticed him missing some of those special throws he’d built his legend on making seem routine. Last year was also his first year adjusting to a new offense, and Rodgers has said that he’d like to play into his 40s.

Last month, in an interview with ESPN Milwaukee, Rodgers said he “wouldn’t have a problem” if the Packers drafted a QB in the first round, believing that, “it doesn’t matter who you bring in, they’re not going to be able to beat me out any time soon.” He referenced other QBs the Packers have drafted, including second-rounder Brian Brohm, in what was Rodgers’s first year as a starter. Ron Wolf, the legendary former Packers GM, established the organizational tenet of drafting a QB a year, but Love is the first they’ve taken in Round 1 since Rodgers.

Love is viewed as a raw prospect with incredible arm talent—former NFL scout Daniel Jeremiah described him as the QB who would win a game of “H-O-R-S-E” among this year’s draft class—but in need of development, particularly with his decision-making. He’ll have time to do that in Green Bay, just like Rodgers, who sat for three seasons until the Favre retirement (then unretirement and trade to the Jets) opened the door for him to become the starter.

A first-round QB sitting for that long, though, is the exception—especially one the team has traded up for. When the Packers went on the clock just before 11:30 p.m. ET on Thursday night and selected Love, they were putting Rodgers on the clock, too.