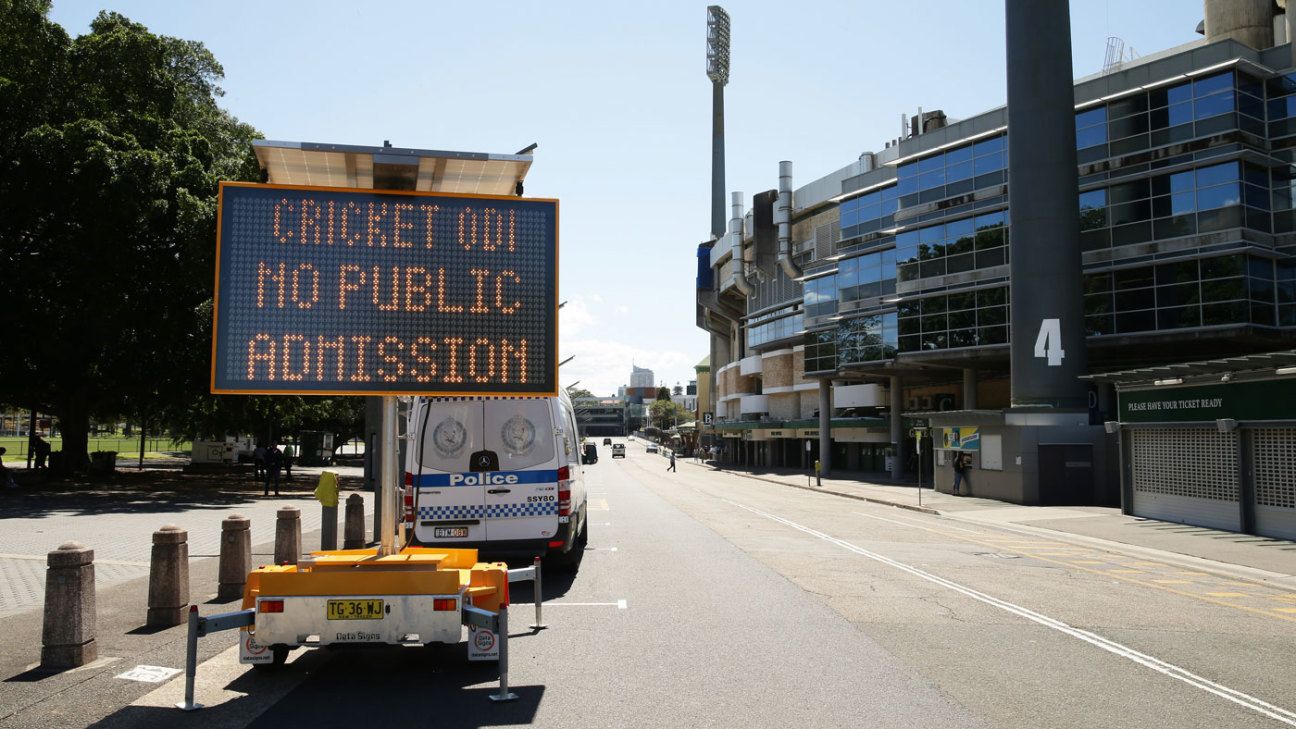 International exemptions to allow an India touring party to arrive in Australia next summer would be seriously considered by the federal government in the event of wider travel bans, strongly suggesting that Cricket Australia will be able to avoid losing up to A$300 million in revenue in the wake of the coronavirus pandemic.

While the vast majority of CA’s staff continue to reel from being asked to stand down on 20% of their regular pay from next week, while executives and a skeleton staff remain on 80% of their salaries, the governing body is understood to have received highly encouraging news about their outlook, at least as far as the lucrative India tour is concerned.

On Friday, the Australian prime minister Scott Morrison announced work on establishing a set of national principles for sport and recreation to assist state governments. “What is a safe way to be able to do that, and to get as much consistency as we possibly can across all the states and territories,” Morrison said. “That was strongly supported today by all the states and territories, having something along those lines they would find very helpful.

“In terms of the big codes – AFL, NRL, things like that – they’re both working through states and territories presently. And what we’ll be doing, and particularly what the medical expert panel will be doing, will be drawing their proposals together. My understanding is that they have already had quite a lot of expert advice going into their plans. That will probably present a lot of the homework that needs to be done to support the expert panel in setting out what some of those principles are.”

Governments both in Australia and abroad have asserted the importance of finding ways for sport to return, not only as revenue raisers for sporting bodies and broadcasters but also as a means of aiding the morale of the wider public. The ECB chief executive, Tom Harrison, is believed to have hammered home this message to Kevin Roberts and other board chiefs during conference call discussions this week, and it will be especially true if restrictions on large public gatherings mean that sport can only be viewed via television screens for quite some time.

Such a scenario would likely leave CA with a hole of around A$50 million in its annual revenue of nearly A$500 million, but nowhere near the sort of blow they could have expected without being able to welcome India for a series of Test and limited overs matches due to pull the organisation out of the low point of its four-year revenue cycle.

It will also raise further questions about how and why the CA chief executive Roberts – in moves endorsed by his board – chose drastic measures to stand down his staff a little more than a week ago while also pushing for deep cuts to the money CA distributes to its state association owners and the players represented by the Australian Cricket Association. CA is believed to have been advised by its auditors at PricewaterhouseCoopers that it is likely to qualify for the government’s JobKeeper scheme.

On the players’ front, board to board meetings between a CA delegation of chairman Earl Eddings and board directors Michelle Tredenick and Paul Green, and an ACA cohort of its president Greg Dyer, chairman Shane Watson and board member Neil Maxwell, are believed to be imminent.

However the states have been frustrated not only by a lack of financial information being provided but also by being asked to deal formally not with Roberts but his chief operating officer, Scott Grant.

Information handed over by CA so far is believed to have been heavy on graphics and pictures but light on detail, not recalling a financial document so much as a brochure. Similar handouts were delivered by CA to the ACA during the 2017 pay dispute when Roberts led the governing body’s effort to break the players’ revenue sharing model until he was sidelined late in the process due to time running out, leaving the final dealings to his predecessor James Sutherland and also the former team performance manager Pat Howard.

While the ACA is a partner in the game with CA, the state associations’ standing as CA’s structural owners and revenue beneficiaries is contributing to a rapid rise in frustration with the central governing body’s approach. Alienation of the state associations was one of the strongest themes running through the independent cultural review of CA that took place in 2018 in the wake of the Newlands ball-tampering scandal, an area that Roberts had previously been directly responsible for as CA’s head of people and “One Team”, ostensibly devised to bring all parties closer.