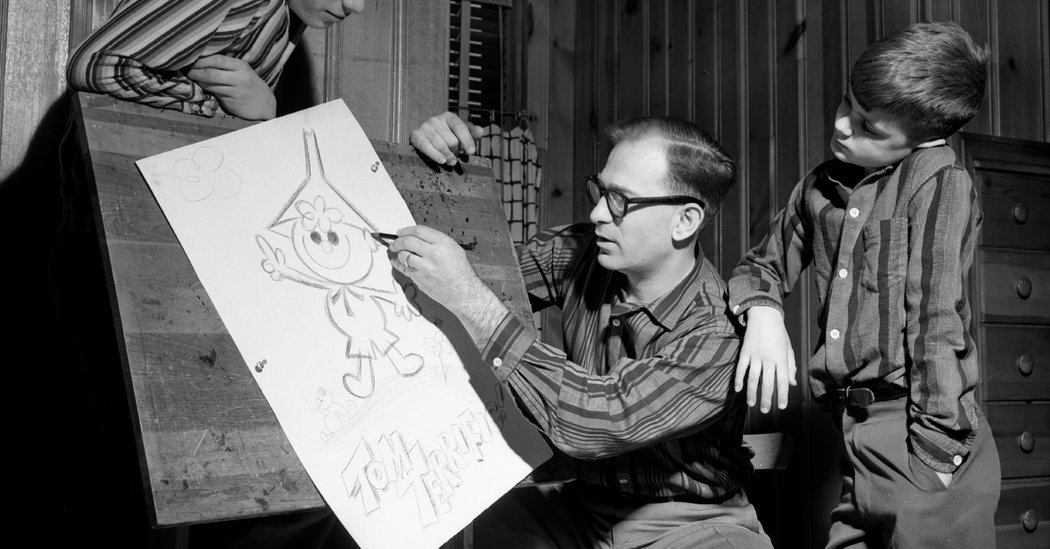 Gene Deitch, an Oscar-winning animator who created the early television cartoon “Tom Terrific” and went on to make countless cartoons and film versions of popular children’s books for more than half a century, died on April 16 in Prague, where he lived. He was 95.

Mr. Deitch’s vast output included shorts shown ahead of feature films in theaters when that practice was common, cartoons for TV’s black-and-white era, and works aimed at the grandchildren of his earliest fans. His films often showed a subtle sophistication beneath a seemingly simple premise and design.

There was, for instance, his “Nudnik” series, made in the mid-1960s and discovered by later generations when it aired on Cartoon Network in 1996. The title character was a sad-sack type, but, like Charlie Chaplin and Nudnik’s other predecessors in the art of droll comedy, there was a humanity in his haplessness.

“Nothing ever goes Nudnik’s way,” Tom Maurstad wrote in The Dallas Morning News in 1996, “but he keeps on going, creating little moments of improbable beauty along the way.”

There was a similar complexity in Mr. Deitch’s short “Munro,” an animated version of a Jules Feiffer story about a 4-year-old who is drafted into the Army and tries in vain to convince various authority figures that he is just a child. In a little under eight and a half minutes, the film mocks the military mind-set and empty jingoism while creating a picture of an overwhelmed young boy that could melt the hardest heart.

For “Munro,” which won the Oscar for best animated short subject in 1960, and for many of his other projects, Mr. Deitch (pronounced “dych”) essentially had to master someone else’s artistic style. He made his film version of “Munro” look like Mr. Feiffer’s drawings. The same was true of some of his early work for the animation studio United Productions of America, known as UPA, in the 1940s.

“That’s the basis of my work,” he told Gary Groth, a comic book editor and publisher, in a 2008 interview. “I’ve learned how to recreate anybody’s drawing style. I keep telling people there’s no such thing anymore as a Gene Deitch style.”

“Our secret aim,” he told The Chicago Tribune in 1985, when he was creating short films based on children’s books for Weston Woods Studios,“is to give the impression that the author has personally made the film.”

Eugene Merrill Deitch was born on Aug. 8, 1924, in Chicago to Joseph and Ruth (Delson) Deitch. He was, it seems, born to be an animator.

“I made little kid newspapers, using carbon paper, hectograph gelatin and mimeograph stencils,” he wrote in “How to Succeed in Animation” (2001), a mix of autobiography and advice. “I put up a bedsheet on the wall and made a slide projector out of a shoe box, with a toilet paper tube and a magnifying glass as a lens. I made little comic strips.”

Mr. Deitch grew up in Los Angeles, and his gear became more sophisticated. “All those things,” he said, “the drawing, the writing for an audience, the love of technical gadgetry related to putting on a show, all eventually came together to prepare me for becoming an animation director.”

But it was his love of jazz that was his entree to the business, which was tough to crack because there was a cartoonists’ union.

In 1945, after graduating from Venice High School and serving in the Army during World War II, Mr. Deitch was on the art staff in the sales promotion department at CBS when he sent some drawings to The Record Changer, a jazz publication.

The magazine published them, and more followed. (His Record Changer drawings were published in a book, “The Cat on a Hot Thin Groove,” in 2003.) There were jazz fans at UPA, and he ended up there as an apprentice designer.

Mr. Deitch worked on safety films for the military and some of the earliest Mr. Magoo cartoons. He moved to a Detroit studio for a time, but in 1951 UPA lured him back to help open its New York office. Among his biggest successes there was a series of animated commercials for the Brooklyn beer Piels, with Bob Elliott and Ray Goulding — the comedy team Bob & Ray — providing the voices.

“The beer was dreadful,” Mr. Deitch wrote, “but the commercials boosted its sales phenomenally.”

In 1956, CBS hired him to manage Terrytoons, a venerable cartoon studio it had just bought. His signature creation there, in 1957, was Tom Terrific, the hero of a serial cartoon broadcast as part of the children’s show “Captain Kangaroo.”

Mr. Deitch, though, found the atmosphere at Terrytoons hostile.

A project on his wish list was to turn Mr. Feiffer’s story of the drafted 4-year-old into an animated film. He made a deal with William L. Snyder, a producer who had founded Rembrandt Films in Prague, and “Munro” got made.

Mr. Deitch’s son Seth, who was 3, provided the voice of the title character. (“To this day my favorite fun fact about myself is that I starred in an Oscar-winning movie,” Seth Deitch said by email. “It is a claim that being able to prove true has won me a number of rounds of drinks.”)

Part of the deal with Mr. Snyder was that Mr. Deitch had to go to Prague to work on Rembrandt films there. On his first trip, Mr. Deitch met the production manager at Mr. Snyder’s studio, Zdenka Najmanova.

“She could charm the spots off a Dalmatian,” Mr. Deitch wrote on his website. After he and his first wife, Marie (Billingsley) Deitch, divorced, he and Ms. Najmanova were married in 1964. Mr. Deitch spent the rest of his career in Prague.

Among his earliest jobs there was making new entries in the “Tom and Jerry”series of cat-and-mouse cartoons, which had been popular in the 1940s and ’50s and MGM asked him to revive in 1961. One obstacle was that none of the Czech animators he worked with had ever seen a “Tom and Jerry” cartoon. (The 12 he made have a decidedly different look from that of their predecessors.) And then there was the matter of the credits, a touchy subject in the midst of the Cold War.

“Obviously, we could not put ‘Made in communist Czechoslovakia’ on our titles,” Mr. Deitch wrote. “We were not even allowed to credit any Czechs with their true names.”

Later in his career, he made animated version of Maurice Sendak’s “Where the Wild Things Are” (1975), Diane Paterson’s “Smile for Auntie” (1979), Tomi Ungerer’s “Moon Man” (1981) and numerous other well-regarded children’s books.

Seth and Kim Deitch and another son from Mr. Deitch’s first marriage, Simon, are all illustrators. In addition to his sons, Mr. Deitch is survived by his wife, a granddaughter and a great-granddaughter.

In a 1975 interview with The New York Times, Mr. Deitch, who often made the soundtracks for his films in a home studio, talked of his affection for Prague, whose history goes back centuries.

“Where else could you come out of a studio,” he said, “make a cup of coffee at your own stove and look out at that old tower, where a real alchemist used to work at turning base metals into gold?”