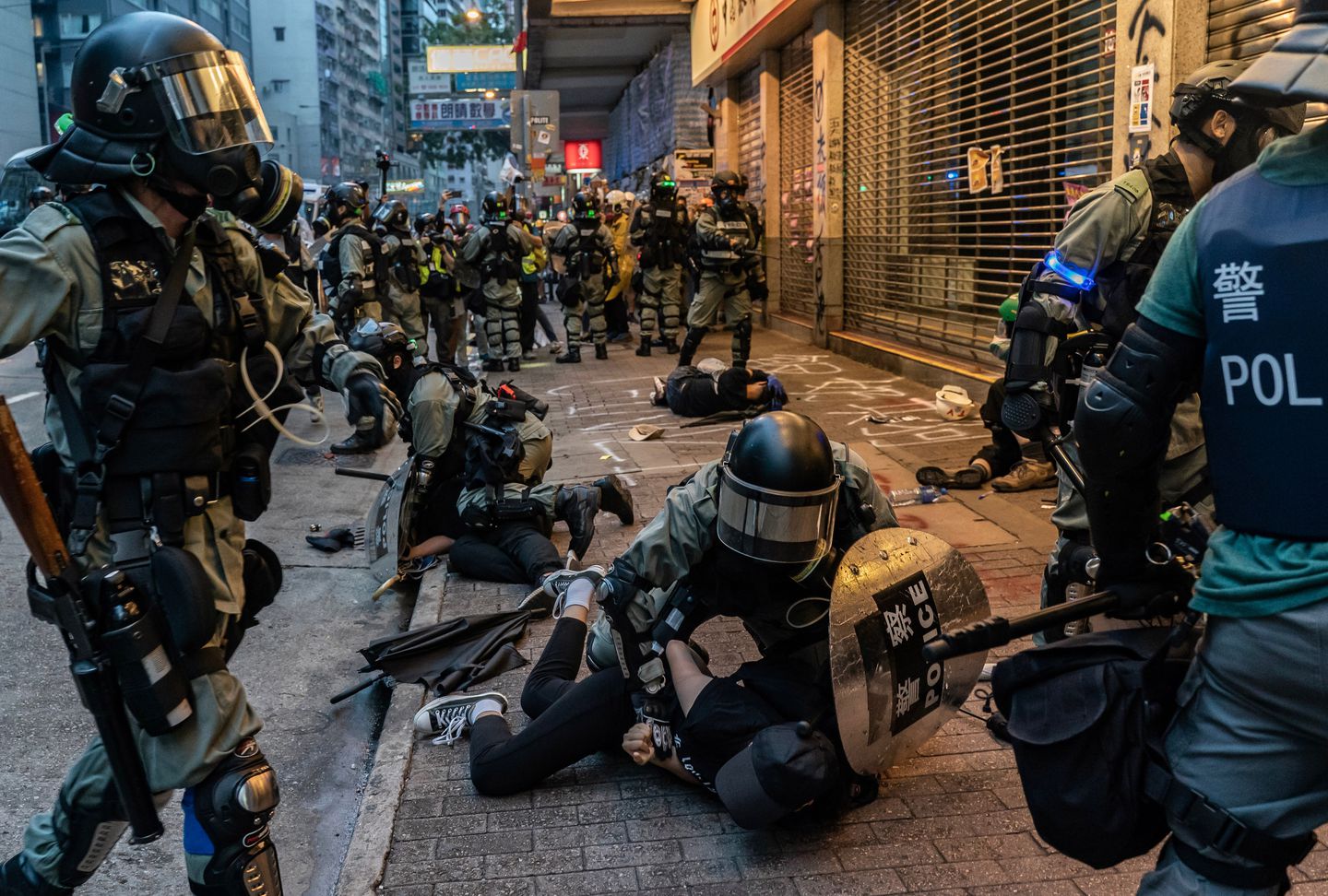 The arrests buttressed a week of coordinated actions by Beijing that experts say have redefined the status of Hong Kong. The effect was to demolish the “one country, two systems” framework that prohibits Beijing’s involvement in local affairs and is supposed to afford the financial center a high level of autonomy.

“The very important story is not my arrest,” Lee, who helped draft Hong Kong’s mini-constitution, the Basic Law, said in an interview. “What really concerns me is that the basic promise of Hong Kong has been completely changed.”

With the world distracted by the novel coronavirus pandemic, China has carried out a power grab in the former British colony, whose way of life it had pledged to preserve until 2047. In recent days, authorities have said for the first time that Beijing’s representative offices in the territory can “supervise” Hong Kong’s internal affairs — a step that legal experts say violates its constitutional firewall with the mainland. The Basic Law stipulates that the city should run its own affairs, including the police and immigration system, apart from defense and foreign relations.

Beijing officials also called for Hong Kong to introduce a national security law — shelved when an earlier attempt at its introduction sparked massive protests in 2003 — and reached further into the city’s legislature with attacks on pro-democracy lawmakers.

The shift “signals the death of the ‘two systems,’ ” said Eric Cheung, a legal scholar at the University of Hong Kong. “It is quite clear that they are now bringing the mainland system, the mainland idea of supervision and rule of law, here.”

The upshot is that the Hong Kong the world knew — a capitalist enclave where political freedoms were protected and the rule of law applied — is severely compromised.

As Washington prepares its annual report on the Hong Kong Policy Act, the legislation that allows the United States to treat the territory differently from mainland China and underpins Hong Kong’s status as a financial center, China’s actions raise an urgent question: How long can Hong Kong be seen as apart from the mainland?

Western diplomats in the city now worry that its institutions have become irreversibly co-opted by Beijing. The immigration department has emerged as a particular weak point, along with the police. Western businesses fear they will be caught up in a crackdown that until now has largely affected foreign activists, journalists and academics, the diplomats say, undercutting Hong Kong’s future as a place to do business.

“There has been absolutely no dialogue or reconciliation over the events of last year,” said a senior Western diplomat in Hong Kong. “No one can see a path forward.”

A spokesman for the Hong Kong government, in response to questions from The Washington Post, reiterated that the territory has a “high degree of autonomy” and has complied with the Basic Law since its return to China in 1997.

“The ‘one country, two systems’ principle has been fully and successfully implemented,” the spokesman said.

Protests gripped Hong Kong last year over a now-withdrawn bill that would have allowed extraditions to mainland China. As the unrest broadened into a push for full democracy, months of sometimes-violent clashes ensued that reshaped the relationship between Hong Kong’s people and the police, whom many now view as a political force executing Beijing’s orders.

The demonstrations also provoked warnings from Beijing of an impending crackdown as well as a reshuffle of its representative offices in the territory.

The immigration department began denying certain individuals visas or entry to Hong Kong for unstated reasons. The Post has tallied at least nine cases since September in which foreign journalists, activists and academics were told they could not enter Hong Kong after arriving at the border or were denied employment visas.

“She seemed utterly clueless and didn’t know who I was,” said Roth of the immigration officer who handled his case. “When finally the decision came and I asked her why I was being denied, she kept repeating it was for ‘immigration reasons.’ ”

An immigration officer in Hong Kong said that decisions involving “sensitive” people seeking to enter the territory are not made by individual officers, who are usually empowered to grant or refuse permission, but rather a mandatory consensus decision. He declined to say who issued the instructions.

“Whoever [Roth] met at the counter, the decision would have been the same,” he said.

Roth had visited Hong Kong in the past and as an American should have been allowed 90 days’ visa-free entry. Human Rights Watch was among the organizations Beijing said in December that it would penalize in retaliation for U.S. legislation that supported democratic aspirations in Hong Kong.

The Hong Kong government has said it cannot comment on individual cases or reveal the circumstances of their denial. In response to The Post, a spokesman for the government added that an “individual case does not have any bearing on the overall policy” of Hong Kong to “welcome and facilitate” visitors and said it rejected about 50,000 people last year.

The blurring of Hong Kong’s borders intensified in February when Chinese government officials told Wall Street Journal editors that three of their reporters, expelled from mainland China, should also steer clear of Hong Kong as they would be refused permission to work there, according to people familiar with the matter. Those instructions were never made public by the Journal. A spokesman for Dow Jones, the Journal’s publisher, declined to comment.

The city’s government has said it respects press freedom but has not specifically addressed calls to clarify its purview to determine who can enter or work in Hong Kong.

“The unfortunate thing is that they can’t do anything about Beijing’s interference and they cannot explain it, so the only thing they can do is reiterate that nothing has changed,” said Charles Mok, a Hong Kong lawmaker who represents the city’s technology sector.

Concerns were mounting even before the protests, Mok said. In the summer of 2018, he and other officials met representatives of a large U.S. social media company that was considering building a data center in Hong Kong.

“In our meeting, we were assuring them for almost two hours that the rule of law in Hong Kong still had primacy, but their main concern was interference from China and whether it would become an issue,” he said.

The company’s officials were slated to visit Hong Kong later that year to meet government representatives, Mok said. They canceled their visit when news broke that Hong Kong refused to renew a work visa for Victor Mallet, the Financial Times’ Asia news editor, who had hosted a talk with a Hong Kong independence activist.

In response to questions from The Post, Facebook said it meets regularly with stakeholders around the world to discuss business and investments and in 2018 was in talks about a new office in Hong Kong. This month, U.S. officials allowed a Google high-speed Internet link to Taiwan to proceed only if it bypassed Hong Kong, citing national security concerns.

For many observers, a more concerning development came last week, when China’s top office in Hong Kong said it was effectively above the city’s mini-constitution and unbound by an article that bars the Chinese government from involving itself in the city’s local affairs. The Hong Kong government responded by issuing three conflicting statements within a few hours Saturday. Its final version agreed with the premise set down by the Chinese liaison office.

This week, the official in charge of the ministry that handles affairs with mainland China was replaced in a wider cabinet reshuffle. He was replaced by the immigration director, Erick Tsang, who displays photos of Chinese leader Xi Jinping in his office.

Lau Siu-kai, vice president of the Chinese Association of Hong Kong and Macao Studies, which advises the central government on Hong Kong matters, said the past few days’ events represented a “hard-line approach” to the city’s political crisis and aimed to reinvigorate the “fighting spirit and patriotic forces.”

Lee, the veteran democracy leader, said the developments leave no doubt that Beijing’s plan is to “squeeze” Hong Kong.

“The Communist Party is ruling Hong Kong, that is clear,” Lee said. “Perhaps [the situation] presents an opportunity and can invite the U.S. government and others to look at the Hong Kong situation afresh.”

Tiffany Liang contributed to this report.