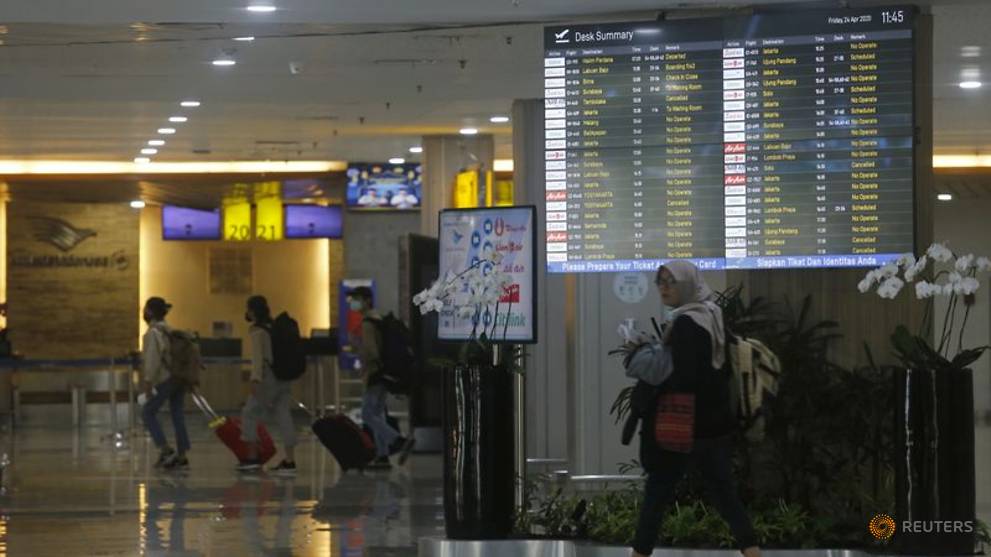 JAKARTA: The moment Permana set foot in the Kalideres bus terminal on Thursday (Apr 23) afternoon, he knew his chances of getting to his village in Banten province’s Serang regency was slim.

There were already 300 people at the West Jakarta terminal when he arrived and tickets were selling out.

The only bus available would leave at 9pm and its ticket cost more than three times its normal fare.

“I decided to gamble,” Permana, who refused to give his full name, told CNA.

The 23-year-old janitor said his heart was racing all night. He was nervous that his bus might not be able to depart as scheduled, as Indonesia’s travel ban to stop the spread of COVID-19 would come into effect three hours later at midnight.

Under the ban, borders would be closed and all private vehicles and buses cannot leave Jakarta and its surrounding suburbs. This has effectively prevented Indonesians from travelling home for the Muslim holiday Idul Fitri.

Permana said he was sweating and feeling restless while he was waiting at the terminal’s lounge room. “I kept checking my watch. I kept asking (officials) if it was possible to leave ahead of schedule,” he said.

Permana said his family back home insisted that he should return to his village for Ramadan.

“They said it would be better to spend the fasting month at my village together as a family. We can pray together and break fast together. They said Idul Fitri wouldn’t feel complete if one of their sons are not home,” he said. “As a son, I cannot go against my parents’ wishes.”

Adding to his anxiety was the fact that public transportation in Indonesia is usually unreliable. Indeed, his bus eventually hit the road 20 minutes behind schedule.

Police had erected a checkpoint on the major toll road connecting Jakarta and Banten province. The checkpoint was located about an hour away from the terminal, but traffic had reduced to a crawl.

“When I saw how congested the toll road was, my heart sank. The road was jam packed with cars and buses. Everyone was trying to beat the clock and pass the checkpoint before midnight,” he recalled.

As the bus moved closer to the checkpoint, Permana saw police officers and traffic police cars with their red and blue lights flashing.

With loudspeakers, the police alerted travellers that the ban would soon be imposed. Permana checked his watch. It was 11.40 pm.

The Indonesian government was initially reluctant to restrict people from travelling to their hometowns and villages during Ramadan, despite warnings from health experts who said that allowing millions in the world’s biggest Muslim-majority country to travel could hasten the spread of COVID-19.

Coordinating Minister for Maritime and Investment Luhut Pandjaitan said the government was thinking about the thousands of people who were laid-off or lost their income because of the pandemic.

Mr Pandjaitan, who is also the interim Transportation Minister, said until government aids and benefits were distributed, it would be hard for the unemployed and lower income families to survive in big cities like Jakarta.

“The government’s strategy is like a military strategy, a strategy which are enforced in stages, carefully prepared and thought through,” the retired army general told a press conference on Tuesday when announcing the homecoming ban.

“Now that the social aid is ready and benefit programmes implemented we decided to go ahead with the full ban on homecoming exodus.”

Transportation Ministry spokeswoman Adita Irawati told a press conference on Thursday evening that under the ban, all vehicles are not permitted to leave or enter Jakarta and its eight suburbs as well as the so-called red zone areas where local transmissions had occurred.

But the ban does not extend to trucks carrying logistics, ambulances and essential services workers.

Across Indonesia, inter-provincial travel is not permitted for all areas which have imposed social restrictions and considered as red zones.

A temporary ban has also been placed on domestic and international air and sea travel until early June. Inter-city passenger train services were halted as well.

On Friday, massive gridlocks were observed on toll roads connecting Jakarta and other provinces to the east and west as vehicles were being scrutinised and some redirected at the checkpoints.

Mr Budi Setiyadi, Transportation Ministry’s director-general of land transportation, noted that while some people were trying their luck and tried to head to their hometowns and villages.

But there are also people who live in Jakarta and work in factories located just outside of Jakarta.

“Police in the field will scrutinise every vehicles. We will let them through if they can produce documents showing that they are working in essential services,”Mr Setiyadi told the Thursday press conference.

Not every traveller managed to leave Jakarta in time, before the travel ban kicked in.

Gumilang, who wanted to drive home to Majalengka, West Java, missed the deadline by just 15 minutes.

“I tried to talk my way out of the situation. I told the officers, please let me pass. I had been stuck in traffic for two hours and I was only late for a few minutes. But they wouldn’t let me through,” he told CNA.

Gumilang, who also refused to provide his full name, said police instructed him to exit the toll road. Along the way, only roads leading back into the city were open.

“I tried to find smaller roads hoping they wouldn’t be blockaded by the police. All the roads were congested and I was already tired of being stuck in traffic for hours, so I decided to head home.”

Amalia said she had booked three return tickets for her family to fly to West Sumatra in mid May.

“We bought the tickets back in February when there were no confirmed coronavirus cases in Indonesia,” she told CNA.

“We were really looking forward to spending time with my father-in-law. This year would be the first Ramadan since my mother-in-law passed away, so we felt it was important for him not to be alone.”

As the cases spread across the country and the number of infection grew, she became increasingly worried that her family would not be able to go to her husband’s home village.

“But at least now I can cancel my flight and ask for a refund, which I hadn’t been able to do until the government officially forbid people to travel,” she said.