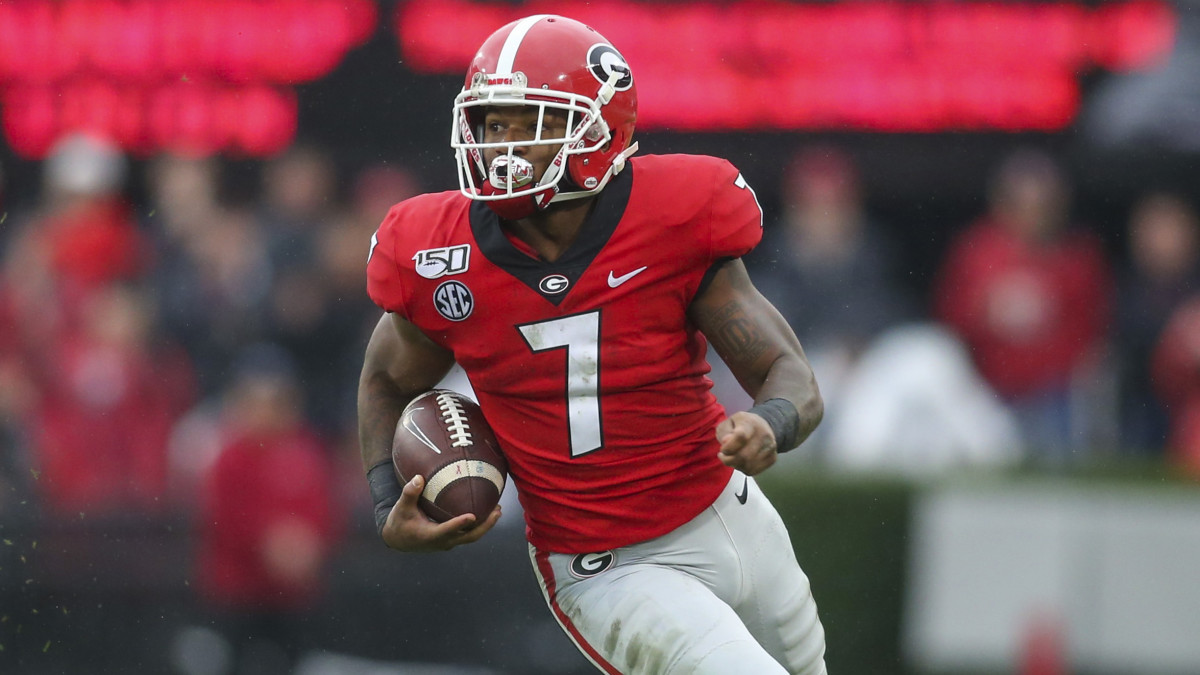 Just a couple hours away …

• Here’s something crazy: I’m starting to hear more about teams looking at running backs, with Miami, Seattle and Kansas City among those in the mix to take a swing on one of the guys in the top group. Would they do it in Round 1? We’ll see. The consensus I’ve gotten has Georgia’s D’Andre Swift as the top guy. But someone whose name keeps coming up is LSU’s Clyde Edwards-Helaire. I’ve had more than a couple guys say they’d turn on the Tigers’ tape to watch someone else, and be drawn to the diminutive but hyper-versatile back’s skill set. One team mentioned him to me as a potentially perfect sidecar to Tom Brady in Tampa. The backs could start coming off the board late in the first, or maybe with these teams dealing back into the top of the second round.

• Another hot name: Alabama WR Henry Ruggs. Part of that is the outrageous speed and athleticism, which makes him the sort of weapon to fit an era in which Tyreek Hill has emerged as the No. 1 receiver for a championship team. Another is how highly Nick Saban and his staff talk about him. I had him as the second receiver to go in my mock, behind Jerry Jeudy and ahead of CeeDee Lamb. I wouldn’t be shocked if he was the first to go. And the Chiefs and Saints could just take the temperature on a very aggressive move up (I’d say that’s unlikely, but who knows?).

• An interesting comp I got for Isaiah Simmons from an exec today: Vikings LB Anthony Barr. I like that one, particularly because Barr had the same rep as Simmons coming out, which is that you have to have a defined plan for him. I don’t see Simmons going to one of the Patriot-connected teams picking No. 3, 4 or 5.

• Earlier this week, I gave you Alabama S Xavier McKinney and Oklahoma LB Kenneth Murray as Patriot types in the first round, along with Notre Dame TE Cole Kmet. I’ll say that I would not be surprised if they address their offensive line at No. 23, depending on how things fall.

• The Eagles’ presence at No. 21 and need at receiver could prompt some trading up from the 20s (we mentioned the Vikings as a possibility for that). And I’ve heard Justin Jefferson, Jalen Raegor and Brandon Aiyuk connected to them. But I mocked Oklahoma LB Kenneth Murray to Philly, and it wouldn’t stun me if Howie Roseman takes him (or maybe K’Lavon Chaisson, should Chaisson slip), and comes back to address the receiver spot on Friday.

• Given the love out there for Murray, LSU’s Patrick Queen and Texas Tech’s Jordyn Brooks, it’ll be interesting to see if the Ravens—who’ve done a ton of work on the linebackers—move up to try and get past the Eagles, Saints or Dolphins for one. (It sounds crazy, but Queen could wind up going as early as No. 15 to Denver).

• Just as the tackles could prompt movement at the top, they could do the same later in the round. The Titans have investigated a move down, but I’m told they’ve also looked at moving up from No. 29, maybe to land a right tackle like Georgia’s Isaiah Wilson (who actually went to the same high school as Dolphins coach Brian Flores, and may be in play at No. 26 if Miami decides to double up at tackle). The Packers, picking 30th, are another team that’s looking at options to go up for a tackle. I think the run on the position starts with Iowa’s Tristan Wirfs landing with the Giants at No. 4. And it may not stop until the end of Thursday night.

• I don’t think Trent Williams will get traded until Friday, and Washington does have suitors. When the deal is done, my belief now is that Williams goes for a third-round pick, with perhaps a late-round pick going back with him. All the action on the tackles could, of course, affect the market Washington has for its 10-year left tackle, who goes all the way back to Mike Shanahan’s days in D.C.

• For what it’s worth, the Raiders have done a lot of work on Utah State QB Jordan Love. And they’ve aggressively looked at trading down from No. 19 (although the move back could also result in Vegas winding up with a corner later on).

• Enjoy the show everyone! And be sure to check out the MMQB, MAQB, Mailbag and GamePlan from this week (all here) to get you full ready for everything that’s about to go down.