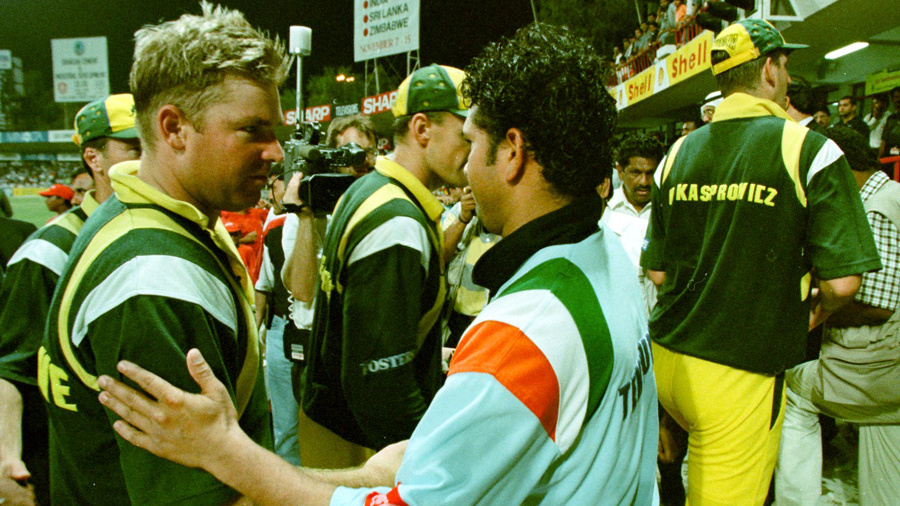 It is said often that cricket is an individual pursuit masquerading as a team sport.

On April 22, Sachin Tendulkar proved and disproved it at the same time. Having fielded and bowled in the crazy heat of a Sharjah April afternoon, Tendulkar dipped his feet in ice to manage the blisters, laced up, went out, scored 143 of the 242 that came while he was at the wicket, and dragged, like a lioness does her young cubs, the Indian team into the final. And yet Australia remained unbeaten in the league stages: India threatened to win, but achieved only the bare minimum to qualify: a higher net run rate. And yet it was clear Australia would much rather they faced New Zealand in the final than a genius at his physical and technical prime masquerading as a team?

Who really won on April 22 then? The individual or the team?

The answer we will be able to find out only on April 24. This has been a weird old month for these two teams. Just before they flew into Sharjah, India and Australia participated in a tri-series in India where India won all the league games but lost to Australia in the final. Now they are looking to pay back in kind. These two teams have played each other so often in the last month – and have been around when the other team is playing the third side in the competition – that they must have sussed each other out. Australia have repeatedly got the better of the kinds of Ganguly and Azharuddin, but there is a genius yet to be tamed.

If he is not scoring runs, he is taking wickets; if he is doing neither, Australia win. The only time Australia won despite Tendulkar scoring runs – and it was his personal best in ODIs – was on April 22. Did they really win, though? While it will now give them confidence that they can beat India even if Tendulkar fires, do they really want to face Tendulkar one more time? On his 25th birthday, in a tournament final.

He is an ODI revolutionary. Having started off as someone unconventional who was deployed in the latter stages of ODI innings, Michael Bevan has now begun to present himself as a more complete one-day batsman. Starting last April, he has scored three centuries, which is a significant achievement for someone who doesn’t bat in the top four. He has been in red-hot form this April: his lowest score has been 15 not out, and he has crossed 50 in six of his nine innings, including a hundred in his last.

Tendulkar might have put every Indian player to shade in the last few years, but with 14 wickets in six matches, Ajit Agarkar promises to be a valuable player in one-day cricket. He has not yet fully recovered from the injury that kept him out of the last league match, but the word is that India will play him in the final.

Australia were rattled by the Tendulkar onslaught, but they are not the ones to change their winning combination so easily. They will back their side although bowling back-up won’t hurt them.

Agarkar is likely to replace Harvinder Singh for India, and India might look to the left-arm spin of Rahul Sanghvi after the young offspinner Harbhajan Singh went for 63 in his eight overs in the last league game.

It is hot and dry in Sharjah as expected for the month of April, and the pitch is likely to be just as flat as it was in the last league game. Expect heat, runs and no respite for the bowlers. Which makes it an interesting choice for the captain winning the toss: India will be emboldened to chase after the dew came to their aid in the last game, but this is the final and runs on board always matter.