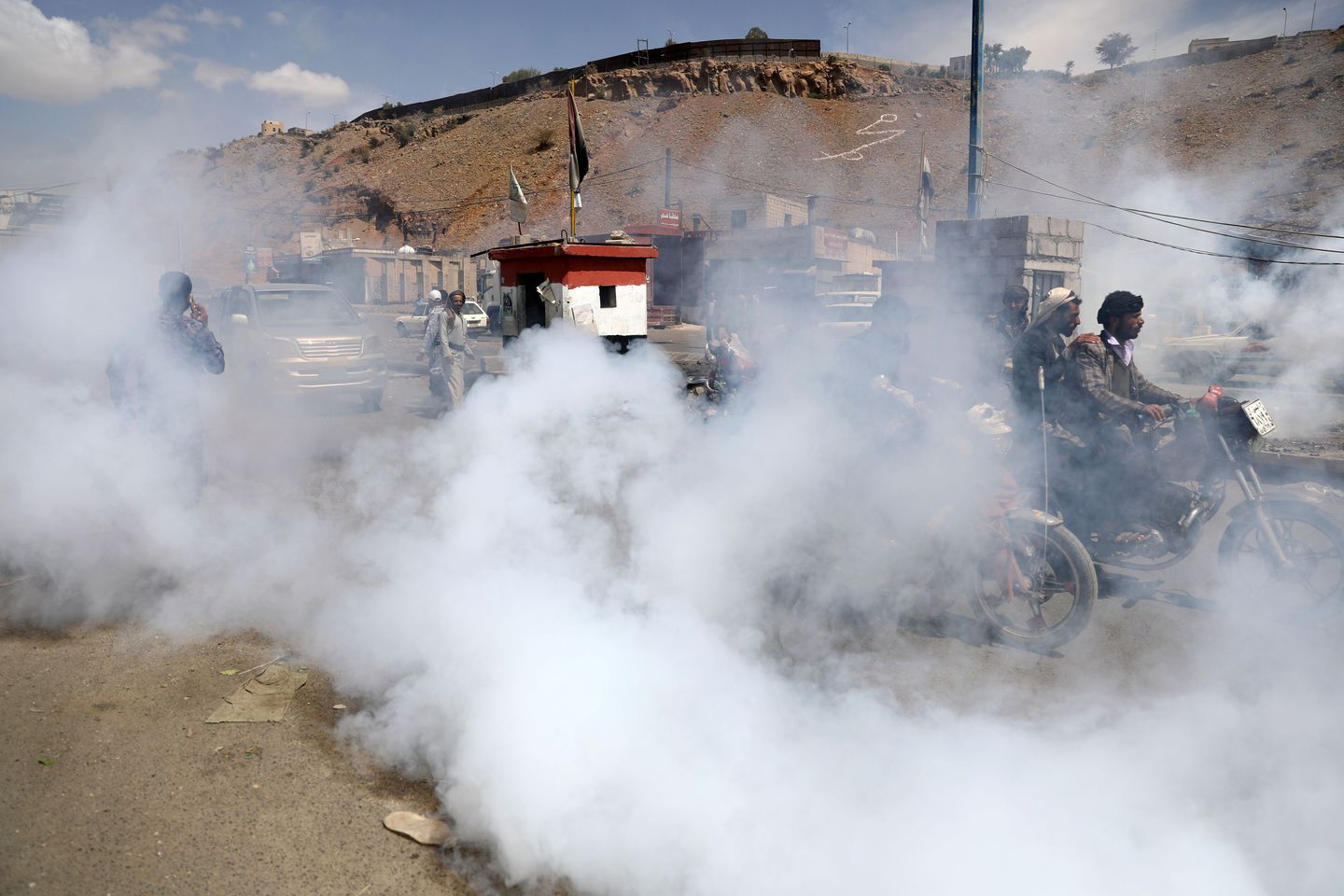 The warnings come after the Trump administration canceled tens of millions of dollars in humanitarian aid last month after accusing Yemen’s Houthi rebels, who are aligned with Iran, of diverting and disrupting the aid. President Trump then decided last week to withdraw funding for the World Health Organization, which plays an outsize role in Yemen.

Critics say the U.S. funding cuts are politically motivated and reflect American animosity toward Iran. International aid groups are now urging the administration to restore the funding for Yemen. They argue the United States has a moral responsibility to help the country because U.S.-supplied fighter jets, bombs and other weapons have been used by the Saudi-led military coalition in Yemen to destroy scores of hospitals, clinics and other civilian facilities.

“It is staggering to watch countries, like the United States, liberally supply arms for the war and then cut support for health services,” said Scott Paul, a humanitarian policy adviser for Oxfam America. “There is no excuse for any country, least of all one that has fueled the conflict like the U.S., to hold back funding for lifesaving activities at such a critical time.”

In explaining the cuts, a spokesman for the U.S. Agency for International Development said they were due to “long-standing Houthi interference in humanitarian operations.” This includes diversion of aid “away from the most needy,” which has made it uncertain that U.S. aid “will get to those who need them most,” said the agency spokesman, who spoke on the condition of anonymity because he was not authorized to speak to the media.

After more than five years of war, Yemen has earned the label of the world’s most severe humanitarian crisis with about 80 percent of the population now relying on aid. The war has shattered the health infrastructure. The immune systems of millions of Yemenis have been weakened by widespread hunger and malnutrition, as well as diseases such as cholera, dengue and diphtheria.

“As a result, epidemiologists warn that covid-19 in Yemen could spread faster, more widely and with deadlier consequences than in many other countries,” Mark Lowcock, the United Nation’s top official for humanitarian affairs and emergency relief told the Security Council. “We are, in other words, running out of time.”

Two weeks ago, Yemen reported its first and only confirmed case of covid-19, but aid workers suspect the total is higher.

USAID officials said last month they would initially suspend $73 million in aid for the northern part of the country, which is controlled by the Houthis. But Oxfam and other aid groups say the cuts could total as much as $200 million. Two U.S. lawmakers, Reps. Eliot L. Engel (D-N.Y.) and Adam Smith (D-Wash.), have urged the administration to keep aid flowing to Yemen.

The United States had also pledged roughly $27 million for the fiscal year, starting in September 2019, for WHO health and nutrition programs in Yemen, according to USAID.

The USAID spokesman said the agency’s programs continue to operate in southern Yemen. The United States, he said, would “continue to support critical, lifesaving activities” in northern Yemen.

But the assistance that has been cut could be vital for the survival for countless people. An air and sea embargo imposed by the U.S.-backed coalition has helped trigger shortages in medicines, medical equipment and other health supplies. Today, half of all medical facilities are closed, according to Oxfam, and millions of Yemenis have lost access to steady water supplies and soap.

There are roughly 700 intensive care unit beds, including 60 for children, and 500 ventilators to serve a population of about 30 million, according to the charity Save the Children.

U.S. funding cuts are already having an impact on some health facilities, according to aid workers. As a result, the U.N. has stopped providing fuel for generators to power medical equipment and air conditioners at several health facilities in the western coastal city of Hodeidah, said Aisha Jumaan, the head of the Yemen Relief and Reconstruction Foundation. These include Al-Thawra Hospital, the largest one which serves more than 600,000 people and is preparing for possible coronavirus cases.

“These USAID cuts are being felt acutely already,” Jumaan said. “Cutting energy for a key hospital as temperatures and risk of covid-19 rise is a true recipe for disaster.”

If more programs shut down, as many as 1 million people would not receive critical supplies, including hygiene kits to protect against covid-19, Lowcock said. More than 2 million severely malnourished children could become even more vulnerable to infection because of cuts in nutritional programs, he added.

The WHO, meantime, estimates that 80 percent of the health services it provides could stop at the end of this month, including local health teams who detect disease outbreaks.

While the Houthis have taken steps to improve conditions for humanitarian operations, the rebels still impose severe restrictions on the delivery of aid and movement of U.N. staff and aid workers.

“Who is to blame? It’s the Houthis,” said a Western official speaking on condition of anonymity due to the sensitivity of the issue. “By refusing to adhere to humanitarian principles that are respected in every other country, the Houthis are condemning half the population to slow starvation.”

Oxfam and other aid groups are urging USAID to take a more collaborative approach and resume sending aid, given the threat of the coronavirus.

“A lot of organizations have decided to stay in Yemen and are working with Houthis to work out their differences,” Jumaan said. “We do not make millions of people hostage to a conflict you have with an adversary.”

The concerns over humanitarian aid have mounted as fighting continues, despite a two-week cease fire announced by the coalition of Sunni Muslim countries led by Saudi Arabia. The coalition has been battling the Houthis since 2015 in support of Yemen’s government.

In the central province of Marib, the government’s last major stronghold, residents described daily clashes between the Houthis and the government with rockets and shells raining down on neighborhoods. “Yesterday, we heard coalition fighter jets roaring in the sky,” said Fuad Ahmed Alhadaa, 45, an employee at the provincial ministry of youth and sports last Friday. “The cease-fire announcement has gone with the wind.”

Since the cease fire was declared, at least 38 civilians have been killed or maimed, including five children who were killed and six others who were wounded, Save the Children said Wednesday in a statement. In 29 cases, houses were hit, the group said.

“It is hugely disappointing that the warring parties could not even lay down their weapons for two weeks to fend off the most imminent threat Yemen is facing: a possible covid-19 outbreak,” said Xavier Joubert, the Yemen country director for Save the Children. “This demonstrates a complete lack of political will from all involved in this terrible conflict, for which civilians pay the highest price day in, day out.”

Ali Al Mujahed in Sanaa, Yemen, contributed to this report.