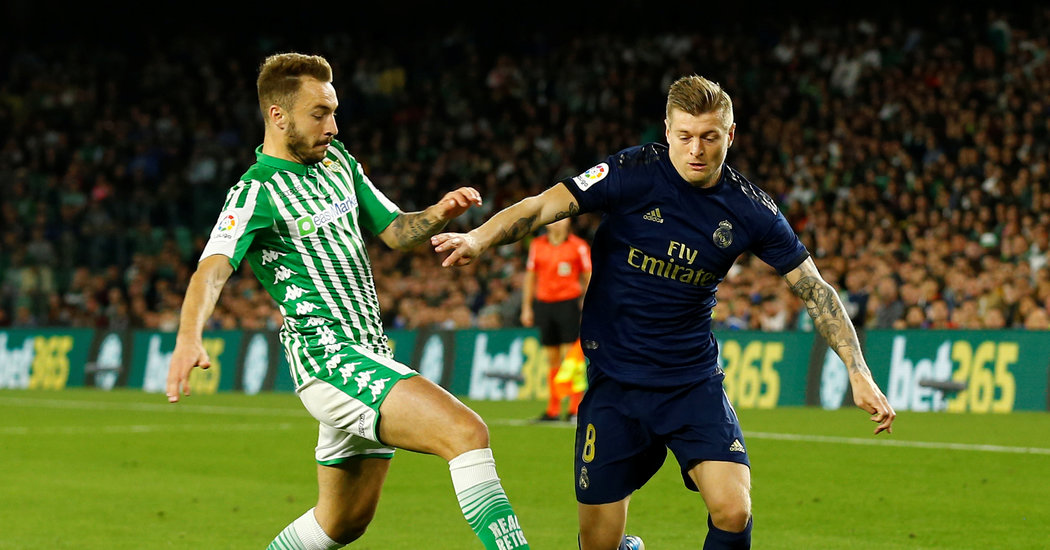 LONDON — Daily tests for coronavirus. Only two people in the gym at a time. Players dressing for practice at home.

Those are just some of the protocols La Liga, the organizer of Spain’s top two soccer leagues, deems necessary to allow even practice to take place before games resume, with a new target date of sometime in June. In Spain, like almost every other country in the world, play has been suspended for weeks amid efforts to halt the spread of the disease.

The guidelines are in a confidential 23-page document reviewed by The New York Times. They provide insight into the details of what is required to get major sporting competition restarted without compromising the health of athletes or the wider population.

The measures being formulated appear more like those required for a medical facility than for a soccer team’s training ground. But the league appears to be leaving nothing to chance. As well as the ubiquitous odor of disinfectant and the sight of individuals in personal protective equipment, there will also be a strict list of people allowed at any one time and stringent protocols.

The pursuit to get back on the field is driven by commercial reasons as much as sporting merit. La Liga’s president said calling off the season would amount to a financial catastrophe, which he estimated would cost teams in Spain’s top division as much as one billion euros (more than $1 billion).

Spain has been one of the hardest hit countries during the crisis. As of Thursday, its more than 213,000 confirmed cases were the second-highest globally after the United States, according to data from Johns Hopkins University. The number of deaths in Spain — more than 22,000 — are more than any country aside from the United States and Italy.

With that in mind, the league is aiming to start playing games without spectators in June. To get there, it has consulted with experts to devise a monthlong training protocol divided into four stages. Two days before the regimen begins, all the players, coaches and any staff deemed necessary to have contact with them will be tested for both Covid-19 symptoms and immunity to the virus.

Taken as a whole, the guidelines show the tightrope sports competitions are treading as they plan a return in the age of social distancing. Everything has been designed to limit contact, something that will jar many athletes used to the daily ritual of being part of a collective.

“The procedure drawn up by La Liga is based on the clubs being able to apply it in a confined manner in a setting that is closed off from the outside world, like a training ground or team hotel, in order to comply with the measures stipulated by the decree declaring the state of alarm,” the document says, referring to the strict restrictions imposed on the nation by the Spanish government on March 14.

Players used to having an army of staff members catering to their every need will now have to get used to a more stripped down environment.

In the first phase of the training program, they may encounter very few people. Players will be expected to arrive at the training ground at different intervals. They would be expected to be wearing protective gloves and masks until the moment they start to train. During this initial phase, only six players would be allowed on the practice field at any one time.

Clubs are advised to design training drills that require the minimum amount of equipment possible, while a maximum of two players can be allowed in the gym at the same time, and the equipment must be disinfected after each use.

Group training will only be permitted in a limited manner at first, with a maximum of eight players being permitted to train together. Those eight will not be able to mix with any of the other players, whether on the field or in the dining areas. For the final period of training, the players are expected to lodge at the team’s practice facility, which will be operated by a skeleton staff. For instance, only one cook, equipment aide and laundry attendant will be allowed on the site. The coach will be allowed to have a maximum of three assistants and three physiotherapists.

The austere, clinical nature of La Liga’s buildup to a return, also extends to downtime. When not training, players must return to their rooms and not mix with any teammates. Those that choose to stay at home are advised to not go out at any time unless they are driving to the practice field, which must always be done in the same car.

Medical officials from a number of La Liga teams had input in creating the protocol. It was prepared jointly by staff members from the league and officials from Real Sociedad, Grenada and Osasuna and reviewed by medical professionals from four other teams, including Atletico de Madrid and Sevilla.

A separate protocol for playing games behind closed doors is currently being studied. The chief executive of Germany’s Bundesliga, which appears on course to be the first of Europe’s major leagues to restart, projected 240 people would be required at each match, including players, coaching staff and broadcast professionals.