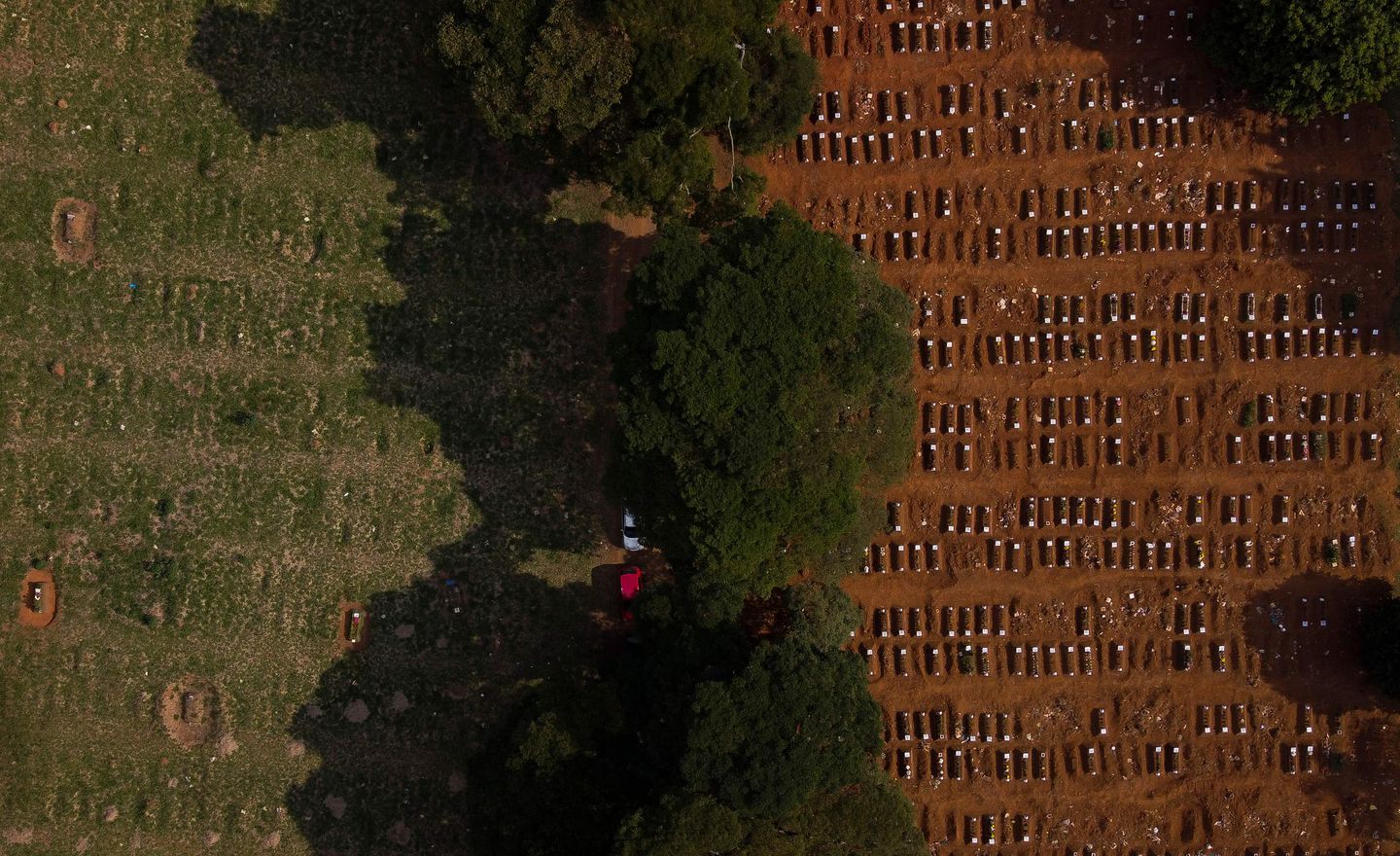 Every day brings more. The cemetery now receives around 50 bodies every day — double the average in normal times. Many are marked as confirmed cases of covid-19, the disease the virus causes. But many more say only unidentified respiratory ailment. To Pereira, they’re the unseen toll of the coronavirus in Brazil, which has officially infected 45,000 people and killed 2,900 — but unofficially many times more than that.

Imprecise and insufficient testing is a global problem, but in Brazil, it’s on an entirely different scale. Latin America’s largest country is testing people at a rate far lower than any other nation with at least 40,000 cases. It tests 12 times fewer people than Iran. Thirty-two times fewer than the United States. Hospitalized patients aren’t being tested. Some medical professionals aren’t being tested. People are dying in their homes without being tested.

The undercount has undercut pleas for social isolation and empowered skeptics such as Jair Bolsonaro. Brazil’s president dismisses the pandemic as a “fantasy” driven by “a little flu.” Bolsonaro said this month that the numbers “looked like the virus is starting to leave.” Then, last week, he fired his health minister, Luiz Henrique Mandetta, who had repeatedly and publicly contradicted the president on the severity of the crisis.

“Undercounting empowers populists to say, ‘See, things are not that bad,’ ” said Pedro Doria, former executive editor of the Brazilian newspaper O Globo. “There is a huge effort by the federal government to deny the gravity of the pandemic.”

Now Bolsonaro’s supporters are gathering in city streets to amplify his calls to reopen the economy — while data scientists are saying the problem is drastically worse than they realize.

Researchers at the Federal University of Minas Gerais have suggested Brazil has eight times more coronavirus cases than the official numbers. A research team at the University of São Paulo thinks it has 16 times more — as many as 711,000 cases.

According to government statistics, nearly 37,300 people have been hospitalized this year with respiratory ailments — four times the number at this point last year — but only half have received test results. In São Paulo, nearly 1,300 people have died of unidentified respiratory problems, compared with 50 people last year. Amazonas state has reported 193 deaths from covid-19. But its capital city is burying so many people — three times the average — that it’s digging trenches for mass graves.

“The big conclusion is that we don’t know what the real scenario is,” said Leonardo Costa Ribeiro, an economist at the Federal University of Minas Gerais. “It gives the sensation that it is more controlled, when the reality is very different.”

Domingos Alves, a data scientist at the University of São Paulo, did little to hide his anger at the chasm between how government officials talk about the virus and what the data shows.

“As a researcher, I look at the data and make analyses for the government,” he said. “But as a citizen, I’m frustrated. The government is trying to control the epidemic without the elements of how to control it because they don’t know how serious it is.

New Health Minister Nelson Teich, named by Bolsonaro to replace Mandetta, has made increased testing a pillar of the country’s response to the pandemic. He said this week the government intends to purchase 46 million tests, enough for just over a fifth of the population. He hasn’t specified when the tests will arrive or when they’ll be used.

“We are not talking about testing the entire country,” Teich said. “We are going to use the tests so that people tested will reflect the Brazilian population.”

But the obstacles will be enormous — and could portend the struggles that await much of the developing world as the coronavirus moves deeper into Latin America and Africa. A variable as basic as reliable data could become a distinguishing factor between poor and wealthy countries.

Analysts say Brazil has neither the manufacturing nor the purchasing capacity to meet the demand for tests. Its laboratories, already overwhelmed by a testing backlog, aren’t equipped to process them at scale. And in the international scrum for supplies and testing equipment, the country is losing out to wealthier nations that can pay more or leverage closer ties with China.

“Brazil could be thought of as a barometer of what could be expected in other countries,” said Marcelo Gomes, a researcher at the Oswaldo Cruz Foundation, a scientific institution. “Information is paramount. The more we have, the more we can make the population aware of what it is exactly that we are facing.”

Without that information, said Paulo Buss, one of Brazil’s preeminent public health experts, “the consequences are clear.”

The consequences were clear last month for Bruna Marques, a 24-year-old woman in São Paulo state. Her mother, diabetic, asthmatic and pregnant, had become so sick she could barely stand. She was having difficulty breathing. Her temperature had risen to 104 degrees. Two hospitals turned her away without testing for the virus.

The third, 30 minutes away, finally admitted her. But within days, she was dead, the baby was lost and the funeral was over. Marques stood over her mother’s grave, furious. All around, she said, were other families, equally mystified by the sudden deaths of loved ones.

The hospital told Marques her mother had died of acute respiratory failure, she said. For weeks afterward, she said, she has called daily, asking if it was covid-19. But she never heard anything.

“Sometimes they don’t even wait for me to say my mother’s name before hanging up,” she said. “Nobody tells me what really happened to her. It was all very fast, and we just wanted an answer. It’s inhumane.”

A gravedigger at São Paulo’s Vila Formosa Cemetery, one of Latin America’s largest, said he started noticing strange deaths in early March — weeks before Brazil’s first confirmed coronavirus death. The causes of death — pneumonia, respiratory failure — were what he would expect to see during the Southern Hemisphere’s winter, not peak summer.

“One day, I saw on the news that in all of São Paulo there had been 20 burials of coronavirus victims,” said the man, who spoke on the condition of anonymity because he didn’t have permission to give an interview. “But I knew at my cemetery alone, there had been 27.”

Pereira feels the same frustration. Some days, he can’t believe the number of people out in the street. If they were seeing what he saw, no way would they be outside. No way would there be a national debate over reopening the economy. No one would be listening to claims that the pandemic had been overblown.

Bodies don’t lie, he said. And here came another one.