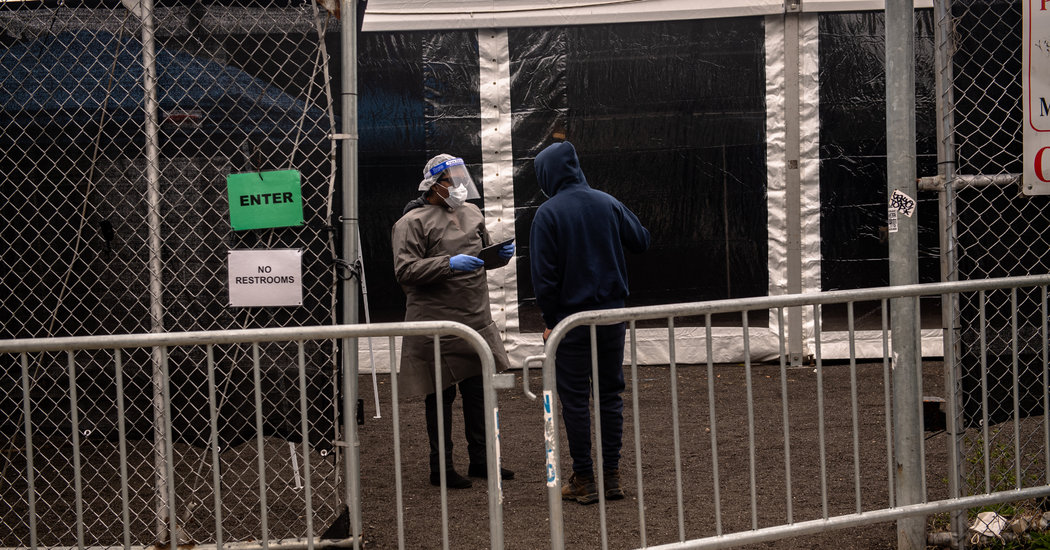 One of every five New York City residents tested positive for antibodies to the coronavirus, according to preliminary test results described by Gov. Andrew M. Cuomo on Thursday, suggesting the virus had spread far more widely than known.

The results also provided the tantalizing prospect that many New Yorkers who never knew they had been infected — possibly as many as 2.7 million, the governor said — had already encountered the virus, and survived. Mr. Cuomo also suggested the death rate was far lower than believed.

The reliability of some early antibody tests to hit the market has been widely questioned, with some — made in China without Food and Drug Administration approval — found by health officials to be deeply flawed. Researchers across New York have worked in recent weeks to develop and validate their own, with federal approval.

Accurate antibody testing is seen as a critical tool to help determine when and how to begin restarting the economy. State officials said their test could help send people back to work.

Hours before Mr. Cuomo’s presentation, a top health official in New York City cautioned against making too much of the usefulness of the test results when it comes to critical decisions over social distancing and reopening the economy, particularly in identifying immunity.

The city’s top official for disease control, Dr. Demetre C. Daskalakis, wrote in an email alert on Wednesday that the tests “may produce false negative or false positive results,” pointing to “significant voids” in using the science to pinpoint immunity.

“Given the current lack of evidence” that any blood test for antibodies is indicative of “durable immunity,” Dr. Daskalakis wrote, “it should not be used for that purpose.”

The alert, sent to medical providers and other subscribers, went on to warn that the consequences of relying on potentially false results may lead to “providing patients incorrect guidance on preventive interventions like physical distancing or protective equipment.”

The guidance from the city’s Department of Health appeared to open another rift between the city and state government.

Mr. Daskalakis, early in the outbreak, had been a strong voice arguing for social distancing measures and urging Mayor Bill de Blasio to close schools in New York City. When Mr. de Blasio resisted doing so, Mr. Daskalakis threatened to resign, a city official said. City Hall has said the mayor was never told of the threat.

Now, Mr. Daskalakis appeared headed for a clash with the governor.

Unlike so-called diagnostic tests, which determine whether someone is currently infected, often using nasal swabs, blood tests for Covid-19 antibodies may reveal whether a person was previously exposed and has developed an immune response. Some tests may also measure the amount of antibodies present.

Howard A. Zucker, the state health commissioner, said New York’s test had been developed in a state lab that had been given blanket approval for such tests by the F.D.A.

He said that while the city was right to raise concerns about some tests on the market, the state’s test is reliable enough to determine immunity — and, possibly, send people back to the office.

“It is a way to say this person had the disease and they can go back into the work force,” Dr. Zucker said. “A strong test like we have can tell you that you have antibodies.”

But he cautioned that the length of any such immunity remained unknown. “The amount of time, we need to see. We don’t know that yet,” he said, adding, “They will last a while.”

In New York City, about 21 percent, or one of every five residents, tested positive for coronavirus antibodies during the state survey. The rate was 16.7 percent in Long Island, 11.7 percent in Westchester and Rockland Counties, and 3.6 percent in the rest of the state.

Almost 14 percent of those tested in New York were positive, according to preliminary results from the state survey, which sampled approximately 3,000 people over two days at grocery and big-box stores.

The governor suggested on Thursday that, based on the survey, the death rate in New York from Covid-19 would likely be far lower than previously believed, possibly 0.5 percent of those infected.

More than 15,000 people have died of the virus in the state, a figure that does not include an additional 5,000 people in New York City who were never tested but were presumed to have died from the disease.

The number of deaths has been increasing less quickly, and new hospital admissions for the coronavirus have remained relatively flat over the past three days: about 1,350 patients per day, down from over 2,000 per day last week.

Mr. Cuomo said antibody testing results, along with hospitalization numbers, would influence the state’s reopening strategy, noting that the number of people being hospitalized was still too high to consider easing restrictions.

The state’s plan would involve tracking infections as restrictions are loosened on gatherings and businesses. Antibody testing would be used, Mr. Cuomo said, for identifying coronavirus survivors who can donate convalescent plasma — the part of the blood that contains antibodies — for a treatment that is being tested on patients with the virus at the Mount Sinai Health System in New York, and elsewhere.

On Thursday, Mr. Cuomo did not talk about any potential for immunity among those previously infected.

After the city’s alert appeared on Wednesday night, the Greater New York Hospital Association, a powerful group with close ties to the governor, sent its own message to its member hospitals, suggesting that the city’s warning was overblown and highlighting how it differed from the state Health Department’s approach.

The state Health Department “explains the types of results one might get, what they MIGHT indicate, and what they should not be relied upon to do,” wrote Susan C. Waltman, the association’s general counsel.

She said the tests do provide value, particularly in adding to information about the virus and the disease it causes, Covid-19; she contrasted the city’s “absolute, rather dismissive terms” with what she described as an approach from the state that “tries to put the test results in perspective.”

The discussions were led by Dr. James Crawford, Northwell Health’s senior vice president for laboratory services. Dr. Crawford said in an interview that as of this week, the state’s major medical institutions estimated that they could perform between 5,000 and 10,000 antibody tests per day. They expect to increase that number significantly in the coming weeks and months, he said.

Dr. Crawford said there was a “pressing need to have both parts of the equation — who has the virus and who has mounted an immune response, to have as much as we possibly can brought forward so that we can now help our society get back to the things we need to do.”

But he cautioned against using antibody testing as a criteria to allow people into the world. “To use it as a fulcrum for when someone can travel or work, I think we have to be extremely careful as a society in doing that,” he said.

Some health experts say that if tests return high rates of false positives — results that incorrectly report a person has antibodies — they could encourage people to abandon protective measures and risk worsening the virus’s spread. Others warn that the true value of coronavirus antibodies is still unknown.

“I’m very ambivalent about these tests, because we don’t really know yet through the science what it means to have an antibody,” said Dr. Joan Cangiarella, the vice-chair of clinical operations at NYU Langone Health’s pathology department.

“We are hoping these antibodies mean you will be immune for some time,” she said. “But I don’t think the data is fully out there to understand if that means that you’re actually immune. And if these antibodies start to decline, what’s that time frame? Does it decline in a year from now?”