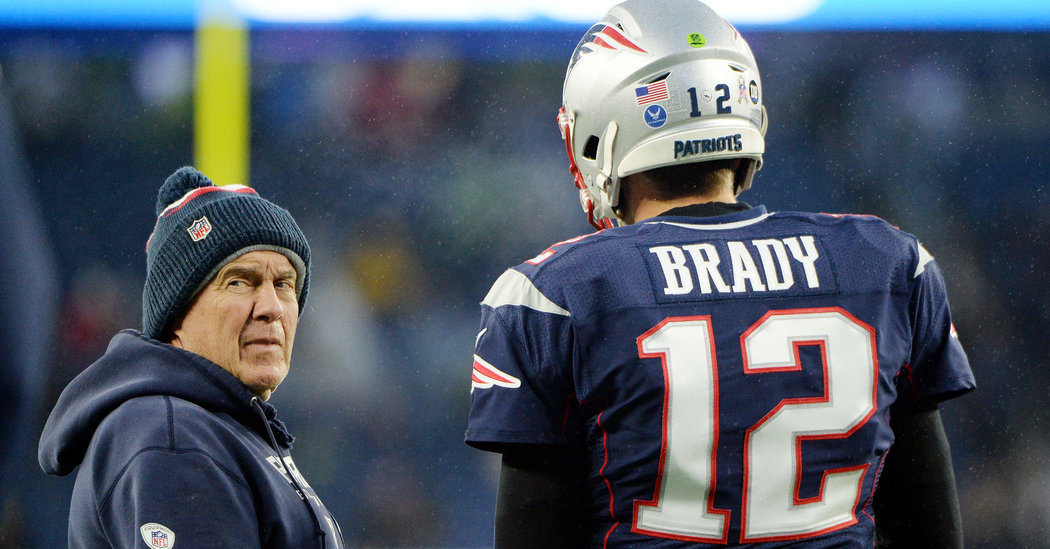 Even the tight-lipped Bill Belichick admits that this week’s N.F.L. draft, and this year’s off-season, will be vastly different from any other for the New England Patriots in this century.

“Over the last two decades, everything we did, every single decision we made in terms of major planning, was made with the idea of how to make things best for Tom Brady,” Belichick said in a conference call with reporters last week.

Now it’s the Tampa Bay Buccaneers who are trying to build around Brady, something made more obvious when they traded for the former Patriots tight end Rob Gronkowski on Tuesday. If the idea of that duo playing home games in Florida still takes some getting used to, consider this: In New England, the quarterbacks on the roster are Jarrett Stidham, who has four career pass attempts (with one interception) and Brian Hoyer, a 34-year-old journeyman who has lost 12 of his last 13 starts at the position.

“Not sure exactly how that’s going to go,” Belichick said when discussing the competition to find a new quarterback.

Hold on. Tom Brady, nothing short of a deity in New England, has skipped town, and the man most responsible for his departure hasn’t a clue how he’s going to replace him?

It is a response that has many in the pro football community wondering what Belichick might have up his sleeve, especially since the coach is renowned for having a meticulous plan to resolve any consequential quandary he has ever faced during his 45 years in the league.

Which leads to the start of the draft on Thursday, when the usual intrigue surrounding the Patriots is heightened by the notion that the team could trade one of its best current players or package next year’s first-round pick with other assets to move up and select either Tua Tagovailoa or Justin Herbert, the quarterbacks likely to be taken after L.S.U.’s Joe Burrow, the expected first overall pick.

That kind of trade is not the usual Patriots way. They like to hoard draft picks. But there are mitigating factors — most obviously, the need for a franchise quarterback, something the Patriots probably won’t find with their current first-round pick, the 23rd over all. Given their winning track record, the Patriots seem unlikely to be in the sweepstakes for Clemson quarterback Trevor Lawrence in next year’s draft, either.

And finally, the Patriots are probably going to have to trade a top player to create salary cap space. They currently have about $1 million in cap space, which isn’t enough to sign even their incoming draft class. But packaging, for example, the All-Pro guard Joe Thuney with a valuable 2021 pick would free up $15 million in cap space and maybe garner the high first-round selection that yields Tagovailoa or Herbert on Thursday.

It’s also true that Belichick loves to shock his N.F.L. colleagues by doing something radical or at least unconventional, so Stidham — whom Belichick calls “Stid” — could still be the plan under center. Having watched Stidham in the preseason and in practice sessions, Belichick undoubtedly knows the quarterback’s capabilities. After Brady’s rookie season in 2000, the Patriots knew they could uproot Drew Bledsoe if necessary. In that light, maybe Belichick is planning moves with the knowledge that his team has talent to build on at quarterback.

But don’t expect the rest of the N.F.L. to buy that just yet. Belichick’s Patriots have been making the rest of the N.F.L. jumpy and paranoid for too long, and the silence from Foxborough about the team’s plans to replace Brady has people expecting a Patriots gambit involving a quarterback. Adding fuel to that suspicion was New England’s hiring of Eliot Wolf as a personnel consultant last month. Wolf, a former Cleveland assistant general manager who also spent 14 years in the Green Bay front office, is the son of the longtime N.F.L. executive Ron Wolf.

Ron Wolf was general manager of the thriving 1990s Packers, and an influential figure in draft circles. His best-known maxim was that an N.F.L. team should select a quarterback in some round of every annual draft. Wolf was also very close to Bill Parcells, one of Belichick’s early mentors.

“I would be surprised if by Friday night, the Patriots don’t pull a quarterback off the board in this draft,” said Mark Dominik, the former Tampa Bay general manager who is now an analyst for SiriusXM N.F.L. Radio. “Whether it’s in Round 1, 2 or 3 — just to be in competition. Because they’ve had success in finding guys who can compete in this league at that spot.”

As with many players in the pre-draft process, there is disagreement about whether Tagovailoa or Herbert has the better N.F.L. future. And almost all of it has to do with Tagovailoa’s recovery and durability after recent hip surgery.

“Will Tua be there playing for you this year? Yes, but the real question is: Will he be there in 2023 or 2024?” said Gil Brandt, the former longtime Cowboys executive and another SiriusXM analyst. “All these doctors are giving good reports on Tua, but they don’t say what his shelf life will be.”

Belichick, however, will not be going into that medical evaluation blind. Nick Saban, Tagovailoa’s coach at Alabama, has been friends with Belichick for roughly 40 years, and the duo talk and share information frequently.

There are other quarterback options, too, including Jalen Hurts, whom Saban benched for Tagovailoa, although not before Hurts had a productive Alabama career. Or the Patriots could return to one of their favorite tactics and use a later-round pick for a quarterback.

Brady, famously, was a sixth-round selection, and Stidham was drafted in the fourth round. Or New England could dip into a free agent market that will be revived after this week. Cincinnati’s Andy Dalton should be available if the Bengals take Burrow as expected, although that would still mean New England had to clear cap space.

The Patriots are nonetheless in new, Brady-less territory. Belichick agreed with that point, but he was not tipping his hand.

“The circumstances will be different this year,” he conceded last week, “and we’ll see how everything plays out.”