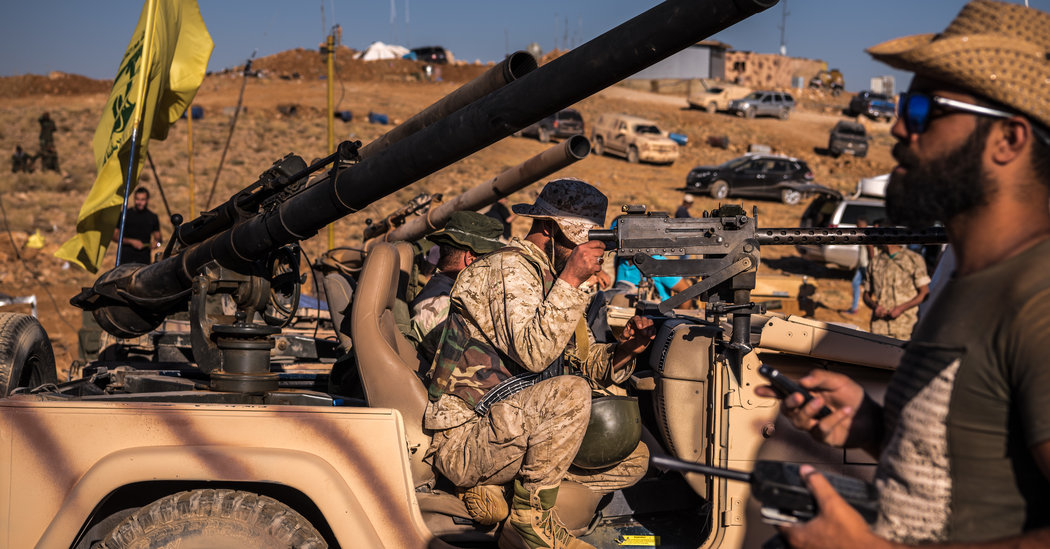 BEIRUT, Lebanon — When the missile exploded near the black Jeep Cherokee, three Hezbollah operatives leapt out and ran for cover.

A moment later, appearing to know they had time, they returned to get their bags, and strolled away before a second missile obliterated the SUV.

No one was killed or wounded in the Israeli attack on the Hezbollah team in Syria last week, but that was the point.

According to several current and former Israeli and Middle Eastern officials, Israel has adopted a policy of warning Hezbollah operatives in Syria before bombing their convoys to avoid killing them and risking a devastating war in Lebanon.

The attack, which was caught on closed-circuit video, exposed a new wrinkle in the informal rules of engagement between Israel and Hezbollah, the Lebanese militant group, as both sides prepare for what could be the next big war while trying to avoid setting it off.

Israel’s policy of pre-strike warnings in Syria, which has not been previously reported, reflects its fear of engaging Hezbollah’s vast rocket arsenal even as it tries to draw a red line to prevent Hezbollah from acquiring and developing precision-guided missiles, which it sees as a strategic threat.

But while Israel has not hesitated to kill Iranians in Syria, where the chaos of a nine-year civil war has allowed a host of powers to operate, it has largely refrained from killing members of Hezbollah.

Hezbollah operatives in Syria have received surprise phone calls from Israeli officials warning them to evacuate their bases before they are bombed, according to an official from the pro-Iran regional alliance. And the first missile fired at the Hezbollah Jeep last week was a deliberate miss, a warning shot aimed at forcing the men to flee so their gear could be destroyed, an intelligence official said. The plan failed in this case because the men retrieved their bags before the car was hit.

But the idea, a senior Middle Eastern intelligence official said, is to tell Hezbollah, “We can see you, even if we don’t kill you.”

Hezbollah, too, for all of its heated rhetoric about destroying the Jewish state, has refrained from killing Israelis in recent years, apparently also fearing a war that could destroy much of Lebanon.

Two days after the Jeep attack in Syria, Israel accused Hezbollah of cutting holes in the fence along the Lebanon-Israel border and hanging a poster of its leaders and of Qassim Suleimani, the powerful Iranian general who supported Hezbollah and who was killed in an American drone strike in January.

Amin Hoteit, a retired brigadier general in the Lebanese army who is close to Hezbollah, said the gesture was a way for Hezbollah to send a nonlethal message to Israel, thumbing its nose at Israel’s attack and demonstrating that its operatives could cross the border if they chose to.

Since the Israeli strike had killed no one, “Hezbollah’s response came without casualties,” General Hoteit said.

“This is the new warfare,” said Randa Slim, a senior fellow at the Middle East Institute in Washington. “There is going to be precise targeting of individuals and key operatives in what Israel deems an existential threat to its security, which is the precision-guided missiles of Hezbollah.”

But the tactic of warning shots and efforts to strike equipment instead of people may get Israel only so far, she said.

“If the precision-guided missile project is going at the rate the Israelis are saying, eventually they are going to start killing these people.”

Israeli officials believe that Hezbollah has an arsenal of more than 100,000 missiles and rockets that can reach all corners of the Jewish state. Israel’s Iron Dome missile defense system would be unable to shoot down a large volley of rockets fired simultaneously, officials say, and Israel’s defense relies in part on the fact that the rockets are not very accurate.

But Israel contends that Hezbollah is trying to build guided missiles, which could target key installations such as military bases, government buildings or power plants, and would be nearly impossible to stop. Israel has carried out numerous airstrikes in Syria on what it says were convoys of weapons bound for Hezbollah to drive home the point that it will not accept a fleet of smart missiles on its border.

Last August, Israel sent an exploding drone into the heart of a Hezbollah-dominated neighborhood in Beirut to destroy what Israeli officials described as machinery vital to the precision-missile production effort. But in order to avoid killing Hezbollah members, the attack took place before dawn when no one was around, the senior Middle Eastern official said.

The warning tactic is an extension of one that Israel pioneered in Gaza. When the Israeli military wanted to destroy weapons caches hidden in a civilian home, it would drop a nonexplosive or low-powered explosive on the roof to warn the inhabitants to leave before the building was bombed. The tactic is nicknamed “knock on the roof.”

As Hezbollah moved into Syria, first to bolster the forces of President Bashar al-Assad against the rebels and later to expand the group’s military apparatus pointed at Israel, Israel began using the technique there as well. When applied to vehicles, like the drone strike last week, it is nicknamed “knock on the bumper.”

The Jeep Cherokee that was struck last week had just crossed from Lebanon into Syria, despite the border being closed because of the coronavirus pandemic, and had no license plates.

A senior Hezbollah operative, Imad Kraimi, was in the car, according to the member of the pro-Iran regional alliance and the senior Middle Eastern official who, like other officials interviewed for this article, spoke on condition of anonymity to discuss intelligence matters. Mr. Kraimi works with a Hezbollah unit in charge of smuggling sophisticated weapons, the intelligence official said.

Surveillance video of the SUV, verified by The New York Times, shows it stopped alongside a highway after the first missile strike. The three passengers, including Mr. Kraimi, flee the car, leaving their doors open, but then return and unload a number of duffel bags and backpacks before shutting the doors and moving away again.

Moments later, the second missile hits and the car explodes in a cloud of smoke.

The Middle Eastern intelligence official expressed frustration that the men had managed to retrieve their gear.

“It looks as if one of them remembers he had forgotten the shopping of milk and eggs that his wife had told him to get and he even goes back for them,” the official said. “Is this the might of the strongest power in the Middle East?”

Hezbollah has not commented on the attack.

The tactic has caused a rift between Israel’s military leadership and its spy service, the Mossad.

The military brass believe that warning Hezbollah militiamen while destroying their equipment creates a balance of deterrence while avoiding a spiral into war.

“Adhering to these unwritten rules has allowed us to hit Hezbollah again and again, alongside the war against other targets across the Middle East, without being drawn into an all-out war,” a former senior military official said.

But the Mossad chief, Yossi Cohen, doubts that Hezbollah, Iran and their allies could muster a significant military threat to Israel and argues that Israel should not establish a balance of deterrence with a militia that Israel and the United States consider a terrorist organization. Terrorists, he argues, should be killed based on operational needs and not spared because of fear of a response.

The only message to send Hezbollah’s leader, Hassan Nasrallah, “is that he must not try us,” Mr. Cohen said in a discussion with Israel’s military chiefs. “It makes no difference what he fires against Israel — extended-range Grad missiles, or M-600 rockets or anything else — the moment that happens, he and his entire organization will be totally wiped out.”

So far, the military’s caution has mostly won out, although Israel did kill two Hezbollah operatives last August in an attack that Prime Minister Benjamin Netanyahu said prevented the imminent launch of “killer drones” from Syria toward Israel. A spokesman for the Israeli military declined to comment, as well as the spokeswoman for the Israeli prime minister’s office, to which Mossad reports.

Israeli airstrikes in Syria in recent years have killed hundreds of Iranians, Syrians and Iranian-backed militiamen from Iraq and elsewhere. But these strikes have killed as few as 16 Hezbollah operatives since 2013, according to the Syria-based member of the pro-Iran axis in the region.