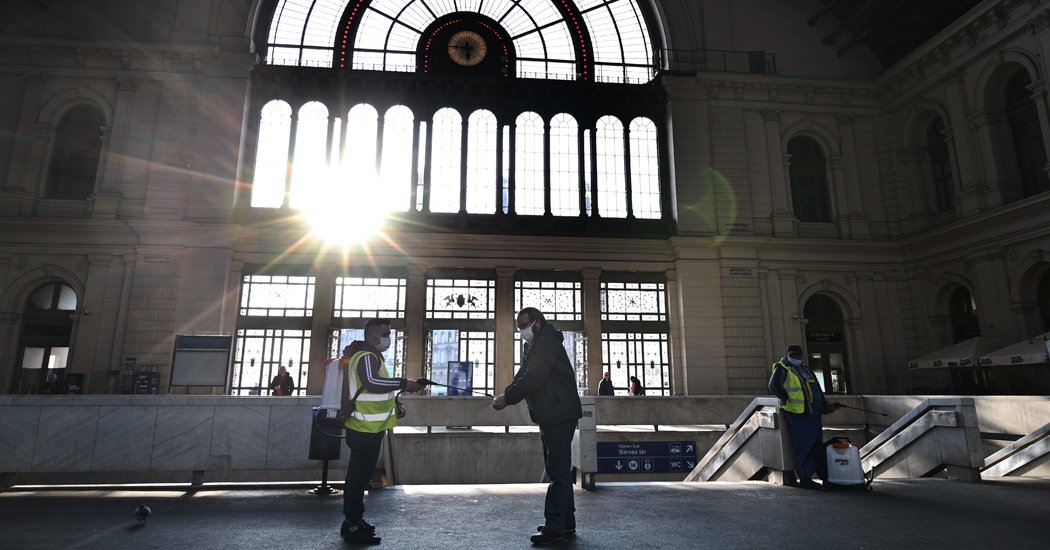 BRUSSELS — The governments of Poland and Hungary are using the coronavirus crisis to enhance their authority and punish political opponents, and the European Union, as so often, appears reluctant to do more than criticize.

Even worse, critics say, the European Union has been funneling money into both governments with little oversight or requirement to respect the rule of law and democratic values that are the heart of the European project.

Prime Minister Viktor Orban of Hungary is exercising emergency powers granted to him by the Parliament he dominates to deny opposition mayors sizable tax receipts in the name of new virus funding controlled by the central government.

Poland’s government, led by the Law and Justice Party of Jaroslaw Kaczynski, is planning to go ahead with presidential elections on May 10, despite a virus lockdown that prevents opposition candidates from campaigning effectively. The government is pushing a bill to require all 30 million or so votes to be cast by postal ballot, which the postal union says is absurd and impossible.

At the same time, Poland’s government is pushing ahead with changes to the courts, creating a chamber of “extraordinary control” that will be charged with certifying the elections. Nor is it clear if Warsaw will bow to a ruling by the European Court of Justice, the highest in the European Union, ordering it to suspend a new “disciplinary chamber” of the Supreme Court.

Last Friday, the European Parliament passed a resolution criticizing the activities of both governments during this coronavirus crisis as “totally incompatible with European values.”

Not for the first time, the Parliament called on the European Commission, the bloc’s executive arm, and the national government leaders who gather as the European Council to revive a sanctions procedure that could result in both countries losing their voting rights.

But the resolution is effectively toothless, and sanctions require unanimity, with Poland and Hungary each promising to veto sanctions aimed at the other.

Instead, the commission has provided them even more money.

In a hasty effort to show that Brussels is doing something to help during the virus crisis, the commission repurposed 37 billion euros — about $40 billion — in structural aid funds, designed to help newer and poorer members, for virus aid. The result: Hungary and Poland each got considerably more money than virus-ravaged Italy or Spain.

According to the European Stability Initiative, a research institute, Italy got €2.3 billion, while Hungary, with a sixth of its population and fewer virus cases, got €5.6 billion — 3.9 percent of its gross domestic product. Poland got €7.4 billion.

Gerald Knaus, a founder of the group and a critic of undemocratic politics in Hungary and Poland, said it was an absurd distortion that should lead to “a wake-up call’’ for Brussels.

While the commission admitted that this was not “an optimal allocation,” Mr. Knaus said that “it was, however, a perfect deal for Viktor Orban,” who only three days before had claimed that the European Union had “done nothing” for Hungary during the crisis.

The irony, Mr. Knaus said, was that the funds were released the very day, March 30, that the Hungarian Parliament, citing the virus, gave Mr. Orban the right to rule indefinitely by decree.

Mr. Orban has since taken over a publicly controlled company and declared land occupied by a Samsung factory to be a “special economic zone” — taking away its tax receipts, which provided one-third of the municipal budget to a town, Göd, run by the opposition, and giving them to the Pest County Council, where his party has the majority.

“The commission has done nothing meaningful to stand up to Orban but has helped him,” Mr. Kelemen said, while the council of heads of state and government has not wanted to confront one of its own. “The E.U. provides money without accountability,” he said.

The European Union, which is traditionally reluctant to interfere in domestic politics, must begin to add conditions to its massive structural aid funds, Mr. Knaus said. Those should include respect for democracy, the rule of law and the European Court of Justice, he said, noting that even the Marshall Plan, designed by Washington to help rebuild Europe after World War II, had political conditions attached.

Mr. Kelemen agrees, noting that Hungary is no longer characterized as a full democracy by groups like Freedom House, while Mr. Orban creates what he calls an “illiberal’’ state.

Peter Kreko, director of Political Capital, a Budapest research institution, said that so far the government has been careful not do anything under the emergency decree that it could not have done otherwise. “But what has been done so far has been pretty horrible,” he said.

Hungary’s justice minister, Judit Varga, has accused Brussels of double standards. “They are condemning us on the basis of false accusations, like the government is weakening the emergency oversight of Parliament, despite the fact that Parliament continues to remain in session,” she told Hungarian news agency MTI.

But there is little doubt that Mr. Orban’s tactics have served as a model for Poland’s Mr. Kaczynski.

Law and Justice has pushed a similar narrative, saying that Warsaw has been left to fend for itself because European institutions are helpless, no aid is forthcoming and European “solidarity” is a myth.

Mr. Kaczynski told the newspaper Gazeta Polska that the pandemic had exposed “the weakness of the European Union” and the need for reform, proving “the crucial significance of nation states,” whose “internal affairs should not be interfered with.”

The government insists the election will go ahead despite the lockdown.

President Andrzej Duda, backed by Law and Justice, has had a prominent role in the virus response and holds a significant lead over five challengers, hovering close to the 50 percent needed to win in the first round.

With large public demonstrations impossible, Parliament is also pushing ahead bills restricting abortion and sex education, which caused huge protests in the past.

“It’s absolutely impossible to organize a fair postal voting in the time frame we have,” said Jan Grabiec, spokesman for Civic Platform, the main opposition party. “The government is setting up an election that will most likely be questioned by state and European authorities.”

His predecessor, Judge Wojciech Hermelinski, was more explicit. “It’s against all rules,” he told the broadcaster TVN24. “Those elections will not be universal, equal, anonymous. They will have no chance of being recognized not only in the country, but mainly by international organizations.”

The European commissioner for values and transparency, Vera Jourova, said last week that a postal vote had raised “concern,” since it would be “a huge change.”

But given the virus, Mr. Kaczynski told state-run Polish Radio that this would be the only way to hold safe elections. He himself suggested that the ballot could not be postponed for a year, because by then Poland would be struggling with an economic crisis and Mr. Duda’s chances of winning would be slimmer.

“People always blame the authorities under such circumstances,” he said.