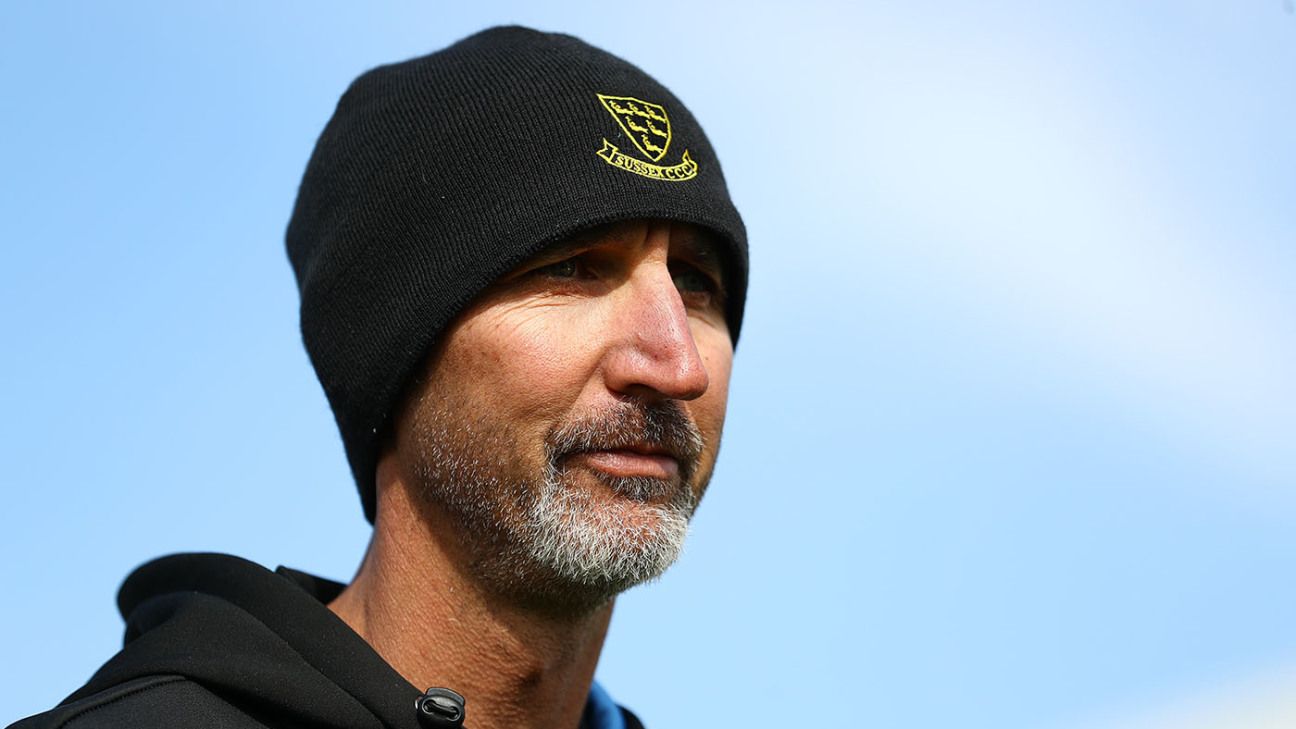 Jason Gillespie is used to long-haul flights thanks to a long playing career and holding down coaching roles in two different countries, but his March travel itinerary would make even the most seasoned traveller wince.

Soon after he flew from Adelaide to Cape Town via Dubai for Sussex’s pre-season camp, it became clear that the coronavirus pandemic meant it was unwise for the county’s squad to be overseas, meaning that after a week in South Africa he was on the move again, flying back to the UK. And 48 hours after landing, amid constant conversations with the club’s hierarchy, he was in the air heading back to Australia, when it became clear the county season would be postponed for some time.

“It was a bit of whirlwind, that’s for sure,” Gillespie said. “The situation changed quite quickly, and quite considerably in a matter of days. The plan was to try and get everyone back safely to the UK. I was in my flat in Hove and had a couple of conversations with our CEO [Rob Andrew].

“The club said: look, you’re probably best to be at home with your family. I had to self-isolate for two weeks. I’m fortunate that my mum lives in a little house just round the corner from where we are, so I stayed at hers. I had the kids coming down with my groceries and leaving them on the back porch.”

ALSO READ: The Hundred’s future uncertain as ECB board prepares for postponement

Self-isolation complete, Gillespie is back with his family and feels safe: there has not been a new confirmed case of Covid-19 in South Australia for three days, and there are signs that an end to lockdown may not be too far away.

But there is a complication. Australian citizens are currently banned from travelling abroad indefinitely, and while there is naturally little clarity on the likely duration of restrictions, Prime Minister Scott Morrison has repeatedly suggested a six-month time frame is likely. That means that if the delayed English season is able to get underway – and the ECB board will meet on Thursday to discuss contingency planning – there is no guarantee that Gillespie will be able to get back to fulfil his role.

“We just have to wait and see,” he said. “There’s so many logistical things to consider. If the season does get up and running, I’d probably have to self-isolate in the UK before I can link up with the squad – if I can even leave Australia.

“I haven’t been thinking about it too much, because we simply don’t know. We’re all in the same boat, where health and safety are the priorities. We’ll have to wait and see: I know [Surrey coach] Michael di Venuto is in that boat too, and a good mate of mine who lives here in South Australia Mark Cosgrove plays at Leicestershire. What does he do?”

Derbyshire coach Dave Houghton is in the same position as di Venuto and Gillespie: he is currently in Zimbabwe with his family, with no clarity over when he will be able to return to the UK. Other non-British coaches – Adi Birrell (Hampshire), Stuart Law (Middlesex) and James Franklin (Durham) – are currently in England.

Similarly, while several counties have cancelled or deferred the contracts of their overseas signings – Gillespie hopes that Travis Head will be able to join Sussex in 2021 if he is unable to play for the club this year – there are question marks hanging over several cricketers who count as ‘local’ players via EU passports or the Kolpak loophole, but are not currently in the UK. While Dane Vilas and Simon Harmer, for example, are in England, Stiaan van Zyl, David Wiese and Vernon Philander are among various players in South Africa with no clarity over the prospects of leaving.

There is some hope that Thursday’s ECB board meeting might provide some kind of clarity about the likelihood that a season will be possible, but it seems probable that those overseas will be left in limbo until government advice is updated and an end to the UK’s lockdown comes into sight.

For the time being, then, there is little that Gillespie can do to change things. Instead, he has been reaching out to his squad to keep in touch – “the mental side of all this is really important” – and is enjoying an unusually long period at home with his family.

“That’s the one good thing – I don’t think we’ve ever spent this much time together as a family ever, with my job and the nature of cricket. I’m doing my running to keep busy, and one of my sons has challenged me to slam dunk a full-sized basketball, so I’ve been doing all kinds of jumping training, skipping, lots of plyometrics.

“On my birthday [Monday] I did a jumping session with the kids, and slam-dunked a size three, so my son said: ‘dad, why don’t you try and dunk the bigger one?’ With my last jump I reckon I ripped my quad, because I’ve been struggling to move for the last few days.” Needless to say, struggling to move may prove to be a theme of the next few months.