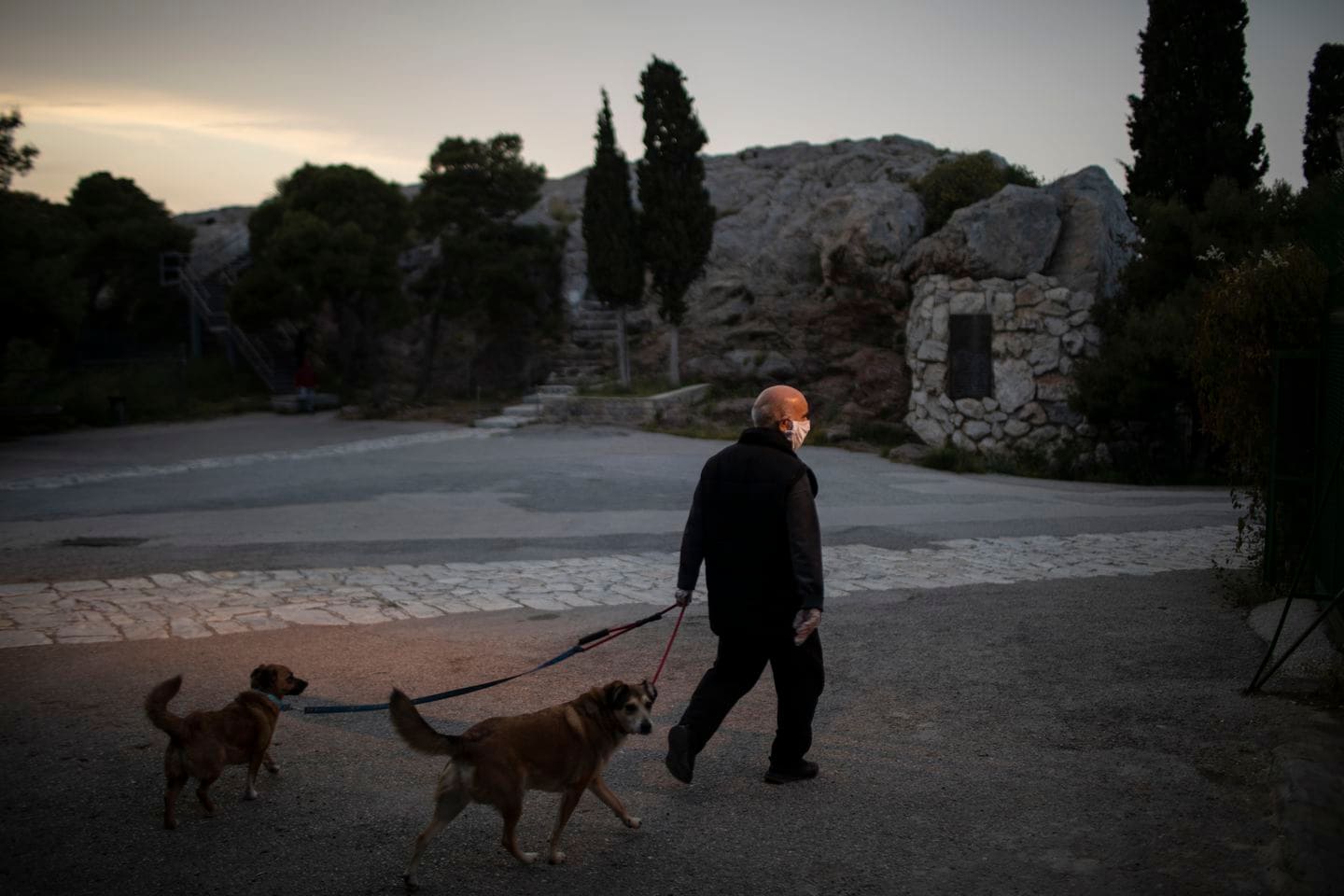 But to the surprise of many here, Greece so far has avoided that dire scenario, emerging instead as an example of how even a vulnerable country can contain the virus if it moves quickly and persuades people to take the threat seriously.

“We showed our best self,” Prime Minister Kyriakos Mitsotakis said. “And this . . . fills us with pride, it arms us with more courage to keep fighting.”

While Mediterranean neighbor Italy continues to announce daily death tolls of about 500, Greece, with one-sixth the population, has never recorded a daily toll higher than nine. Its total death toll stands at 121, among 2,408 confirmed cases. The government has indicated that it will lift restrictions beginning in the first half of May.

“People thought that Greece’s health system wouldn’t be able to cope,” said Alexander Kentikelenis, a professor of political economy and sociology at Bocconi University, in Milan. He said the government responded quickly, aware of the potential problems, and the “good results gave people new hope.”

In a sense, Greeks were prepared for this crisis by their experience with a decade of deep economic depression. They needed little convincing that a global event could again upend normalcy.

But, in a painful twist for a country that had only begun to emerge from its financial hardship, even a successful response against the virus won’t stop the fallout. Indeed, Greece is forecast to face one of the heaviest economic blows in Europe, because of its immense dependency on tourism. The same industry that helped pull the country out of recession is now poised to send it spiraling again.

Greece shut down its society later than many other countries in Europe did, but relatively early in terms of the progression of its coronavirus outbreak. Greece closed schools on March 10, when it had fewer than 100 confirmed cases. It shuttered cafes, restaurants, museums and shopping centers on March 13, after the first death, and it imposed a national lockdown on March 23, when the death toll stood at 17. By contrast, when Italy extended its lockdown to the entire country on March 10, more than 460 people had died. When Spain imposed its national lockdown on March 14, it had recorded 190 deaths.

Greece was particularly on guard about its hospitals. Health spending shrank by more than 30 percent during the crisis years, leaving the country with fewer than 600 intensive care beds for a population of 11 million. And scores of doctors left the country as part of a recession brain drain. So, going into the coronavirus outbreak, Greece knew its system couldn’t withstand much strain.

“Other countries, with much better hospital infrastructure and more ICU units per population, maintained an illusion that their systems would be able to cope, so they delayed [countermeasures],” said Yannis Tountas, the head of Greece’s Institute for Social and Preventive Medicine.

Staff at Athens hospitals started undergoing training to handle the virus as early as January, said Elena Karabatsaki, a consultant of general medicine at the Gennimatas Hospital, one of the capital’s biggest. In addition, by mid-April, the government had increased ICU beds by 50 percent.

Still, the health system has been lucky that the outbreak hasn’t tested its capacity, that public hospitals have never had more than 100 intensive care beds occupied by coronavirus patients at any one time.

“The system has difficulties coping with significantly less than a pandemic,” Karabatsaki said. “We remain underfunded and understaffed.”

Much remains unknown about the novel coronavirus, and Greece has had some advantages in its fight. The virus exploded around the globe during the down season for Greek tourism. The country also lacks the density and interconnectedness of harder-hit nations in Europe, such as Spain and Italy.

Greece also has been tremendously fortunate that the virus doesn’t seem to have hit its severely overcrowded island migrant camps, where more than 40,000 people live in squalid conditions with no ability to protect themselves from the virus or much else. Aid workers have described those camps as ticking time bombs for the virus. Under pressure from the European Union and aid agencies, the Greek government has promised to transfer 2,380 migrants who are elderly or have preexisting conditions to the mainland.

Migrants on the mainland may live in high-risk conditions, too, though. Greece reported this week that 150 people tested positive for the virus in a hostel occupied by migrants and refugees. The hostel has been placed on a two-week quarantine, and six doctors were added to the local hospital.

But on the whole for Greeks, their coronavirus response has brought about a sense of pride that has been lacking at least since the country hosted the Olympics in 2004.

“The Greeks were starting with low expectations,” said Nick Malkoutzis, editor of the economic and political analysis website MacroPolis.

Greek governments, one after the next, have struggled with far more modest tasks than drawing up a pandemic response. And Greek citizens have regularly pushed back against basic public safety measures, including rules on bike helmets and against smoking in public places.

This government’s message to stay home, though, has been accepted and embraced.

The message has been promoted by famous Greeks, who advise people to meticulously wash their hands, and say grandparents should only see their grandchildren from a safe distance — behind a window.

A more unlikely star has emerged in Sotiris Tsiodras, an infectious diseases expert and health ministry spokesman. According to polls, two-thirds of Greeks tune in at 6 p.m. each day to his televised “progress report.” Sitting behind a desk in a brightly lit room, he goes through the numbers and latest medical advice. The dry reports are often followed by personal thoughts and remarks on unity and compassion, often resembling a sermon. Their humanity strikes a chord with many Greeks.

But there are serious challenges ahead, including the concerns about the economy.

A recent Organization for Economic Cooperation and Development report, looking at the impact of lockdowns on more than 40 advanced countries, predicted Greece would face the sharpest economic hit.

The tourism sector accounts for an estimated 25 percent of the Greek workforce — more than a million jobs. Right now, all of that is on ice. And while Greeks expect that their country will eventually be able to pitch itself as a relatively safe destination, it is unclear when global travel restrictions will allow foreigners to vacation as easily as they used to.

Miltos Palatzas, 29, from Kozani, a town in northern Greece, had studied accounting when the financial crisis started unfolding but then moved into hospitality and is now managing a restaurant at a luxury hotel.

“It was a compromise,” Palatzas said. “But when you live in crisis you have to adapt. Tourism has been the one sector faring well. Maybe this will now change.”